It's a big, wonderful world out there. Especially when seen through the eyes of a curious youngster ...

This past week was an exciting one for baby giraffe, Hasani. He is doing really well, doesn't need his therapeutic shoes anymore, and is reaching all the milestones that a healthy little (not so little) giraffe calf should reach at two months old.

Hasani explores the savanna with his family. https://youtu.be/euu4WYTw4Ic

Hasani's most recent adventures involve wandering beyond the barn and the corral area to explore the savanna. Like many babies, he is curious and seems to enjoy taking in new sights, sounds, and tastes. He is also making new friends, in the form of a group of helmeted guineafowl.

Hasani's keepers tell us he is inquisitive, but also cautious about investigating new things. Seeing and sharing the habitat with other African animal species will eventually become routine for this calf. But for now it's perfectly fine to take things slowly. And when all else fails, it's always good to stay close to mom, Olivia, Aunt Tufani or dad, Dave—the adult giraffes in his family.

In addition to the guineafowl, Hasani has met some of the gazelle on the savanna, too—but he hasn't yet come face to face with other animals there, like the zebra or ostriches. That will come later . For now, Hasani will be on the savanna as weather permits. But if he's not out there, you can probably find him and his family hanging around the yard next to their barn. 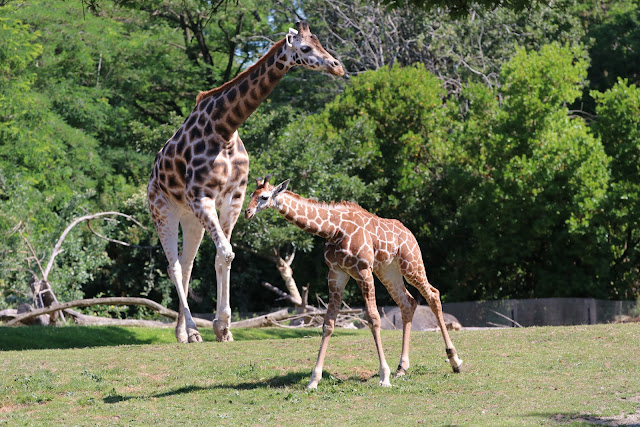 Hasani's parents, Olivia and Dave, were paired under a recommendation made by the Giraffe Species Survival Plan, a cooperative, conservation program across accredited zoos to help ensure a healthy, self-sustaining population of giraffes.

Woodland Park Zoo participates in 111 Species Survival Plans, overseen by the Association of Zoos and Aquariums (AZA). Led by experts in husbandry, nutrition, veterinary care, behavior, and genetics, these plans also involve a variety of other collaborative conservation activities such as research, public education, reintroduction and field projects. 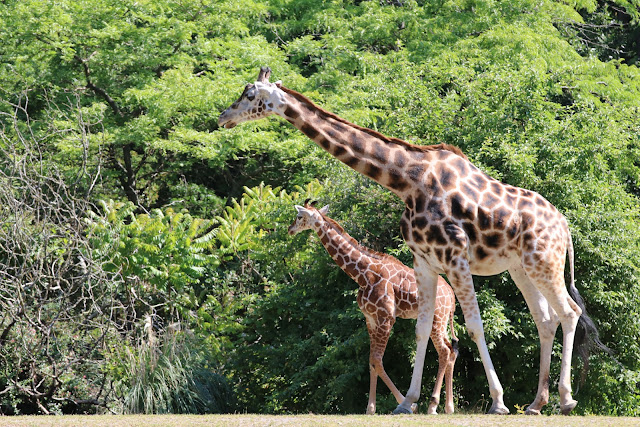 Giraffes are widespread across southern and eastern Africa, but new population surveys estimate an overall 40 percent decline in the giraffe population; fewer than 100,000 exist today. Of the currently recognized subspecies of giraffe, five have decreasing populations, while three are increasing and one is stable.

Giraffe enthusiasts can stick their necks out for giraffes and help support conservation efforts by visiting Woodland Park Zoo and supporting the Wildlife Survival Program, which includes the Giraffe Conservation Foundation. The Foundation seeks to provide the first long-term ecological monitoring effort of the Angolan giraffe—an important desert-dwelling giraffe subspecies in north-western Namibia.


How about becoming a ZooParent in honor of Hasani? Adopt now and help fund wildlife conservation programs and the daily care and feeding of our baby giraffe, mom Olivia and all zoo inhabitants. Visit www.zoo.org/zooparent to adopt today! Visit http://www.zoo.org/conservation to learn more about the zoo’s conservation partnerships taking place in the Pacific Northwest and around the world.