Woodland Park Zoo is proud to be part of the Western Pond Turtle Recovery Project. Western pond turtles were once plentiful up and down the coast of Washington to northern California and down to Baja, Mexico. However, loss of habitat, commercial exploitation for food, disease, drought, and introduced predators, such as bullfrogs and large-mouth bass, have decimated populations of the species.

By the early 1990s, only about 150 Western pond turtles remained in two populations in Washington state and the species was nearly extirpated from our region. In 1991, Woodland Park Zoo joined forces with Washington Department of Fish and Wildlife (WDFW) to recover Western pond turtles by initiating a head-start program, and in 1993 the state officially listed the species as endangered. Oregon Zoo partnered with the project in 2003.

Each spring, WDFW biologists go in the field to monitor the turtles every few hours during the nesting season to locate nesting sites. To facilitate this work, they place transmitters on some of the females, in order to track their movements. When the females lay their eggs, a portion of the eggs can be collected and transported to Woodland Park Zoo for incubation. Hatchlings are also collected from another site and sent to the Oregon Zoo for rearing.


The eggs are incubated in special boxes under controlled conditions until they hatch, then the baby turtles are head-started for almost a year until they reach a size that's too large for them to be eaten by many of their common predators.

Unlike wild turtles, these pampered babies are kept in a temperature-controlled habitat and are fed throughout the winter under the care of our expert zoo staff. By summer, they are nearly as big as three-year-old turtles that grew up in the wild. During their stay here, they are regularly weighed and measured to make sure they’re meeting all the needed health milestones to be released back into the same native wetland locations where the eggs were originally collected the previous summer.


Before they’re released, the turtles are examined by veterinary staff, weighed and marked for identification, so their progress can continue to be monitored.


Today, thanks to collaborative recovery efforts over nearly 30 years, more than 2,100 turtles have been head started and released every year, and surveys indicate that more than 1,000 of the released turtles have survived and continue to thrive at the six protected sites.

While slowly making its way toward recovery, the Western pond turtle population still faces threats such as continued loss of suitable habitat, invasive bullfrog predation and wildlife disease—so our work must continue.


The Western pond turtle is one of 19 species that are part of the Association of Zoos & Aquariums’ (AZA) SAFE (Saving Animals From Extinction) initiative, which focuses on the collective expertise within AZA’s accredited institutions and leverages their massive audiences to save birds, mammals, reptiles, fish and invertebrates that are at risk. AZA and its members are convening scientists and stakeholders to identify the threats, develop action plans, raise new resources and engage the public. AZA SAFE harnesses the collective power of all AZA-accredited zoos and aquariums and invites the public to join the effort.

What can you do on World Turtle Day?

Vote YES for Turtles on August 6: The King County Parks Levy is up for renewal on August 6, 2019. Vote yes for our parks to protect and preserve thousands of acres of forests and open space throughout the county. In addition King County Levy funding directly supports critical areas of Woodland Park Zoo operations and programming including our endangered Western Pond Turtle Program and our Silverspot Butterfly Program. Learn more at https://www.kcparksforall.com/

Keep waterways clean: Limit the use of pesticides and chemicals in your yard and never let oil, grease or fertilizers leak into places where storm water run off can carry them into our waterways.

Support wetlands conservation: Wetlands protect our shores from wave action, reduce the impacts of floods, absorb pollutants and improve water quality for all.

Other things you can do: There are so many ways to show your love for our local turtles and to keep waterways clean for wildlife and people. Pick up any trash you see along shorelines, use native trees and shrubs in your landscaping, and help replant our urban forests and shorelines.

Any actions you can take, big or small, are turtlely awesome and worth shellebrating! 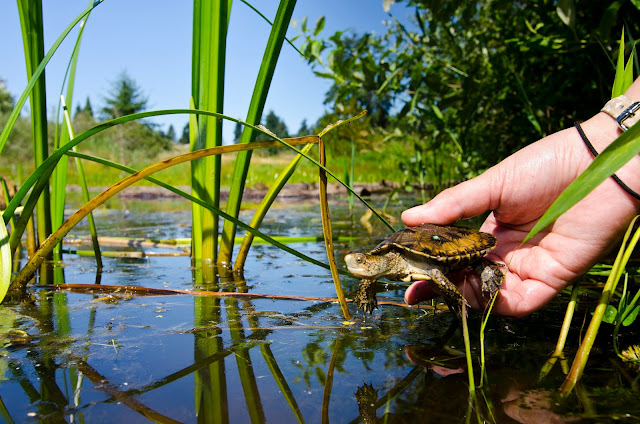