Inside a conservation commerce workshop in Mongolia

Four large work areas, lots and lots of wool and fifty-plus people make for an action packed and fun-filled day! Well, actually, five days—but time passes quickly when you are working hard AND having fun and that is exactly what we've been doing. Introducing new ideas and discussing techniques and topics is challenging enough in one language and twice as lengthy and challenging when going through a translator.

Challenges aside, this is important work. We’ve come here with the Snow Leopard Trust to help expand the line of conservation commerce handicrafts made by these local craftspeople that are then sold through the Trust’s Snow Leopard Enterprises, Woodland Park Zoo’s ZooStore, and other markets, bringing money back into these communities. The point is to offer an eco-friendly income alternative to poaching in snow leopard territories, and the success of these efforts to date is what has brought us here—it’s time to expand the program, develop new techniques for better efficiency, and explore new products and styles to keep the crafters’ business thriving. 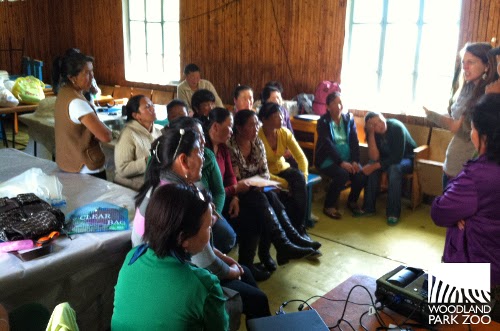 Our mornings start out with informal but structured visual presentations on the history of the partnerships between the herders, the Snow Leopard Trust and Woodland Park Zoo. Then we break for morning tea. Each tea break is a new treat as each of the groups has brought along their favorite hot beverage mix and snack to share. Tea is a loosely applied term referring to either powdered instant coffee mixes or true tea bags. Snacks range from wafer cookies to biscuits and dried cheese curds. The Swiss, the French and the Wisconsinites have nothing on the Mongolians when it comes to intense passion for their cheeses! Who knew that dried cheese curds came in such a variety of shapes, sizes and range of flavors? Who knew they went so well with instant coffee or Buckthorn berry tea? 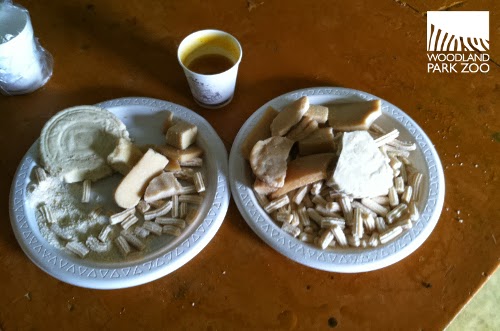 For seven to eight hours each day, we all worked diligently on teaching, learning and refining techniques for felting handicrafts that can be sold as conservation commerce. Participants were shown how to weigh wool so that they knew specifically how much wool is needed to create a specific item. This is a valuable tool that helps them manage their own raw wool inventory and gives them a base to calculate and develop their personal businesses as craftspeople. It also assures higher quality and consistency for each product. With greater consistency in production, the crafts folk have the potential to increase their business and the Trust will have a stronger product line to promote for them, thereby creating a win-win situation for the producers, their communities, the Trust and MOST importantly, the snow leopards! 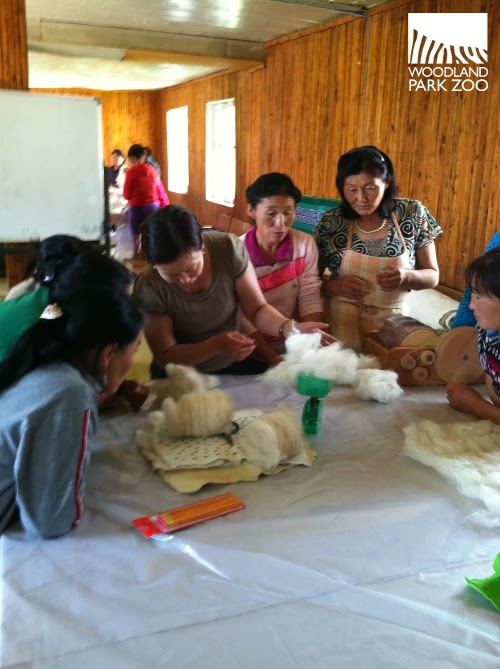 One of the most rewarding things for me to witness is the openness and collaboration between all involved in the workshop. As an artist myself, I can relate to the creative process and with it the sometimes difficult challenge of letting go of one's designs. Imagine a scenario with five designers, all of whom have been working for months to develop new designs, coming to teach the basic techniques to the crafters and then having to let go and watch the students take off with it. 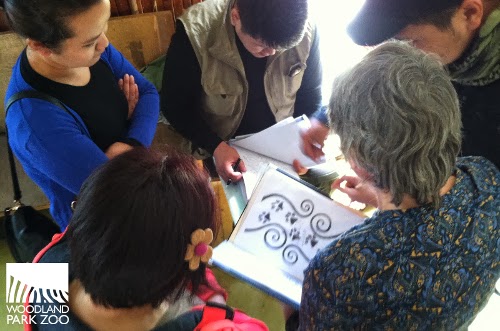 It is difficult to capture in words the dynamics of a room full of energetic and enthusiastic artists. I can only hope that the pictures help convey that—despite the language barriers—each day unfolded into a new and exciting collaboration as old stitching traditions were renewed and reworked to capture, simplify or improve a design. The participants taught the trainers just as much as they had received, and in the end, the new product samples are highly encouraging. 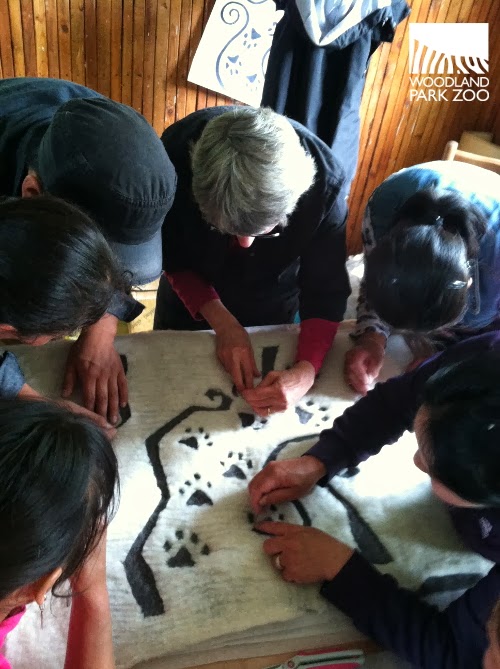 After seven, hard-working days in the shadow of beautiful Turgen Uhl peak, our workshop ended with a celebration but not before a conservation-focused service project where we all donned rubber gloves and spent an hour or so cleaning up the stream bed and surrounding grounds. In the end, many bags of trash, broken bottles, rusted cans and more were removed from the watershed. It was a positive note to end a successful workshop. 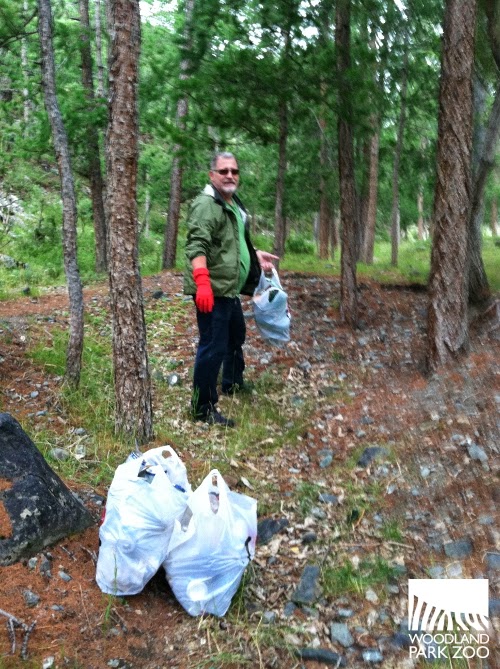 The ever-generous and hospitable Mongolians strategically kept our training delegation away while they set up a nearby hall for a farewell party. The appearance of some government secret service piqued our curiosity and we eventually found out that the Prime Minister himself was slated to visit that evening. Apparently he was born in the region and was making his annual tour to inspect the parks and the roads. In a feat of irony that only Mother Nature can provide, a late-afternoon thunderstorm and subsequent deluge washed out part of the road, so unfortunately no P.M. sightings occurred. The party went on as planned and after much toasting and serenading (by each community), parting gifts were exchanged, someone hooked up their playlist and we all danced, laughed and said our heart-felt goodbyes. 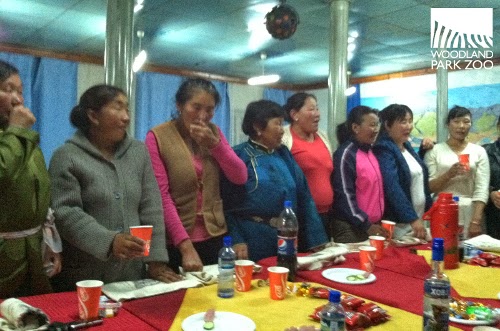 The following day dawned clear and sunny and shortly after leaving the camp it became readily apparent that the wash-out that foiled the Prime Minister's visit was indeed very real. So real in fact that we almost couldn't get back to Ulaangom ourselves. Our resourceful driver managed to maneuver around the 20 foot wash-out, we got back to town, and I enjoyed my first real, albeit cold water shower in over a week! 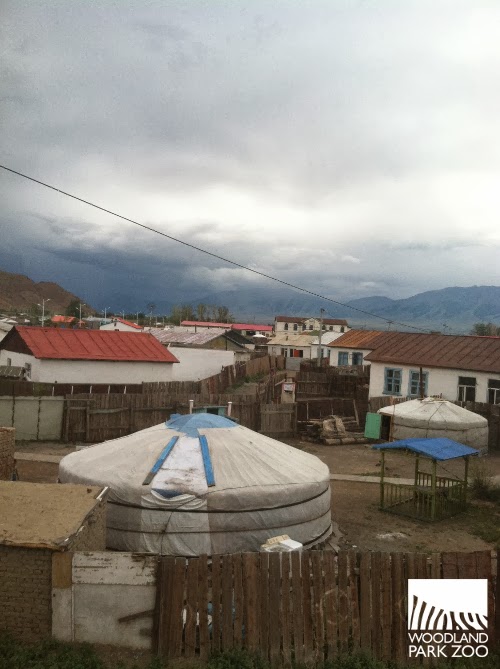 Lake Uvs is the largest lake in Mongolia and the second largest lake in Eurasia. It is broad, shallow and four times saltier than the ocean due to its land-locked location. It is surrounded by critical wetlands, borders Russia and carries Mongolia's "Highly Protected region" status.  It is also a popular local recreation area. In a ride comparable to Mr. Toad's infamous wild ride, we piled into the tiny van and rocketed across the flatlands to the lake. After a relaxing swim/float and a culturally appropriate vodka offering to the lake spirits, we toasted our successful workshop and our newly forged friendships. 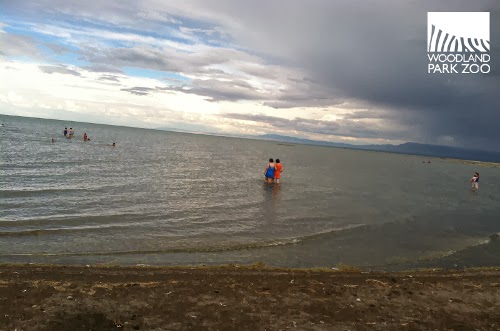 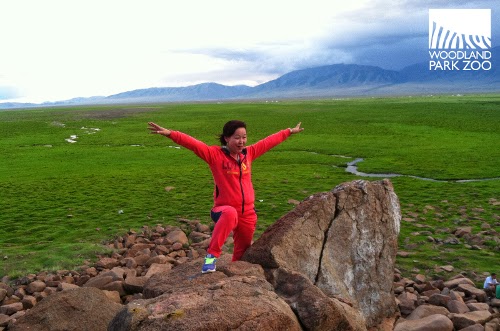 The remaining two days in the enigmatic and beautiful country of Mongolia mostly involved crossing the vast countryside, meeting the rest of the hard working Mongolian Snow Leopard Trust staff and, of course, picking up a few things at the State owned department store for the folks back home. 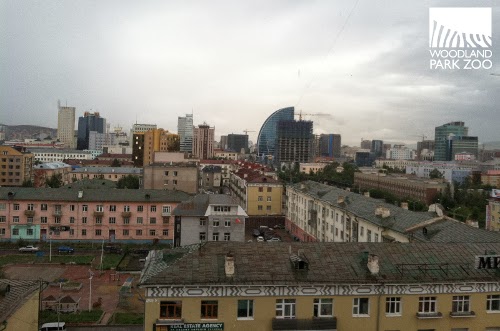 If all goes well this winter (and there is no reason to expect less), the Mongolian crafters will be delivering many new product samples and eventual additions to the existing line including felted bowls, new ornaments, pet mats and slipper designs. Be sure and check in with the ZooStore to see them! 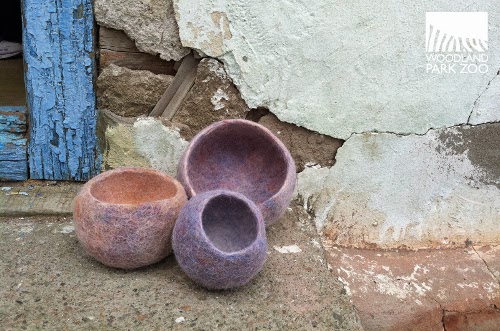