May 18, 2011
Posted by: Rebecca Whitham, Communications


UPDATE (5/23) - Nearly 400 people submitted name ideas and after narrowing it down to our top 5 choices, "Kaa" came out the winner with 44% of the vote! You can come meet "Kaa" (named for the Jungle Book character) in the Day Exhibit.

We’ve got a big, new squeeze at the zoo—a 100-pound, 8-year-old male reticulated python now on view in the Day Exhibit. We need your help to name him! 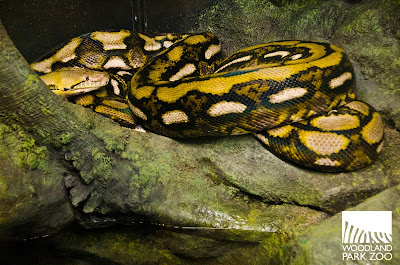 We’re collecting your name suggestions via our Facebook page through May 13, noon PST (complete instructions on our Facebook page). Zookeepers will select their five favorite names from the submissions and fans will then vote on May 17 on the zoo’s Facebook page for their top pick.

The reticulated python is the longest snake in the world, with some rare specimens exceeding 30 feet in length and weighing 300 pounds, though its average size is 10 to 20 feet in length. As a constrictor, the python is not venomous but kills its prey by wrapping around it and suffocating it.

Like many reptiles, the reticulated python species is diminishing in numbers due to habitat destruction and hunting for their meat and skins to make leather products or souvenirs. The species’ range extends from Myanmar and India, across Southeast Asia and on many of the islands of the Philippines and Indonesia.

Anonymous said…
I think the name "Monty The Python" would be an appropriate moniker for this very fascinating animal.

Anonymous said…
How about any of these?