World Penguin Day is today, April 25, a special day to celebrate all penguins on the planet and the recent hatching of three Humboldt penguins at Woodland Park Zoo.

The three chicks hatched to three different sets of parents at the end of March and the first week in April. Most penguins mate for life. Incubation for penguins takes 40 to 42 days, with both parents sharing incubation duties in the nest and day-to-day care for their chicks.


Woodland Park Zoo has one of the most successful Humboldt penguin breeding programs in North America with its new hatchlings bringing the total number of successful hatchings to 80 since the zoo’s first breeding season in 2010, a year after the penguin habitat opened. The sex of the chicks is unknown until DNA testing can be conducted.

The chicks are off exhibit in nesting burrows where they are under the care of the parents. To ensure they are achieving growth milestones, staff routinely weigh them as they develop with minimal disturbance to the parents.
“All three chicks are thriving and experiencing great weight gains under the excellent care of their parents,” said Shawn Pedersen, an interim bird curator at Woodland Park Zoo. “These charismatic birds continue to be one of the most popular species at the zoo. Our new chicks and the colony will continue to inspire action at home to help ensure Humboldt penguins survive into the future.”

Before the new chicks reach fledging age and go outdoors on exhibit, they will have round-the-clock access to a shallow pool where they can learn to swim in a more controlled and less crowded environment. New chicks join the colony in the outdoor habitat and spacious pool sometime in early summer.
The parents were paired under the Humboldt Penguin Species Survival Plan (SSP), a cooperative, conservation breeding program across accredited zoos to help ensure a healthy, self-sustaining population of penguins.

World Penguin Day pays tribute to one of the most unique and specialized bird families that live on the planet. There are 18 species of penguins, whose natural habitats are all in the southern hemisphere.


Woodland Park Zoo supports Humboldt penguin conservation in Punta San Juan, Peru, a marine reserve. Approximately half the entire Humboldt penguin population in Peru calls Punta San Juan home. It is one of the 10 most important breeding sites for other birds such as cormorants, terns, pelicans and boobies and is home to large populations of South American fur seals and sea lions, too. The program protects this critical coastal habitat, educates local communities and local Peruvian schools about marine conservation, provides safety for the breeding birds with a protective wall, and conducts ongoing research including the use of drone surveillance for population surveys. 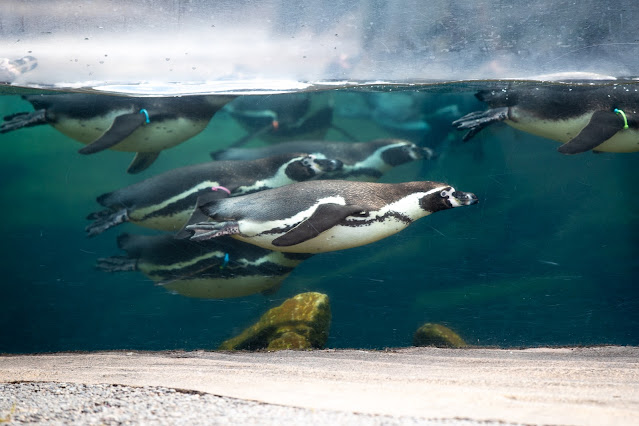 How to help penguins


To celebrate the new penguin chicks, become a ZooParent! The ZooParent program supports the zoo’s animal care, education, and wildlife conservation in the Pacific Northwest and around the world. You can also celebrate by becoming a zoo member.