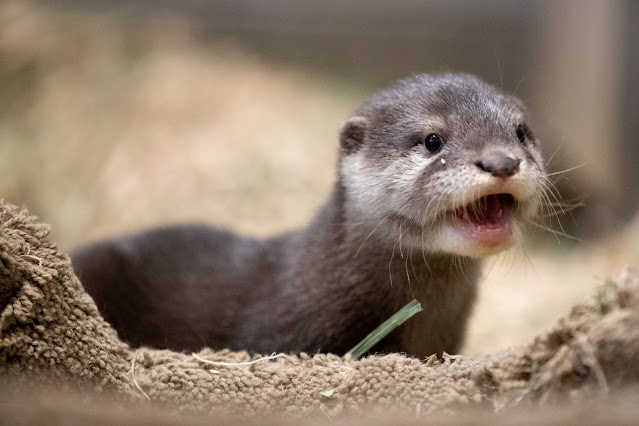 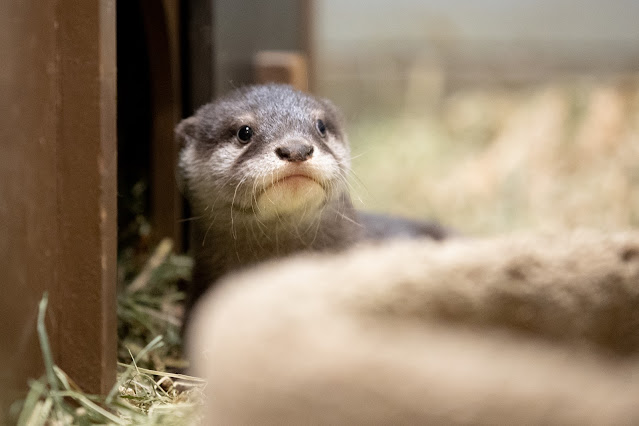 The 2-month-old pup is the first offspring for mom Little Frei and dad Conner. Little Frei was among the last litter born in 2016 at Woodland Park Zoo and was named after Seattle Sounders goalkeeper, Stefan Frei. The parents were paired under the Asian Small-clawed Otter Species Survival Plan. Species Survival Plans are cooperative breeding programs across accredited zoos to help ensure healthy, genetically diverse, self-sustaining populations of select species or subspecies.

Asian small-clawed otters are very social, gregarious animals. Both mom and dad feed and help care for their young. At birth, the pups weigh about 1½ ounces, a little more than a slice of dense, whole-grain bread! Newborns can’t see or hear so they fully depend on the nurturing care of both parents until they begin developing their senses at about 3 weeks old.
Sotong currently lives off view in a maternity den with her parents. Occasionally, the parents will go outdoors for short bouts in the public exhibit but prefer staying indoors to focus on caring for their pup. Staff closely monitor Sotong but are hands off as much as possible with little to no intervention except for wellness exams.
As part of Woodland Park Zoo’s exemplary animal care program, its veterinary team conducted the pup’s first of a series of wellness exams this week. “We’re pleased to give Sotong a clean bill of health. She’s robust and healthy, her belly is full and round, and she’s within normal growth range at 2 months old,” said Dr. Tim Storms, Woodland Park Zoo’s interim director of animal health.

Asian small-clawed otters are markedly more vocal than most otter species with at least 12 different vocalizations. “Sotong’s high-pitched squeals and chirps ring loud and clear, an excellent sign that she’s bonding with her parents,” said Martin Ramirez, mammal curator at Woodland Park Zoo. “She has a healthy appetite and is gaining increased mobility. While she continues to nurse, she’s sampling solid foods such as capelin, lake smelt and trout.
Parents Little Frei and Conner have started swimming lessons for their daughter. “They’re first teaching Sotong how to swim in a plastic tub. After she masters the tub, she’ll graduate to the next level: the outdoor exhibit and large pool where she’ll be taught to dive a few inches deep while the vigilant parents stay closely by her side,” explained Ramirez. “We’ll let mom and dad teach at their own pace and comfort level. Once Sotong can swim and safely navigate the outdoor exhibit, we should officially introduce her in early March in the zoo’s Banyan Wilds, where visitors will come to fall in love with this charismatic species.”

Asian Small-clawed Otters, Did you know? 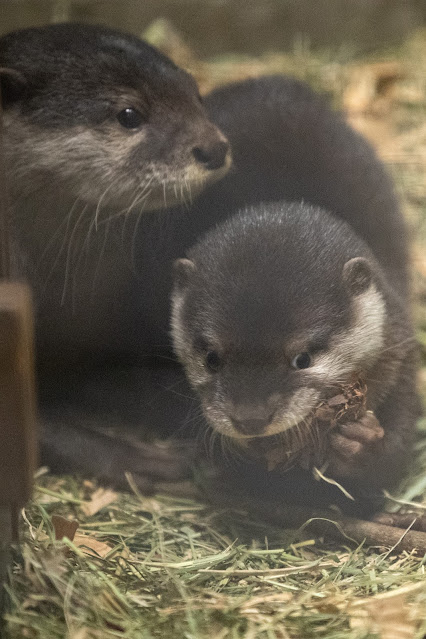 Hope for Otters and other Mustelids

Woodland Park Zoo collaborates with conservation partners working in Asian forests to help protect the habitats otters and so many other species depend on for survival. Learn more about the zoo’s international conservation efforts through its Conservation Partners.
Buy wisely. Choose Forest Stewardship Council (FSC) certified paper and wood products to protect forest habitat and wildlife. By purchasing FSC-certified forest products, consumers help to protect otter habitat by encouraging sustainable forestry and limiting overharvest of forest products (timber, fuelwood, fruits and honey). Without the FSC label, timber may come from illegal logging and forests that are not responsibly managed.
Become a digital ZooParent by adopting an Asian small-clawed otter. ZooParent adoptions help provide exceptional care for all of Woodland Park Zoo's amazing animals and support wildlife conservation efforts in the Pacific Northwest and around the world.
Otters in the Northwest
Asian small-clawed otters belong to a group of mammals called mustelids. This includes the two otters found in Washington—the sea otter and the river otter—as well as a variety of other closely related predators such as weasels and mink.

Woodland Park Zoo is a leader in mustelid conservation in the Pacific Northwest and is working on the recovery of wolverines and fishers in the north Cascades, both of which were driven to extinction in the state by the fur trade around a century ago. Wolverines have recently begun to return naturally in small numbers, while fishers were recently purposefully reintroduced to the state. Woodland Park Zoo is also working on marten recovery in the Olympics.
Join us in taking Northwest conservation actions that benefit people, wildlife and PNW landscapes at wearelivingnorthwest.org

Anonymous said…
So excited to see the new baby! Was she the only one born? The previous litters were larger, but maybe it's normal for a first time mom to just have one?
February 11, 2022 at 10:32 AM

Unknown said…
By far these cuties are the ones that make us smile most of all!!! So thrilled to have a youngster to cause a little havoc for the adults this summer, just like a Kraken should!! :)
Maybe we will hear Sotong's chirps and squeals from inside the nursery when we visit today. Congratulations Frei and Conner, well done on the little one!!
February 12, 2022 at 12:01 PM