So small, SO cute: Tiny pudu baby has a name!

World, meet Ande! Woodland Park Zoo’s baby Southern pudu, a male born in July, officially has a name. While Ande may be one of the world’s smallest deer, he’s actually named after the second-highest mountain range in the world—the Andes Mountains! It’s also where pudu like Ande are native to.

Ande is growing very quickly! At about 2 months old, he’s already half as big as his parents. But even fully grown, pudu are only about 15 inches tall. Some of his favorite snacks are romaine lettuce, banana peels and nutritional grain. The spots on his coat have already started to fade and will continue to fade as he grows and matures into his adult coat.

Ande was named by Ellie Woodall, a budding animal lover from Richland, Wash., whose grandparents have been great zoo supporters for many years. 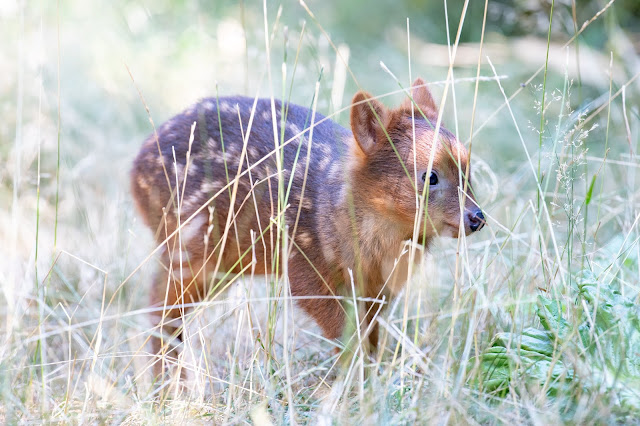 If you want to catch a glimpse of Ande and his family, head to the zoo’s Temperate Forest habitat, right next to the flamingos.
Want to help support amazing care for babies like Ande and all our animals? All for Animals Giving Day is just around the corner (September 22) and this year you YOU can choose to support one or more of the issues that are most important to you. We've set up campaigns for animal care, saving species, animal welfare research, education and more! Get more info and make your gift anytime between now and September 22nd here. Thank you!