After a zoo head start, these turtles are ready for the wild!

Today was graduation day of sorts for our “class of 2021” western pond turtles. 35 of the endangered youngsters—one of only two turtle species native to Washington state—were released back into the wild this morning in a protected wetland in Pierce County. It’s all part of Woodland Park Zoo’s Western Pond Turtle Recovery Project, which is celebrating its 30th Anniversary. It’s an occasion that hasn’t gone unnoticed by state leaders, as Governor Jay Inslee has proclaimed August 8–14, 2021 as “Western Pond Turtle Recovery Week.”

In 1990, there were only about 150 western pond turtles left in Washington, and the species nearly went extinct. In 1991, Woodland Park Zoo and Washington Department of Fish and Wildlife (WDFW) joined forces—starting a head start program to help save them. In 1999, Oregon Zoo joined the recovery team and, over the years, other nonprofits, government agencies and private partners have contributed to the multi-institutional conservation project.
Each year, western pond turtle eggs are collected from the wild and taken to places where they can safely hatch and grow through the winter. We've had nearly 40 of these juveniles living behind the scenes at Woodland Park Zoo this year, where they have been fed and kept warm. Once the young turtles reach about 2 ounces—big enough to escape the mouths of non-native predatory bullfrogs—they are ready to be returned to the wild.


This morning’s informal release ceremony marks the beginning of the next chapter for these youngsters. Among those celebrating with us and helping to release the turtles today were some of our elected officials, including U.S. Representative Marilyn Strickland, Washington State Representative Peter Abbarno and Pierce County Councilmember Jani Hitchen.
Each turtle was gently placed into the water one by one. They all took to their new home right away, paddling into the pond, where they can bask on logs, swim around the mud banks, dine on insects, amphibians and aquatic plants—and, eventually (fingers crossed) make more little turtles!


Collaborative recovery efforts over the last three decades have resulted in more than 2,300 turtles being head started this way, and self-sustaining populations re-established in two regions of our state: Puget Sound and the Columbia River Gorge. Surveys indicate that approximately 800 to 1,000 of the released turtles have survived and continue to thrive at six sites.
Become a ZooParent!
Show support and celebrate the Western Pond Turtle Recovery Project by becoming a Digital ZooParent and adopting a western pond turtle! All ZooParent adoptions help fund the care of all the animals at Woodland Park Zoo, as well as support the zoo’s wildlife conservation programs in the Pacific Northwest and around the world.

For the young artist in your family, you can download a fun coloring sheet here. 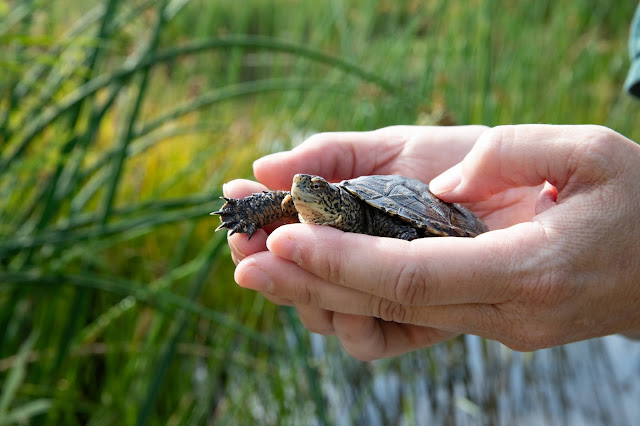 Other ways to help save turtles