March 10, 2021
Posted by Kirsten Pisto, Communications
Photos by Jeremy Dwyer-Lindgren/Woodland Park Zoo
We have some red panda updates for you! Over the past year, you’ve been watching Hazel and her joyful cubs Tián and Zan learn and grow. Now, the cubs are as big as mom and are ready to have some more time on their own. Hazel, who has been an absolute gem of a red panda, will be moving on to her new home at Memphis Zoo for breeding with a new male. 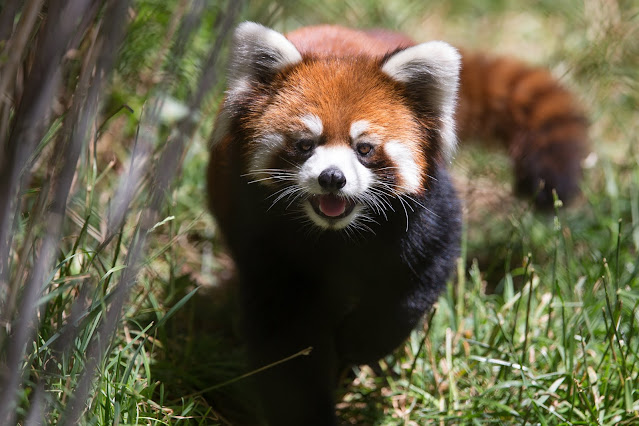 Hazel is leaving Woodland Park Zoo at the end of March. She arrived at Woodland Park Zoo in 2017 to be paired with Yukiko under the Red Panda Species Survival Plan (SSP), a conservation breeding program across accredited zoos to help ensure a healthy, self-sustaining population of red pandas.

Hazel has had two pairs of cubs with Yukiko, the most recent cubs (born May 25, 2020) Tián and Zan will remain here together until fall 2021 when they will leave for their new homes according to the Species Survival Plan (SSP). Until then, the almost-fully-grown cubs will remain on exhibit where they are used to hanging out together. Tián means “sweet” in Mandarin, her twin brother is named Zan meaning help and support. Both names are Mandarin, a nod to the species’ native land in China. Red pandas are found in the southern Himalayan foothills, from India to China and as far south as Myanmar. How do you tell them apart? Zan has much lighter fur than his sister Tián! 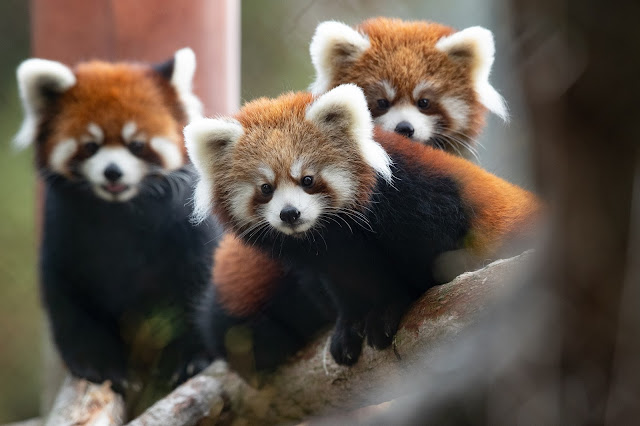 In 2018, Hazel and Yukiko had twin cubs, females Zeya and Ila. The community voted to name one of the red panda cubs Zeya, meaning success in Burmese. The second red panda cub was named Ila, meaning earth in Sanskrit. Zeya went to Northeastern Wisconsin Zoo & Adventure Park in Green Bay, Wisconsin and Ila went to Toronto Zoo in Ontario, Canada. The red pandas completely stole our hearts, and although we were sad to see them go, we were very happy that as part of the Red Panda Species Survival Plan, they were able to begin their new adventures where they eventually started their own families.

Meanwhile, both Carson and Yukiko, our male red pandas, will remain off view to guests to allow Tián and Zan full exploration of their habitat. The two males are spending time in their separate behind the scenes outdoor yards with access to their cozy indoor spaces and dedicated keepers.

While we are always a little sad to see any animal leave, we are confident that Hazel will continue to be an absolutely fantastic red panda and quickly adapt to her new home, mate and keepers. We will miss her floofy red hair and fierce snacking! 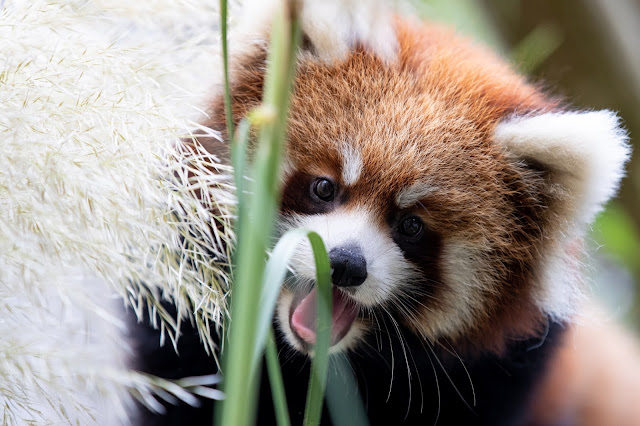 As part of our red panda update, we’re throwing Hazel a virtual good luck party, and we wanted to kick it off with a Q and A with a few of her dedicated animal keepers Shannon and Shawn...

Where is Hazel going?

Hazel is leaving for Memphis Zoo at the end of March.

What do you enjoy most about working with Hazel?

She has been a wonderful mother, and she’s very cute, friendly, and easy to work with. Hazel is also an important part of the Species Survival Plan (SSP), and her cubs are important to red panda conservation.

When animals leave for another institution, what is something you do to help prepare them for the move?

We prepare them by getting them comfortable with the travel kennel that they will be moved in. Hazel eats her breakfast and dinner in the crate, so she is already used to being in there. We also work closely with vet staff to make sure that she is healthy enough to travel.

Do you pass along information to their new animal keepers, if so, what sort of things do you tell them? What will you tell them about Hazel?

We have an Animal Data Transfer form that will go to her new animal keepers. It describes what the current living space looks like, what her diet is, her favorite enrichment items, as well as any medical or behavioral information.

As for Hazel herself, she is inquisitive, confident, and a joy to take care of!

Hazel has been a mom twice now, to cubs Ila and Zeya in 2018 and Tián and Zan in 2020, can you describe her behaviors with her cubs?

Hazel is a devoted mother that takes very good care of her cubs. Even now, she will commonly sleep next to them. 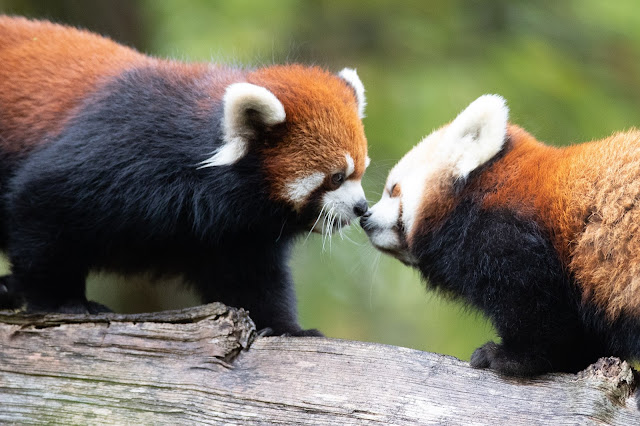 How can you tell the cubs are ready to leave mom?

The cubs stopped nursing quite a while ago and have been eating solid foods , but they have started spending more time independently. They’re at the age that they would naturally separate from mom in the wild.

Other than for breeding and when a female is raising cubs, they are solitary animals.

Her cubs are growing up! Tell us a bit about Tián and Zan, what are they up to these days?

They spend their days eating, playing and sleeping! They mostly play with each other, and less and less so with mom. Tián is more confident and inquisitive like her mom. Zan is a bit more shy, and less likely to investigate new things. Both of them are very food motivated, especially for grapes and apples.

With Hazel leaving, will the cubs remain together until they leave in the fall?

Yes, the plan is for them to stay together until their possible move to new zoos in the fall.

What is Hazel’s favorite treat?

Apples, grapes and blueberries are her favored treats.

What is something folks might not know about Hazel?

In the morning, Hazel will be awaiting her keeper’s arrival for breakfast. She will stand on her hind legs and rest her front paws on the keeper’s leg. It’s a fun interaction, and it’s always nice when they are interested and excited to see you. 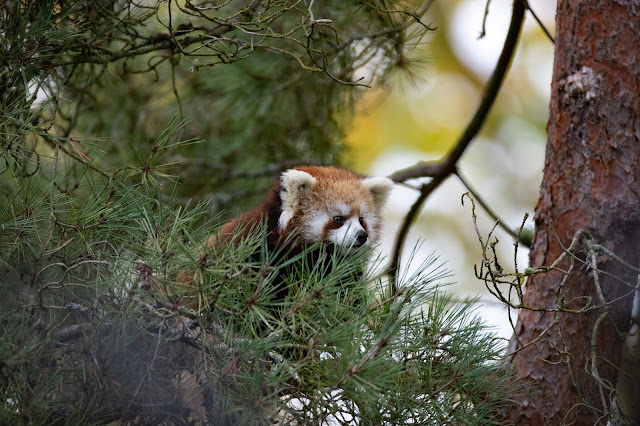 What will you miss about having her here at Woodland Park Zoo?

We’ll miss how easy going and beautiful she is with her colors and markings. Also, that she is such a good mom and how much joy she’s brought to her keepers and our guests by raising two sets of cubs.

What have you learned by working with Hazel and her cubs?

Red pandas were a new species for her current keeper, and Hazel has helped inspire her learn a lot more about the natural history of red pandas!

Red pandas are an endangered species. What are your hopes for this species?

Habitat preservation is the biggest hope, which will allow space for the red panda population to grow.

What would you ask folks to do to help red pandas?

Visiting the zoo as it helps provide funding that goes to conservation, and it also helps create appreciation for red pandas and support other organizations that conserve red pandas and their habitat. You can also support the Endangered Species Act--99% of species protected under the Endangered Species Act have survived and are on the path to recovery.

Can visitors see Hazel and cubs until she leaves at the end of March (any special hours)? 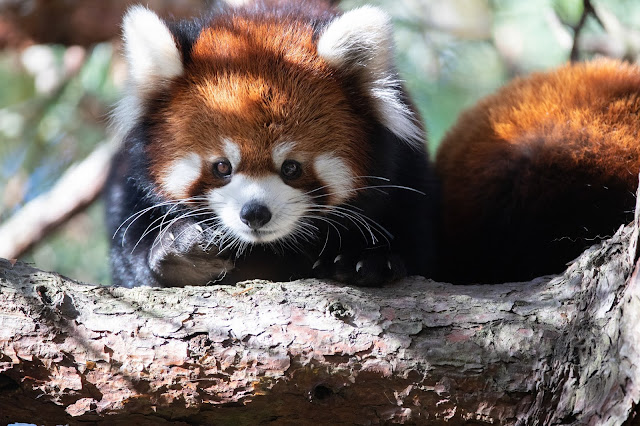 Thank you to her loving animal keepers for taking part in this red panda Q and A, for treating Hazel and cubs to the best good luck celebration ever and for their wonderful dedication to Hazel while she was in our care.

Watch: Red pandas explore their exhibit and hang with our photographer. https://youtu.be/nN2FX7BAOIw
As part of her virtual good luck party, we threw Hazel a red panda celebration! She was joined by growing cubs Tián and Zan for a morning feast of fruit, biscuits and time with her dedicated keepers. We’d love to add your favorite memories of Hazel and share them with her keepers, so please leave a comment, photo or stop by to wish her well before she leaves for her new home at Memphis Zoo at the end of the month.

Julie said…
I love how Hazel does a circuit around the exhibit when she thinks it is time for the bamboo to be delivered in the late morning or early afternoon. If she passes one of the cubs she always noses them in passing.
March 10, 2021 at 2:40 PM