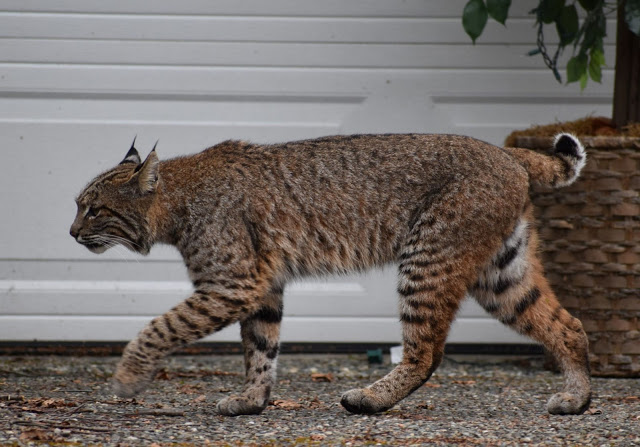 It’s been a year of carnivore spotting—thank you for joining us in learning about our urban carnivores, such as coyotes, raccoons, bobcats and black bears!
From Carnivore Spotter’s launch in mid-August 2019 to mid-July 2020, a total of 4,217 reports were submitted. The number of reports submitted per month was highest in the first few months following the launch of Carnivore Spotter, settling out to an average of 175 reports per month from November 2019 – July 2020 (with a bump of 256 reports submitted in May 2020). Reports came in from across Washington, but the majority came from Seattle. Within Seattle, most reports were submitted from north Seattle, primarily in the Ravenna, Wedgwood, Maple Leaf, Phinney Ridge, and Green Lake neighborhoods.

Coyotes have been the most reported species, making up nearly 50% of all reports. Raccoons were also frequently reported (20% of all reports), followed by bobcats (11%), black bears (9%), river otters (5%), opossums (3%), cougars (2%) and red foxes (1%; none of the red fox reports included photos or video, so project staff are not able to confirm these identifications). Of the total reports submitted, 20% did include photos or video, allowing project staff to verify the identifications. The verified reports match the overall trend of species reported.
Please note that these results do not represent the populations of these carnivores, but only suggest that these carnivores are present, observed and reported by people who are aware of the Carnivore Spotter tool. Of all reports submitted, 12% included interactions that occurred between the animal and people or human-made objects (such as trash cans or bird feeders). Below are a few highlights from submitted reports, along with some tips on coexisting with our urban carnivores so that we all can survive and thrive in the Pacific Northwest!
This bobcat was recorded by a remote camera taking a drink from a backyard fountain in Woodinville! Bobcats tend to be more common at the edges of urban environments – on Carnivore Spotter you can see that bobcat sightings are more common in the east parts of King County than in the more urban parts of the county. While visiting your fountain for a drink may not bother you, if you keep chickens, be sure to enclose chicken coops with electric or chain link fencing to help keep them safe and to encourage bobcats to look for more natural sources of food.
Watch: https://youtu.be/CJbDhCxmUYc
Just like this opossum in north Seattle, raccoons, coyotes and black bears can be attracted to pet food. To avoid conflicts with carnivores, feed pets inside and do not leave pet, livestock or chicken feed outside.
Watch: https://youtu.be/7nQLZegMViA
This Seattle dog, walking on a leash with their human, encountered a coyote in a city park, before they each went their own ways. Off-leash pets outdoors may get into conflicts with coyotes, cougars or other carnivores. Keep your pets inside from dusk until dawn and on a leash when you’re out and about to prevent encounters. 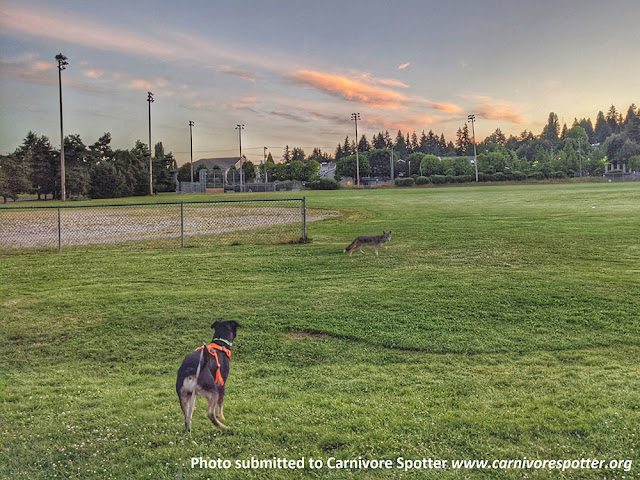 Even in urban places, keep an eye out for wildlife crossing the road while you’re driving. Fortunately, this otter family in West Seattle made sure to use the crosswalk!
Watch: https://youtu.be/40vxi4k-I9c
This momma black bear brought her cubs to check out a waste can in Sammamish. Your garbage can be attractive to bears, raccoons, and coyotes. To avoid conflicts with these animals, store garbage indoors when possible and place bins outside on the morning of pick-up rather than the night before.
Watch: https://youtu.be/u9T2GlyFY74
These tips for coexistence were developed in collaboration with the Carnivore Coexistence Action Team, a group of Issaquah neighbors who are working with Woodland Park Zoo through the Coexisting with Carnivores program to help foster coexistence between people and wildlife in our communities. Thank you for your reports to Carnivore Spotter—and keep them coming! As we continue to learn about the carnivores near us and the interactions that occur, we can increase our understanding of how best to coexist.
Thank you so much to University of Washington Doris Duke Conservation Scholars, Jackelyn Garcia and Brittany Amaral, who helped us to summarize the Carnivores Spotter observations received from the launch through July 2020!
Read on: Paula MacKay‘s new article Urban Dwellers, explores the Seattle Urban Carnivore Project—its origins, objectives, and how it is working with human communities to enhance coexistence with wildlife. Thanks to Wild Hope for sharing this wonderful article that features the work of our very own Katie Remine and Robert Long: https://www.zoo.org/document.doc?id=2779 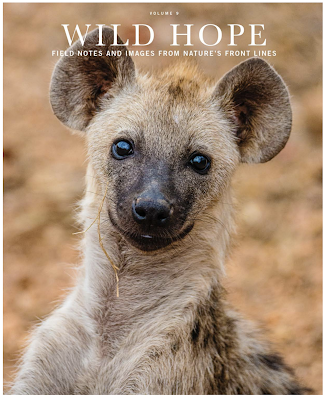 Bernard Ryan said…
‼️US government are giving out Financial Benefits (Financial Support) of up too $10,000 and above to citizens and not everyone is aware about this, though not everybody is qualified but how will you know if you qualified without checking.

Contact an agent for a quick check to know if you qualified for any benefits-:
sutton.aaron90@gmail.com