Tiny Egyptian tortoises teach us a big lesson in hope

Every now and then, the world’s tiniest creatures show they have something big to teach us, if we’re willing to listen. Such is the case for the Egyptian tortoise. This critically endangered species, one of the world’s smallest tortoises, faces intense pressure in the wild. They’re native to the desert bordering the Mediterranean Sea and were once found in Libya, Egypt and Israel. Now, they’re isolated to small patches of territory in Libya and are considered extinct in the rest of their territory. Habitat destruction and human encroachment, including the illegal pet trade, are to blame. But there is hope, in the form of tiny hatchlings that weigh about as much as a couple nickels. 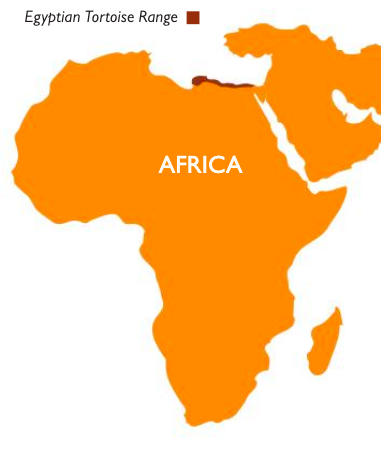 Woodland Park Zoo is proud to be a leader in the successful breeding and rearing of Egyptian tortoises. We work under the direction of the Species Survival Plan (known as the SSP)—a cooperative conservation breeding program overseen by the Association of Zoos & Aquariums to help ensure healthy, self-sustaining populations in North America. More than 90 of these tiny treasures have successfully hatched at our zoo since the very first one emerged from its shell here in 2004.

Unlike many turtles and tortoises, which are various shades of green, the Egyptian tortoise has a sand or brownish- colored shell. It’s a great adaptation to help them blend in with their native desert habitat. When they hatch, these babies are tiny, weighing only 10 grams. That’s not even half an ounce! Even full grown, Egyptian tortoises are small, with adults rarely getting more than 4 to 4.5 inches long from the front edge of the shell to the back—and the females tend to be bigger than the males.

Not much is known about the diet of the few individuals left in the wild, but here at Woodland Park Zoo our tortoises— we currently have 21 in our care, ranging in age from a few months to 47 years old—feast on a healthy, custom-made salad that includes nutritious ingredients like romaine, kale, celery, carrots and yam.
Our Egyptian tortoises live in several areas around the zoo, including the Adaptations Building on the zoo’s east side. If you’re visiting, you can find one group of them there living side-by-side with some lizards. Another group is part of our Ambassador Animals team. That means they take part in educational programs, helping guests to learn about them and promoting ways to take action for wildlife. Tut and Ramses (both 13 years old) along with Nile and Cairo (both 6) all hatched here as part of the SSP and are all part of the Ambassador Animals team.

Tortoises (and turtles in general) are often thought of as slow, passive or lethargic. Apparently, no one told that to our Ambassador group! These bachelors (they’re all male) love to zoom around—and they come running when we give them their favorite in-between meals snack: hibiscus flowers! YUM! All of these boys share a warm behind-the-scenes habitat, where they get along really well. Each of their shells has a slightly different pattern, so our animal keepers can tell them apart, but they also have tiny markers on their shells— small dots with numbers—so that team members can easily identify and care for each one.
https://www.youtube.com/watch?v=QQBRWL-ZYNs

In order to assure a safe and healthy experience, many of our in-person programs, including those with ambassador animals, are temporarily on hold right now—but that doesn’t mean you can’t meet our ambassador tortoises! Woodland Park Zoo’s new Wild Meet and Greet program allows you and a small group of family or friends are invited to have an up close experience with one of our extraordinary animals.
Today, more than 50 percent of the world’s known tortoise and turtle species are facing extinction, making these reptiles one of the most endangered animals on the planet. Woodland Park Zoo is more committed than ever to protecting all these species, around the world and here at home—and we invite you to join us!
Here are some ways you can help protect turtles and tortoises:
Come visit the tortoises and all of our animals! Woodland Park Zoo is open and we'd love to see you. Please go to zoo.org/visit to purchase timed entry tickets.
To view this article via our digital magazine and read more stories about wildlife, check out the Fall 2020 MyZoo magazine on Issuu!