This turtle-y awesome class of 2020 gets a head start on life! 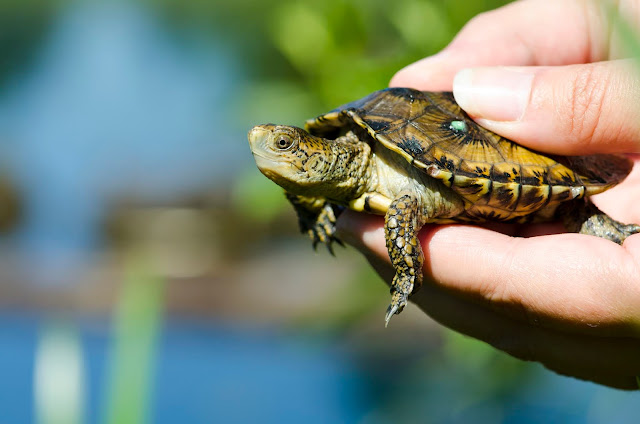 Washington state’s population of endangered western pond turtles will be bolstered when Washington Department of Fish and Wildlife (WDFW) and Woodland Park Zoo release close to 29 turtles next month to the wild at local protected sites.

The turtles are a part of the collaborative Western Pond Turtle Recovery Project, a head start program initiated in 1991. It is Washington state’s longest-running species reintroduction project.

Each spring, WDFW biologists go in the field to attach transmitters to adult female western pond turtles and monitor them every few hours during the nesting season to locate nesting sites; the nests are protected from predators with wire exclosure cages. A portion of the eggs are collected in late summer and the hatchlings are given a head start on life under the care of Woodland Park Zoo and Oregon Zoo where they can grow in safety. The head start improves their chance of survival in the wild.

“Due to the fact that wild turtles don’t feed in the winter, they become active in the ponds at a very small size and are easily predated on. Head-started turtles are fed all year and so when released, are less likely to be predated on just because of their larger size,” says Kevin Murphy, an animal curator at Woodland Park Zoo. “Once the turtles reach a suitable size to escape the mouths of invasive predatory bullfrogs, about 2 ounces, we return them to protected sites in their natural range where they’re monitored by biologists.”

Before the turtles are released each summer, zoo staff and WDFW prepare each turtle by weighing, measuring and marking for identification.

The western pond turtle ranges from the Puget Sound area of Washington through western Oregon and California to Baja California. By 1990, its numbers plummeted to only about 150 in two populations in the state of Washington, and the species nearly became extinct. These last remaining individuals struggled for survival as they battled predation by the non-native bullfrog, disease and habitat loss. A respiratory disease threatened the remaining turtles and biologists could not find evidence confirming hatchling survival.

In 1993, the state listed the western pond turtle as endangered. In 1999, Oregon Zoo joined the recovery team and, over the years, other nonprofits, government agencies and private partners have contributed to the multi-institutional conservation project.

Collaborative recovery efforts over the last 29 years have resulted in more than 2,300 turtles being head started and self-sustaining populations being re-established in two regions of the state: Puget Sound and the Columbia River Gorge. Surveys indicate that 800 to 1,000 of the released turtles have survived and continue to thrive at six sites.

“Woodland Park Zoo and other partners have been essential in the key stage of raising the turtles and helping to bring this species back from the brink,” says Hannah Anderson, WDFW Diversity Division Manager. “With invasive species, low reproductive rates, and real challenges from habitat loss and disease, it is good to know caring organizations like Woodland Park Zoo are working alongside us through their head start program to bring this once prevalent species back to Puget Sound and other areas around Washington.”

Learn more about the Western Pond Turtle Recovery Project and how you can help these PNW gems. Over the last several years, an emerging shell disease affecting more than 80 percent of the wild population threatens decades of recovery progress. Known to cause lesions in a turtle’s shell, severe cases can lead to lowered fitness and even death. Chicago’s Shedd Aquarium and the University of Illinois at Urbana-Champaign have joined the recovery efforts by looking at the disease from a microbial and pathological perspective to better understand its origin and the role environmental factors could play. The goal is to give young turtles a better chance at survival in the wild.

Woodland Park Zoo and Oregon Zoo are working with WDFW and other partners to address this urgent situation: studying the disease, treating severely diseased turtles, and providing overwinter care for turtles to allow their shells to heal before they are released back into the wild. After the treated turtles are released, WDFW monitors the turtles to determine if they remain healthy and are able to reproduce normally in the wild.

Learn more about other species recovery and human-wildlife coexistence efforts through Living Northwest, a Signature Program of Woodland Park Zoo.