Woodland Park Zoo is pleased to announce that its 3-month-old male gorilla, Kitoko, is recovering and doing well. The baby western lowland gorilla sustained head injuries over Memorial Day weekend during a skirmish among his six-member family group. 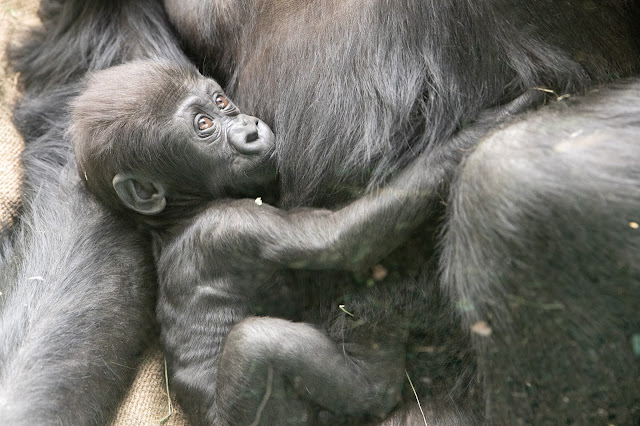 The infant sustained serious injuries to the head including a laceration from a bite wound, resulting in a bone fracture to the skull. Zoo animal health staff had to immobilize Uzumma, the mother of Kitoko, in order to separate the baby and take him to the zoo’s veterinary hospital.

A team of pediatric neurosurgery consultants from Seattle Children’s Hospital joined the zoo’s animal health team for evaluation, to conduct the surgical exploration and to close the wound.

To minimize the risk of infection, the baby had to spend a night at the zoo’s hospital for intravenous antibiotics and pain medications. He was reunited with his mom the next day and has remained under close observation.

The past couple of weeks were most critical for the infant gorilla. “Kitoko’s long-term overall prognosis is good and a favorable outcome is expected if we can continue to manage the risk of any repeat injury to the head,” says Dr. Darin Collins, director of animal health. “He appears to have no neurological or infection concerns at this time, based upon our visual exams and reports from the gorilla keepers on his activity and appetite. Visual exams are ongoing and we continue to update the consultants from Seattle Children’s Hospital.” 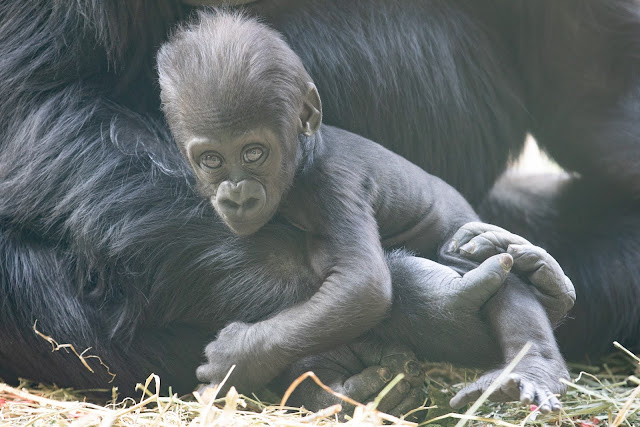 According to Martin Ramirez, mammal curator, Kitoko is healing well, nursing, playing and behaving normally. “Our gorilla team has been keeping Kitoko under close watch and is seeing all the behaviors they would expect from a healthy 3 month old gorilla. He’s even grabbing and mouthing food that his mom is eating,” says Ramirez. The gorilla keepers are focused on training mom Uzumma to present Kitoko to them while training Kitoko to voluntarily receive medicine. “He’s learning quickly and enjoys a little agave or diluted pear juice when taking medicine.”

Kitoko and Uzumma live with four other gorillas: Kitoko’s dad, Kwame; female Nadiri and her daughter, Yola; and a female adult, Akenji. The gorilla keepers didn’t witness the altercation among the gorillas, but cam footage shows it occurred in the morning in the sleeping den.

Since the skirmish, Kitoko, Uzumma, and Yola have been living apart from the other adult females in their group, with Kwame being rotated daily between the two groups.


“It’s important to maintain stability and normalcy among gorilla family groups. We want to get this family back together as soon as it is safe to do so,” says Ramirez. “We’re exploring different options, consulting with colleagues within our accrediting network and letting the animals take the lead in showing us what they need socially.”

Ramirez adds that gorillas tend to be gentle giants but conflicts among family members do occur, in zoos and in nature. “Conflicts can involve biting and shoving among individuals. We suspect one of the adult females inadvertently bit the baby while engaged in a skirmish with his mom,” says Ramirez.

We are so thankful for the community's support and loving messages for Kitoko and his keepers. We will keep you updated on his milestones at zoo.org/growingupgorilla. There is still time to wish Kitoko well by signing his wish book: https://www.zoo.org/growingupgorilla. The deadline to submit your wish as part of the coloring contest ends on June 12.


We thank our veterinary and animal health team, our dedicated keepers and the wonderful folks from Seattle Children's Hospital for all their care and attention.

Anonymous said…
That's great news! Congratulations to the WPZ staff and Seattle Children's Hospital. Thank you for the update.
June 9, 2020 at 12:58 PM

Clare Hodgson Meeker said…
So glad to hear that Kitoko is recovering well. Kudos to the doctors, keepers, and veterinary staff for their expertise and dedication to caring for Kitoko and Yola's gorilla family.
June 10, 2020 at 7:00 PM