Zoomazium to You: Aunts and Uncles and Grandparents, Oh, My!

Among the things our early learners are missing (for now) is close contact with their extended families. There’s nothing like a storybook read by Granddad or an outing with their coolest Auntie to make a youngster’s day special! 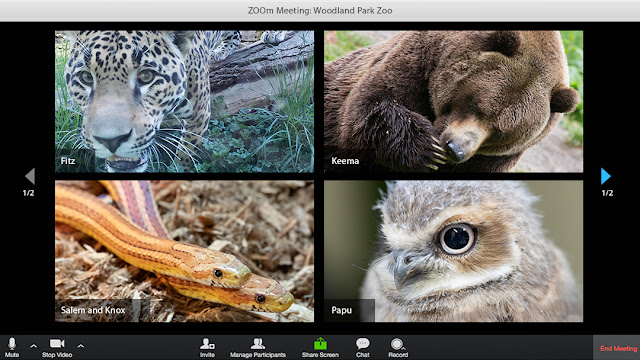 Our gorillas are a great example of the importance of extended family in the lives of little ones. New mom Uzumma is doing an incredible job with her newborn son, and that’s certainly thanks in part to the attentive care she had throughout her early life from her mother, Amanda. And when that little one gets a little older, he and his mom will have plenty of support from their extended, blended family—and will likely be providing support themselves!

Uzumma’s example of excellent infant care will benefit four-year-old Yola as she grows up. Her own mother, Nadiri, didn’t know what to do when Yola was first born, having been keeper-reared as a newborn due to her own mother’s difficulties. But Nadiri did have a great example when she was a little older. Once she no longer needed to nurse, she was adopted by our gorilla super-mom Nina, whose loving example certainly helped Nadiri learn to care for Yola with some keeper assistance. Although Nina passed away in May of 2015, at the very advanced age of 47, she lives on through the care and love she gave to generations of gorilla moms.

As Mother’s Day approaches, we all want to keep those intergenerational connections strong, despite being unable to directly visit our extended families. So this week, Zoomazium’s Emily Felty collaborated with Hannah Heublein from our Youth and Adult Engagement team to offer an activity for grandparents, aunts and uncles, or any other far-away loved ones to enjoy with their favorite early learners—a version of the classic game of I-spy!

What you need: A virtual video connection to a loved one (such as FaceTime, Skype, Zoom, etc.)
Time: However much you have!
Age Range: Variations below for pre-verbal babies and toddlers, and for verbal preschoolers all the way up to youth.
School Connections: Early language development, observational skills

For babies and toddlers: The goal of this activity is to promote joint attention, which is when two people focus their interest on the same object. It’s an important stepping stone to language development, and a key early social skill. The grownup at home with the baby can set up a few toys or other potentially interesting objects between the baby and the computer monitor with the faraway grownup. The faraway grownup should watch the baby, and be alert to what object they look at first. When baby shows interest in an object, faraway grownup narrates, such as by saying, “you’re looking at the yellow block,” or, “you’re touching the stuffed dog’s tail.” The grownup at home can help by pointing to or picking up the object of interest, but it’s important for the grownups to follow the baby’s lead. Direct your interest to the baby’s interests, rather than trying to encourage the baby to be interested in the item of the adult’s choice. Narrating play can feel awkward at first, but keep at it and it will get easier—if you feel like you’re auditioning for the role of Captain Obvious, you’re doing a great job!

For older children: Both the child and faraway grownup should each pick any background in or around their home to stand in front of. Anywhere will work, as long as there are a variety of objects to look at—perhaps the child’s bedroom, an overflowing closet, or your favorite spot in the yard. The adult can begin by selecting an object in the child’s background. Say, “I Spy with my little eye....” finishing with a clue about the object. Use colors, textures, sizes, or even funny words as your clue. When your child correctly guesses the object, switch places and have them try spying something in your background! Throughout the game, switch between picking one specific object and choosing a category, then spying everything that fits inside it.

For Youth and Multiple Households at the Same Time: Have each person pick a nature picture, maybe one they took themselves, or one of the many fun pictures from the zoo. Play I-Spy and sharpen everyone’s attention!

Bonus, if you have this option: If the faraway grownup can speak a language not spoken in the early learner’s home, games like this one over virtual connections are a great opportunity to use that language!

For previous week's Zoomazium To You activities, click the links below:

Have you and your family tried any of our Zoomazium to You activities yet? If so, we'd love to hear how it went! Tag us @WoodlandParkZoo and use #ZoomaziumtoYou to share photos, stories or videos of your own Creature Feature session