At Woodland Park Zoo, we want to inspire people of all ages to make conservation a priority in their lives. Taj and Glenn want that, too! In case you haven’t met them yet, Taj and Glenn are the greater one-horned rhinos who moved into the zoo’s new Assam Rhino Reserve earlier this year, and they are already inspiring the next generation of wildlife protectors. That generation includes lots of motivated kids of all ages who are active in their communities and schools. They want to save wildlife. They want to make a difference. And we want you to know about them!


We recently shared a story with you about children who live in the Manas community of Assam, India. They take an oath every day at school with their fellow classmates to protect the wildlife and wild places near where they live. It just so happens that where they live is right next to Manas National Park—home to animals found nowhere else on earth including pygmy hogs, golden langurs and a translocated population of greater one-horned rhinos—just like Taj and Glenn. These kids feel it is their duty to look out for wildlife and to look out for rhinos.

Halfway around the world, there are groups of kids right here in the Seattle area who feel the same way. Each of these groups is taking action to make sure that THEIR future includes a world where rhinos can live safely without the threat of poaching. These junior philanthropists are showing us that you’re never too young to make a difference. We are inspired by them, and we think you will be too! They come from a variety of different neighborhoods and schools, but they all had the same great idea on how to raise funds for conservation and raise awareness about the plight of rhinos—set up lemonade stands in their neighborhoods! 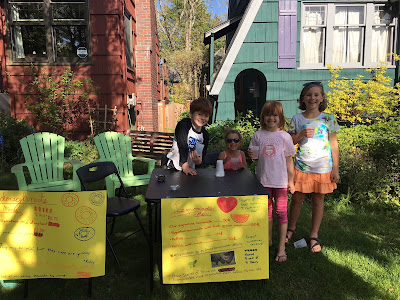 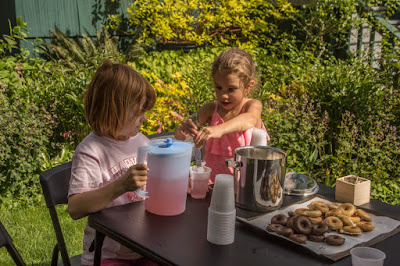 Finley Ross, Evelyn Ross, Elise Torpey and Brooke Torpey ran a lemonade and donut stand in their north Seattle neighborhood. They raised money to help save rhinos and to raise awareness about some of the illegal poaching activities that threaten them. Finley, age 10, knows that rhinos need to be protected. “People are killing them and illegally selling their horns to other countries,” he said. “Some people think the stuff in the horns can be used for medicine and that's not true.”

Max and Leo Chandrasekaran, along with some friends, also ran a lemonade stand and sold cookies. They set up shop next to a baseball field in the Queen Anne neighborhood and decided they wanted all the money they made to go toward rhino conservation. Way to go kids!


Take a look at this class of second and third graders from Laurelhurst Elementary School who hosted a lemonade and cookie stand in support of rhinos as part of their community impact project. Here they are, pictured at Woodland Park Zoo’s rhino exhibit in the Assam Rhino Reserve, presenting a check to Chad, one of our rhino keepers. Chad looks pretty impressed! We’re impressed too!


Finally, a local Girls on the Run Team from McDonald International Elementary school decided that a lemonade and cookie stand was the perfect way to raise money in support of endangered animals, like rhinos. Here they are, coming out for a cause and having fun at their elementary school.

In total, these kids—these budding philanthropists and conservationists—raised more than $800 for rhino conservation. That’s enough to outfit an anti-poaching ranger station with equipment and gear. Clearly, a little lemonade and a lot of passion for conservation (plus some cookies, too) go a long way! Now THAT is impressive and we are grateful for the example they’re setting for our whole community.

In the Rhino Lookout series, we’re highlighting the stories of those who are looking out for rhinos and what we can do to help. Visit Assam Rhino Reserve, now open at Woodland Park Zoo, and follow #rhinolookout for more stories. Every visit to Woodland Park Zoo supports our work with International Rhino Foundation and more than 30 other projects dedicated to saving species here and around the world.

Rhino Lookout: Do more than see rhinos. Look out for them.