When Washington Department of Fish and Wildlife Detective Lauren Wendt was searching for a new recruit, she had some criteria in mind: high energy, relentless drive, sharp senses, and a love of toys.

“We knew we wanted to rescue a dog,” says Detective Wendt, who took the initiative to start Washington’s first wildlife crime detection dog program. Wendt scoured the Internet looking for a good fit. That’s when she found a then 16-month-old black Labrador retriever who had too much energy for his family and needed to be re-homed.

“Some of these dogs that get labeled as bad dogs or just have too much energy, if you give them a job to do they are so much happier. That is exactly what happened with K9 Benny.” 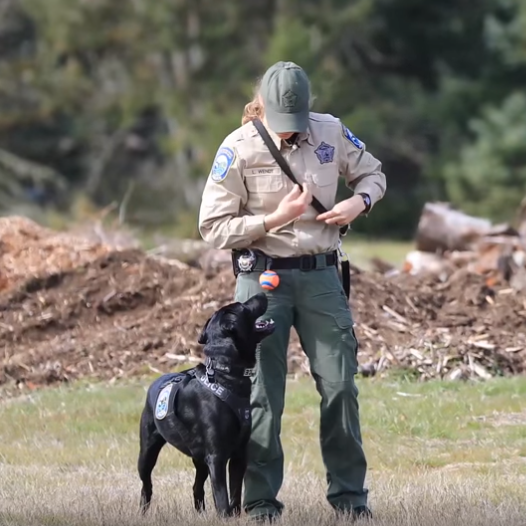 Sure, his paycheck is a rigorous round of tug-of-war with his favorite rope ball, but K9 Benny’s work is serious business. His nose can detect some of the most trafficked illegal wildlife parts—rhino horn, elephant ivory, bear gallbladder and shark fin—firearms, and spent casings.

Wildlife trafficking is a lucrative international crime with troubling local connections. A couple was busted with $25,000 valued in ivory at Seattle-Tacoma International Airport in May this year. That same month, authorities busted one of the largest poaching rings ever to target Washington’s wildlife.

To stop the killing, Woodland Park Zoo supports ranger patrols that protect greater one-horned rhinos, Malayan tigers and African elephants from poachers. But to truly end wildlife trafficking, we must also stop the demand and close the markets.

When 70% of Washington state voters passed the nation’s first citizen initiative to ban wildlife trafficking and assure better enforcement, one million people in our community came together to make it clear—we stand for saving species. So does K9 Benny, albeit on four legs.

Benny has put more than 200 hours of training into his work. It started with a simple approach. When Detective Wendt first introduced new scents to K9 Benny’s detection repertoire, she would pair a scent with a toy so that Benny associated those odors. Then she slowly began removing the toy and rewarding him after he found the scent.

Now that K9 Benny has more experience searching, Detective Wendt trains him on new scents by hiding a target odor in a small, wooden box. She then places that box alongside a row of identical boxes without the scent. When K9 Benny is asked to “find it,” he is rewarded with his favorite toy if he sniffs out the scented box. With repetition and variety, moving the box to different positions, it takes K9 Benny a few days of several 10-minute “find it” sessions to become a master sniffer. “He is trained to sit or lie down and stare at the item. That’s his way of letting me know he found it and the location of where it was found.” 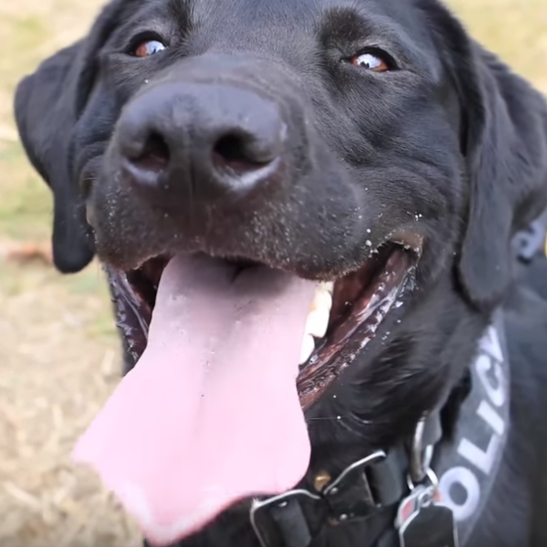 That nose—certified and reliable—is key to improving Washington’s enforcement. “A lot of these species are smuggled just like drugs, so a dog is a very effective and efficient way to detect these items. I can bring K9 Benny in and he could essentially search a whole cargo load in a tenth of the time it would take me and numerous other Fish and Wildlife Officers to do the same job.”

As efficient as he is, the task ahead of K9 Benny is enormous. In 2017, Washington ports received 1.3 million shipping containers, just one way for goods to come in and out of our state. “More dogs, in my opinion, are better than one. Hopefully down the road we can get more dogs like K9 Benny who are trained to detect the same things he is and we can expand to other species and maybe some more of our native wildlife that is also poached and trafficked,” adds Detective Wendt.

This good boy remains undaunted. At home with Wendt, he’s a couch-napping snuggler. “But the moment he sees me getting ready for work, he gets really amped up and is ready to hop in the truck.”

Action Alert: You Can Help Benny

Keep your eyes peeled for any signs of wildlife crime in Washington. From closed-season hunting, to rhino horn and elephant ivory in gift shops, your sightings can help Washington Department of Fish and Wildlife enforce law and stop poachers and traffickers.

PHONE
Add the state Fish and Wildlife tip line to your phone contacts so you are always ready to report what you see over the phone: 1-877-933-9847

TEXT
Text the tip line with photos, videos, or message by texting WDFWTIP and your report to TIP411 (847411)

In the Rhino Lookout series, we’re highlighting the stories of those who are looking out for rhinos and what we can do to help. Visit Assam Rhino Reserve, now open at Woodland Park Zoo, and follow #rhinolookout for more stories. Every visit to Woodland Park Zoo supports our work with the International Rhino Foundation and more than 30 other projects dedicated to saving species here and around the world.

Rhino Lookout: Do more than see rhinos. Look out for them.