Earlier this summer, in celebration of the opening of Assam Rhino Reserve, we asked artists of all ages to show us their vision of a healthy future for greater one-horned rhinos with the Rhino Lookout coloring contest.

Over 350 amazing entries rolled in, and we realized that picking the winners would be very tough. Here are the very creative and inspiring winners... 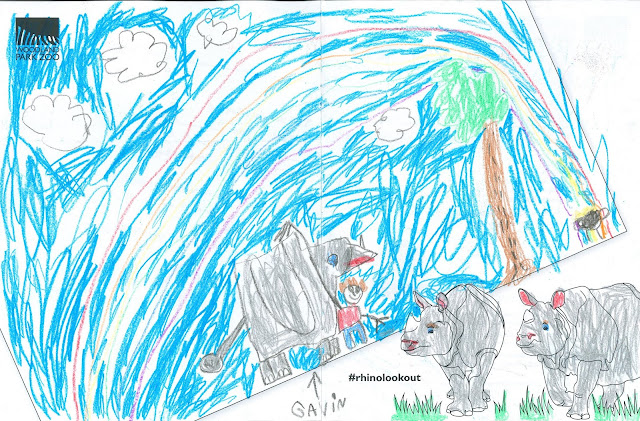 "They are living creatures and they are alive. And you need to save them when they’re in trouble. If you’re there, try to stop the bad guy."

We couldn't agree more, Gavin, and we loved your optimistic pot of gold representing a healthy future for rhinos. Wonderful drawing! Gavin will receive a ZooParent rhino adoption package and certificate for an up-close rhino experience. 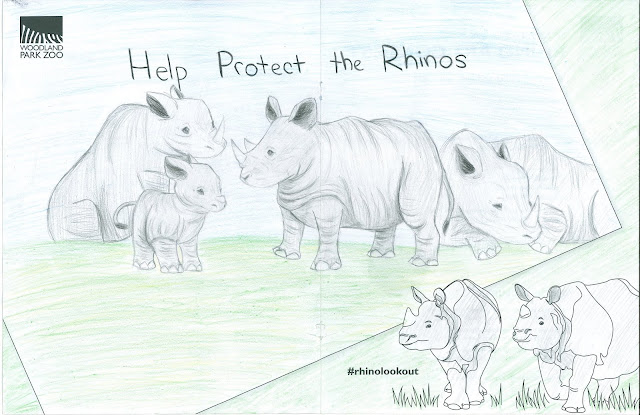 "It is important to protect them from poachers, habitat loss, and other threats. Rhinos are critically endangered. If rhinos go extinct, the survival of other animals would have a deep impact. Also the ecosystem would be unbalanced. The area would be less grazable. We need to protect the rhinos."

We're not sure we've ever seen a more adorable rhino crash (group). Beautiful drawing, Ally, and you are right, without rhinos the world would be a very unbalanced place. Ally will be invited to a keeper tour and up close experience with greater one-horned rhinos Taj and Glenn. 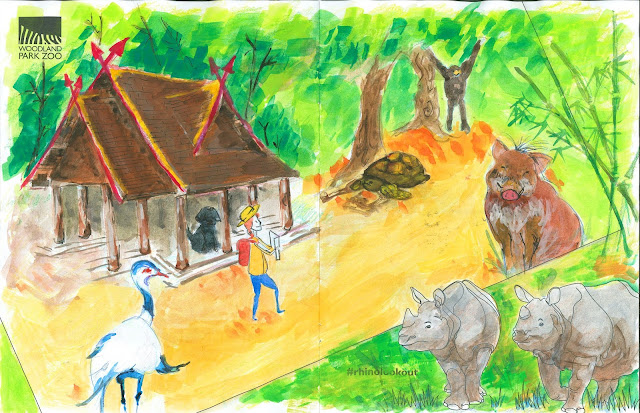 "The critically endangered status of these animals are caused by our past ignorance. To me, being able to protect rhinos, their habitat, and the entire ecosystem of wildlife they are a part of, is an indication that humanity is capable of learning from our mistakes. To make mistakes is human, but what matters is how we respond to them. I want us to respond to this with the utmost urgency and dedication to prove our humanity."

Wow, first of all, beautifully said. Jiali, we were blown away with your painting of rhino habitat and Assam Rhino Reserve. What a creative interpretation, and so inspiring! Jiali will be invited to a keeper tour and up close experience with greater one-horned rhinos Taj and Glenn. 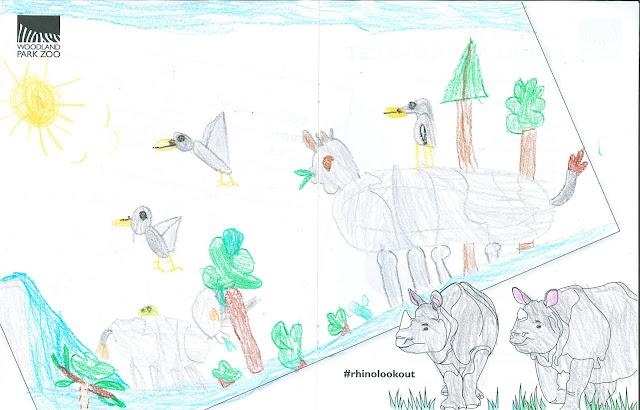 Kamden Raab (6)
"Rhinos are an endangered species. Without rhinos other animals will be effected in their ecosystem." 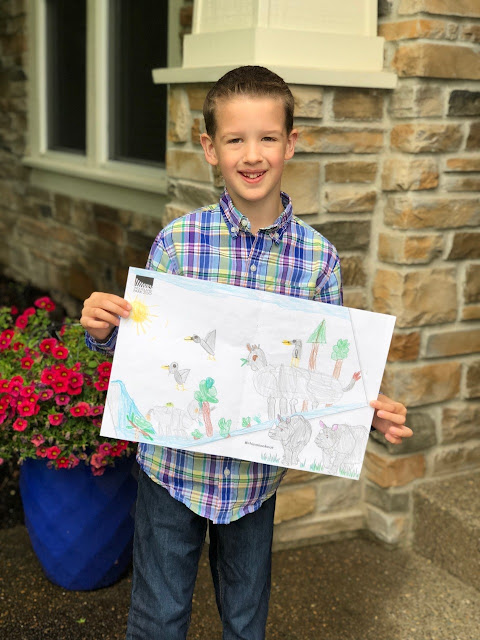 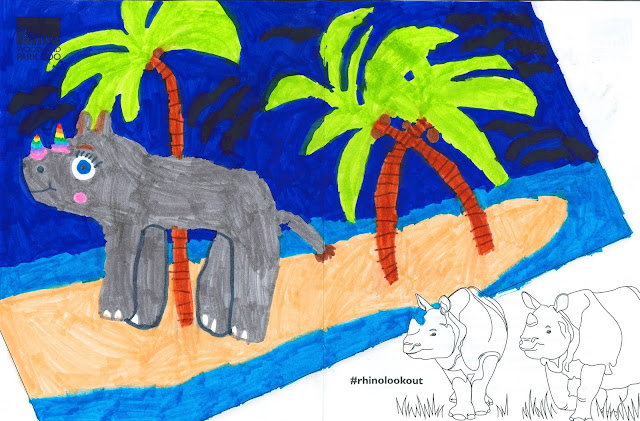 Eloise Greely (5)
"I want them to do cool things like rainbow horns and live on the beach in the future." 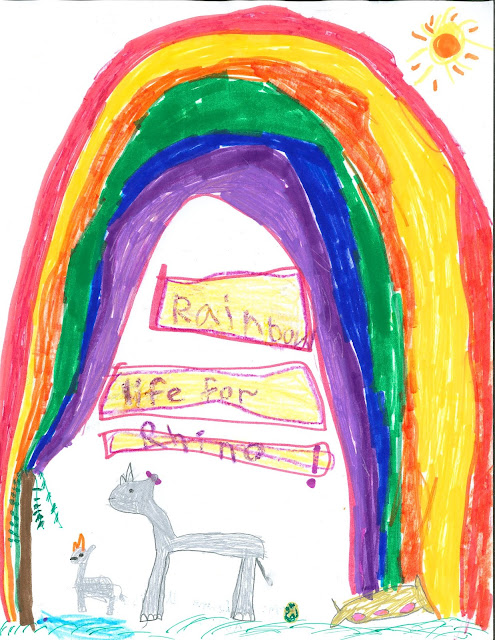 Katherine Usoltsev (6)
"Rhinos are in danger. People are killing them because of their horns. They are using the horns as a medicine or as a trophy. One way to protect rhinos is to cut the horn. I want to save rhinos because they are smart and part of our rainbow planet Earth!" 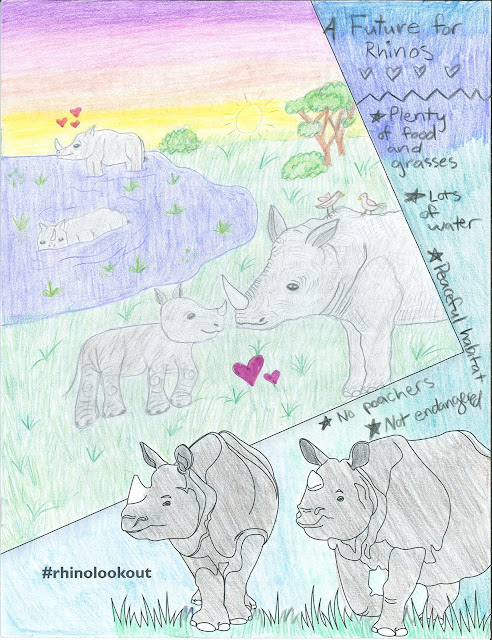 Camryn Morris (12)
"They are incredible animals. There’s no other animal like a rhino. I know that tons of people care about rhinos, but some hurt or kill the rhinos. We must stop that now because they don’t deserve it. I hope someday I can raise a lot of money to donate to protecting endangered species." 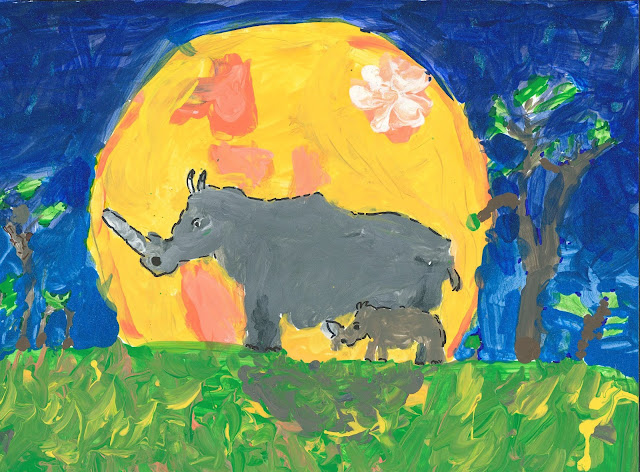 Michael Usoltsev (10)
"It is important to save rhinos because rhinos are almost extinct. Rhinos are special because they are relatives of mammoths (one interesting theory). Rhinos are basically mammoths that evolved to one horned mammoths then to one horned rhinos. It is important to save them from extinction (we may be saving mammoths!) It is also important for me because rhinos are part of our beautiful planet. I want my kids and grandkids and other generations to enjoy this amazing animals forever. I love coming to Woodland Park Zoo to see these smart animals. I hope one day in my life I will know their population is not in danger anymore. The planet Earth without the rhinos will never be the same." 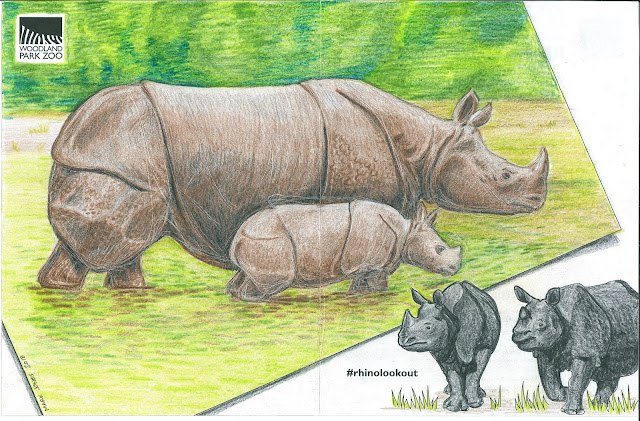 Mark Jones
"I love rhinos! These majestic, beautiful animals have been around for eons, and they deserve our help so they will be around for many, many more years. Looking forward to seeing the rhinos at the zoo!"

"Many animals, including rhinos, help shape our ecosystems. Without rhinos, the world might look extremely different. Rhinos graze on grasses, and that carves paths for other animals. Each animal is like an essential piece to an enormous puzzle. Without one piece, the puzzle is unbalanced and incomplete."

All of our Runners Up will receive a rhino-themed prize from our ZooStore.

Thank you to all of the incredible artists who participated in our Rhino Lookout contest. Your optimism and hope for this species matches your talent and creativity—the world is a better place with your artwork and sentiments in it.