A pair of crested screamer birds hatched in early March.

A pair of crested screamer birds, both females, hatched in early March. The chicks represent the first offspring between the 15-year-old mother and 23-year-old father. The last successful hatching of this species at the zoo was in 2002.

The little chicks are busy stretching their long legs, soaking up the spring sunshine and eating lots of broccoli florets, among other snacks such as a blend of game bird, romaine lettuce and waterfowl pellets.

The crested screamer family is currently off public view to allow animal keepers to monitor the chicks closely and weigh them regularly to ensure acceptable weight gains. At 2 weeks old, the chicks are fluffy and downy and currently weigh 6 ounces. “So far, we’re pleased to report the chicks are experiencing good weight gains,” said Mark Myers, bird curator at Woodland Park Zoo. “They’re eating well and the parents are very attentive. The chicks need lots of food and exercise to grow. Based on how they’re doing, we’re optimistic they’ll continue to thrive under the care of their parents and our animal care staff.” 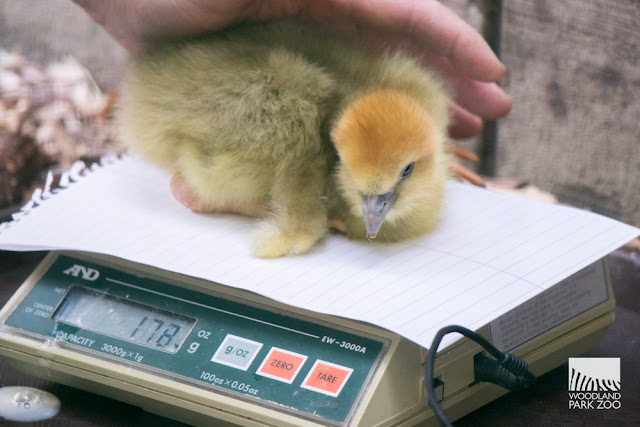 Screamers are aptly named for their loud, distinguished call, making them among the loudest of any bird. Native to Bolivia and southern Brazil to northern Argentina, these large goose-like birds are common in tropical and subtropical wetlands, including marshes, estuaries and lowland lakes. Another distinctive feature is a large, sharp spur on each wing which the birds use to defend themselves against predators. Screamers form monogamous relationships and both adults take part in incubation and caring for the chicks. Although the crested screamer population is not threatened in their home range, screamers and many other species of waterfowl are threatened by habitat loss due to human-imposed activities.

The adults were paired under the Crested Screamer Species Survival Plan, a conservation program coordinated through the Association of Zoos & Aquariums to help ensure a healthy, self-sustaining population in zoos.

The crested screamers live in the Temperate Forest, right next to the flamingos. The chicks will remain behind the scenes until they are a little bigger and ready to join their parents in the yard.