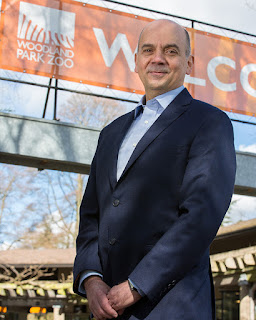 Alejandro Grajal, PhD, our new president and CEO, has a big goal: to make conservation for everybody. He’s convinced that Woodland Park Zoo is the best place to achieve it.

Alejandro is an internationally recognized voice for the power of modern zoos. He believes they are essential to help humans embrace their biggest challenge to date: developing a new relationship with nature and all beings with whom we share the planet. To the challenge he brings deep and global expertise in conservation science, environmental education, and animal welfare advocacy.

In this interview with Alejandro, we explore what brought him to the Great Pacific Northwest—via Venezuela, Florida, New York and Chicago—and his vision for Woodland Park Zoo.


You began your career as a biologist in the field. How did your trajectory turn to leadership roles in zoos?

I’m a water man—I love anything in the water. I graduated with a degree in marine ecology, working on coral reefs. You know, I thought I was going to be the next Jacques Cousteau! But he already had his job, so I went to work at a research station in the Llanos of Venezuela where I worked with the Smithsonian Institution.

It was a time of huge effervescence in the field of conservation biology, especially conservation and development. That was my emphasis at the University of Florida where I did my doctorate. I realized a hybrid role—research and applying knowledge in the real world—was what I really wanted to do. Fortunately, straight of out graduate school I was hired by the Wildlife Conservation Society in New York as the director of Latin American and Caribbean programs and I dove into a zoo career.

What has working in zoos taught you?

It has taught me that if you really want to change society’s opinions and behaviors—how we treat the planet, how we treat other species, and even how treat other people, the latter being a question that is especially pressing on everyone's minds right now—you need to understand human motivation. We are all inextricably part of the same fabric of life. Conservation ultimately is about people and the choices we make. How do we get people excited about choices that heal instead of harm? So, I had to integrate the social science side of conservation with the biological side, and of course the organizational and policy sides.

After 25 years, I now see that my leadership role is more of an untier of knots. Maybe it doesn’t sound very sexy, but it’s exciting to me because possibilities are like puzzles, and I love solving puzzles.

You were most recently senior vice president for conservation, education and training at Chicago Zoological Society/Brookfield Zoo, one of the largest zoos in the U.S. What attracted you to Woodland Park Zoo and the Pacific Northwest?

I’ve been watching the evolution of zoos for a long time. Like many others, I’ve always admired WPZ’s reputation in the industry as a leader and innovator. It pushed us to design naturalistic landscapes for animals, to pay attention to social groupings, play, psychological health, and using research and science to drive innovation in animal well-being. Today good zoos take these things for granted, but WPZ began setting these standards decades ago.

Then there’s the attraction of the Pacific Northwest itself. There’s this mix of love of nature and conservation ethic, social and technological innovation, and people willing to invest in what they really care about. And right in the middle of it all is WPZ. We’ll find the best balance of high-tech and hands-on. We’ll turn 1.3 million visitors a year into social innovators and partners in real-time conservation. We’ll grow peoples’ capacity as agents of change. We’ll do it better with more diverse segments of our society involved, because only with multiple perspectives can we see clearly. All this can be leveraged to make conservation for everybody, to create a future where the interests of other species, even the tiniest ones, and the entire planet, truly matter. I’m on fire for that.

What excites you most as a zoo leader?

Zoos are powerful places and instruments for healing the planet, whether people come here to learn new things, or take direct action for a favorite species, or even just to experience the calming effect of nature and reconnect to what's positive during difficult times.

What really excites me on a day to day basis is: How do ordinary people engage in conservation? Why or why not? What information or experiences are the most effective motivators? These are important questions that social science is working on, and they’re crucial to the future of our planet.
And we at zoos are at the leading edge of this! The 180 million people a year that North American zoos attract are a fascinating universe of the how and why of conservation choices. Our research with these audiences has major implications for sharing the influences that work.

For example, we’ve learned that once we get beyond our reptilian brain—existing chiefly to reproduce, eat, be free from harm or pain—we then access the next layer, the biggest motivator of human behavior: our emotions. They drive our choices way more than rational information. Zoos have a special power because they foster emotional connections between people and animals and remove barriers to taking action.

What can be more exciting than that?