If you visited the zoo during July, you may have seen a group of enthusiastic, orange-t-shirt wearing learners writing in their nature journals at the maned wolves exhibit, designing a scavenger hunt along the Northern Trail, typing away on computers at the building across from Bug World, observing the birds in the Tropical Rain Forest Dome, or reading about animals as they snuggled up in the den on the Discovery Loop.


For five weeks this summer, twelve 6th and 7th grade students from Asa Mercer, Washington and Denny Middle Schools explored ecosystems, watersheds and science careers through the ZooCrew Summer Learning Program, Woodland Park Zoo’s middle school outreach program. The ZooCrew Summer Learning Program is a free program in which students participate in nature explorations and science investigations, meet and work with STEM professionals, produce and showcase their own film, participate in leadership and team building activities, and practice reading, writing, math and science. This summer, students not only explored and learned at the zoo, but also traveled all over western Washington exploring ecosystems!

We started the summer with an overnight trip to Camp Lyle McLeod on the Kitsap Peninsula. At Camp Lyle McLeod, we played team building games, swam in the lake, canoed and explored nature. We returned from camp ready to dive into an exploration of Washington’s ecosystems with a visit to the Cedar River Watershed Education Center, where we were treated to a behind-the-scenes tour of our local watershed.

In the second week of the program, the ZooCrew students were ready to apply their newfound knowledge about watersheds with a trip to Snoqualmie Pass and the Issaquah Salmon Hatchery where they learned about the top of the watershed. From biotic and abiotic components to producers, consumers, decomposers and more, they learned about the specific parts that make up an ecosystem. The students then started to make connections and learn how an ecosystem works. They also practiced their math and science skills with a water quality investigation to determine if Issaquah Creek was a good habitat for salmon (they found that it was: great news for the Issaquah Hatchery!).


We kicked off our third week learning about the middle of the watershed with an exciting and stinky visit to Brightwater, a wastewater treatment plant and education facility in Woodinville. At Brightwater, ZooCrew students donned safety vests and hardhats to explore what happens to water when it leaves our homes. We saw fertilizer being made, discussed careers in water management, and went on a wastewater scavenger hunt.


The students continued to explore how humans impact the watershed by learning about some of the Woodland Park Zoo’s local Living Northwest conservation projects. We met curator Jenny Pramuk and learned about the zoo’s Oregon spotted frog repopulation project, observed and learned about barn swallow research from lead keeper Gretchen Albrecht and volunteer Anna Martin, and got a peek into the ongoing amphibian monitoring work done by ZooCorps volunteers Sophie, Emily and Katherine. We even got to explore the mysterious world of animal tracking with a field trip to Chinook Bend Natural Area led by IT’s certified tracker (and long-time ZooCrew volunteer) Chris Kluener! It was an eventful week that taught the ZooCrew students not only about the important conservation work done here at the zoo and in the community, but also about the diversity of urban wildlife living in their parks and yards.


In our fourth week, we made our way to the bottom of the watershed with a behind-the-scenes visit to the Seattle Aquarium, a day of bird-watching and nature explorations at Nisqually National Wildlife Refuge, a salmon science investigation at the Ballard Locks fish ladder, and a day of tide pooling at Lincoln Park. Students got a chance to learn about marine wildlife, wetlands and estuaries. They also continued to practice writing and drawing in their nature journals and learned about how journaling is a tool that scientists use to make observations and record their findings.


Throughout the summer, students also had an opportunity to meet scientists, observe them at work, and ask questions about their career paths. These career expeditions were full of exciting hands-on experiences: making a cloud in a bottle with University of Washington climatologists, meeting an octopus and talking to veterinarians and marine biologists at the Seattle Aquarium, and experiencing a few of the many career opportunities in the zoo world from WPZ’s own ZooCorps summer interns. By the end of the summer, several students were talking about wanting to be zoologists, biologists and field conservationists when they grow up.

ZooCrew students also spent time throughout the summer filming and photographing their explorations, investigations and experiences. Part way through the summer, professional filmmaker Jonah Kozlowski visited the students at the zoo and led a workshop on filmmaking. In the fifth and final week of the program, the students took what they had learned from Jonah, sorted through hundreds of photos and video clips, recorded voice-overs, and put together a 25 minute film about their summer experience. Not only was the filmmaking project a great opportunity for the students to learn how to make a film, use technology, learn how to use the Movie Maker program and reflect on their summer experience, but it was also a chance for them to learn the importance of sharing their story, practice communication, and develop literacy skills.


In the final week, the students hosted ZooCrew’s Family Night. The students took their families and friends on a tour of the zoo and practiced public speaking as they presented their film.

In the final days of the program, the students took the ferry across Puget Sound and visited IslandWood to put their teamwork to the test and to reflect on their summer experience. It was evident that the students not only had fun in the program, but also learned a lot! Maya, a student from Asa Mercer Middle School, said “I got better at communicating with people.” Milo, a student from Denny Middle School, shared “I learned a lot of stuff, like how a watershed works. Next year, we have a huge test at school about the watershed and I feel strong about the topic now!” And Mahalia, from Washington Middle School, summed up the way many people involved in the summer felt when she said “I learned what an ecosystem is and what a watershed is. I got better at teamwork and being able to write more about things that I see. Overall I had a really fun time this summer and I want to come back next year!”

For the ZooCrew Summer Learning Program students, the learning and exploring is not over. All of the students are invited to participate in the ZooCrew afterschool program at their schools, which starts in the fall.


Thanks to all who helped make the ZooCrew Summer Learning Program a success! We are looking forward to the ZooCrew school year and future summers ahead! 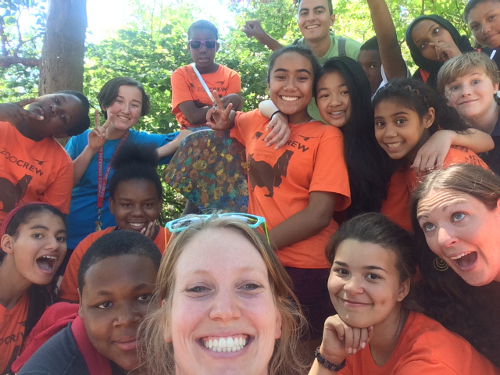