Last October 24, 2014, three little lion cubs were born to mom Adia and dad Xerxes. Since then, the cubs have stolen more than a few hearts as we've watched them grow into rough and tumble pre-teens.


At just two weeks old, the lion cubs were already curious enough to keep Adia busy in the den. Filling their bellies with milk and going on tiny scouting adventures was supplemented with lots and lots of cat naps.


At six weeks old, the cubs aced their veterinary exam with flying colors, proving to be feisty and strong and by 11 weeks old they were ready to explore the outdoor exhibit with mom and dad.

They went Beast Mode in January...

And later that month, Xerxes picked out names for his three sons (with just a little help from the community) and Gandia, Mandla and Tandie were official. We even had a few tricks for telling them apart.


Over the summer, the three little cublets have been playing, wrestling, eating (a lot) and having some major growth spurts! Right now, each cub weighs right around 150 lb. Their keepers say they love to eat anything and everything. They aren't picky.

The growing boys are getting stronger and stronger each day, but it is still easy to tell them apart from mom and dad. 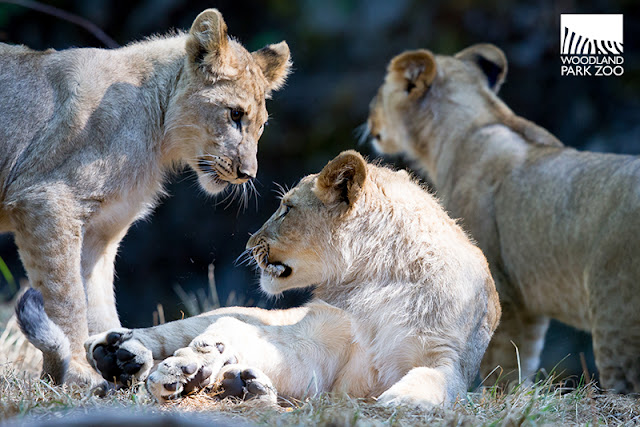 Mandla is a true momma's boy and loves to hang out with Adia.

Tandie loves to hang out with his dad, Xerxes, and is the most vocal of all the cubs.


All of the cubs get along with each other as well as Adia and Xerxes, so the family has been bonding together as a pride since January. This is Xerxes first litter of cubs.


The keepers use whisker patterns to tell the cubs apart, now that they are a bit older. This is similar to how researchers study big cats in the wild with camera trap images.


The cubs are still growing and in a few more months (at a year old) they will reach Adia's shoulder height. With cooler temperatures rolling in this month, be sure to stop by the lion exhibit to see the three brothers frolicking in the fall leaves and taking advantage of perfect "tag-you're-it" weather!