To hand raise a wallaroo joey, it takes a village and a mob 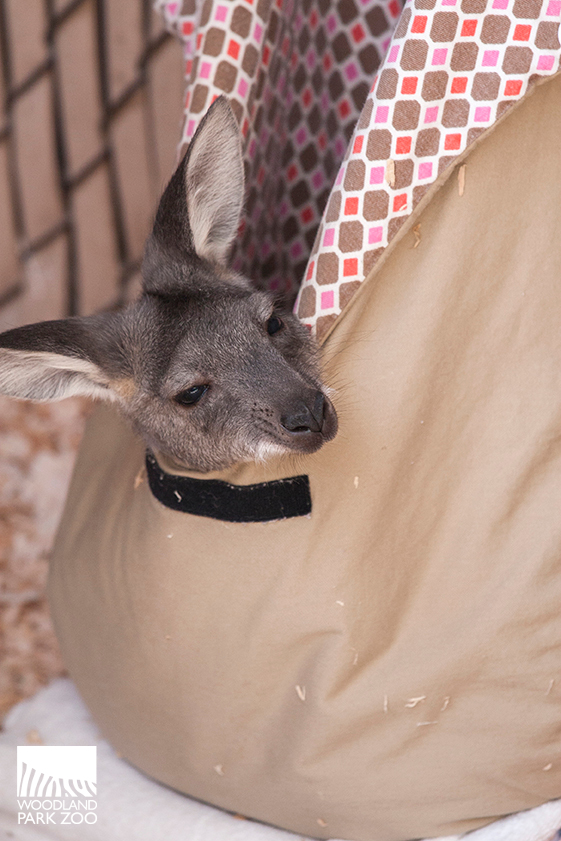 The tools of the trade for hand raising a wallaroo joey:

1. A heavy duty pillowcase-like pouch for sleepy time
2. A handmade bottle adapter equipped with customized parts all the way from Australia for feedings
3. A kangaroo plush so the baby can redirect his playful bites and kicks at something other than one of us!
4. A lot of patience, a lot of compassion, and a sharp focus on letting a wallaroo be a wallaroo 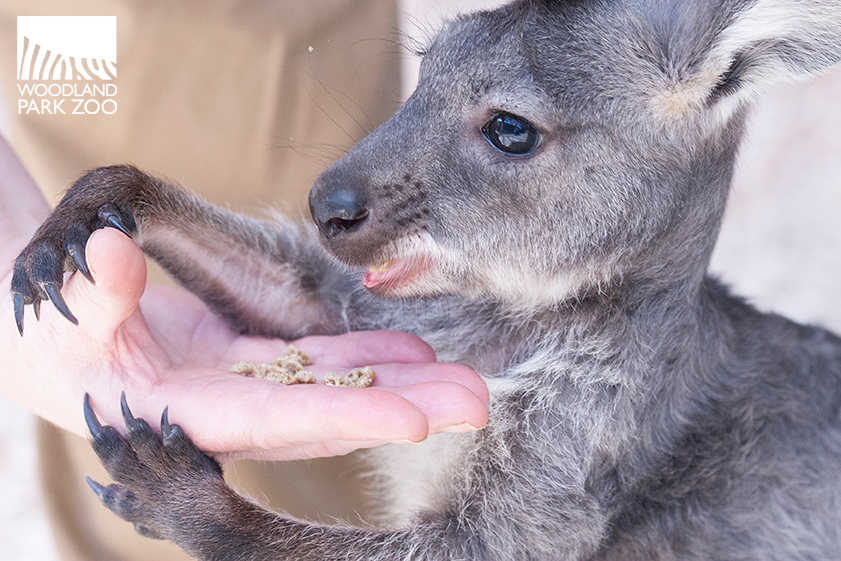 When it became apparent at six-and-a-half months of age that wallaroo joey, Yuri, wasn’t receiving from his mother the nutrition he needed to grow, we were ready to step in. But just as importantly when hand raising an animal, we’ve been getting ready to step back out.

For Yuri, first it took a village, but now it takes a (wallaroo) mob.

The first days of hand raising

Upon the first signs that intervention was needed, Yuri was taken to the zoo’s Animal Health Complex where he was continuously monitored and put on a rigorous bottle feeding schedule. While he spent most of his time initially in a pouch, veterinary technicians were with him 24 hours a day to feed him, hold him, medicate him and meet all of his needs,” said Senior Veterinary Technician Harmony Frazier. 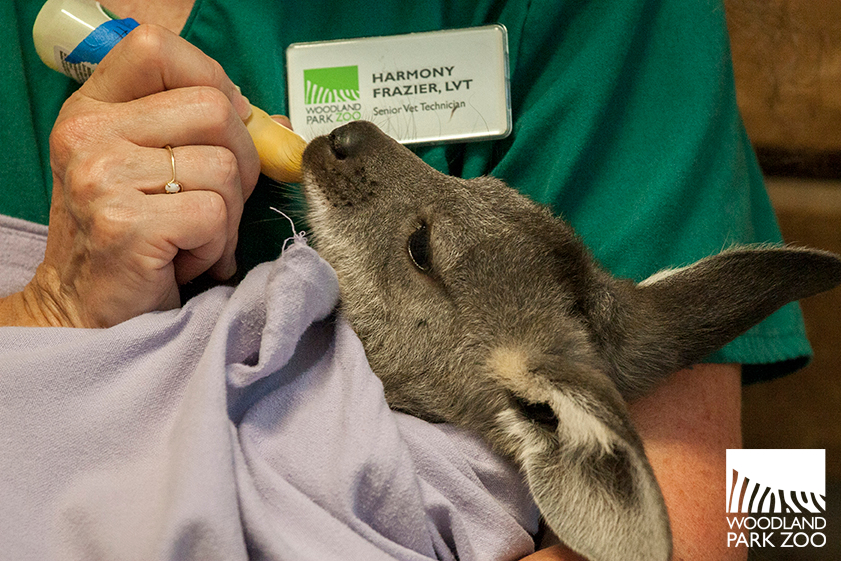 “Staff veterinarians checked in on his status daily and routinely ran blood and fecal tests. We were primarily monitoring his growth. We wanted Yuri to gain about 50 grams a day before he could return to the Australasia exhibit full time.” 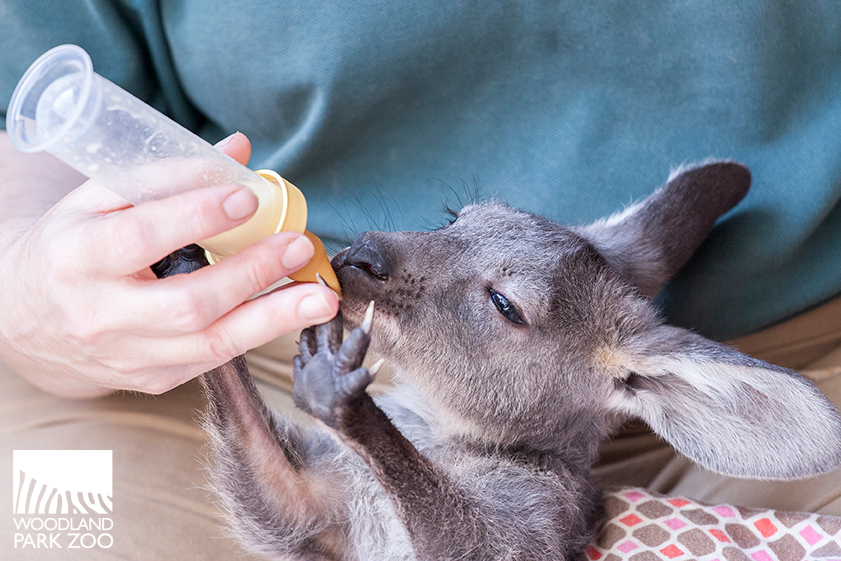 Just 10 days later, Yuri began one-hour-a-day visits to the exhibit to be reintroduced to the mob (a group of wallaroos). “We didn’t want to rush the integration process at the risk of delaying his growth and development,” said zookeeper Wendy Gardner. “But it remained important that Yuri interact with other wallaroos and exhibit wallaroo behaviors while being hand raised, so we gradually built up the amount of time he spent at Australasia [and with the mob] before bringing him back full time.” 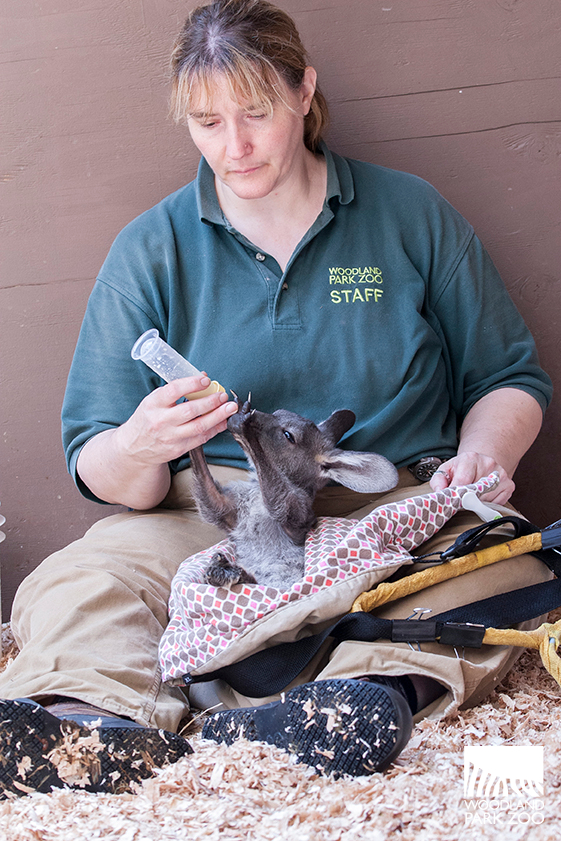 One of the most important steps in bringing Yuri back to the unit full time is to reintegrate him with the mob and make sure he exhibits normal wallaroo behavior. “One such behavior that we have observed is his readiness to box and play with his dad, Harry,” said Gardner. “You’ll often see this with females and their joeys and is a normal part of their development; a joey will pull on their mother’s ears, bite and kick and the adults usually just sit and take it. Yuri doesn't have that bond with his mom anymore, but it’s good to see that he is interacting with them, showing these behaviors and getting more comfortable in his new surroundings every day.” 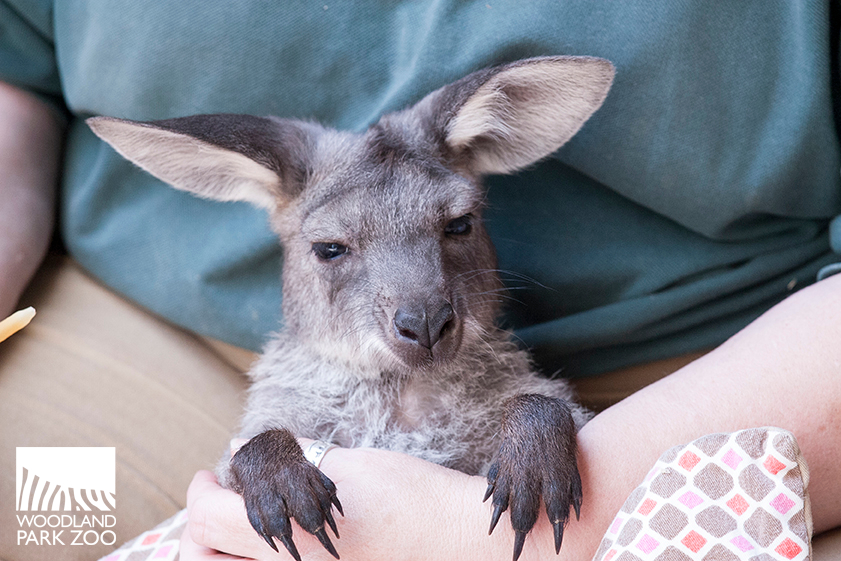 Yuri is gradually spending more time each day with the mob and continuing his hand raising routine with keepers and animal health staff. “He’s getting bigger every day and becoming quite the little powerhouse,” said Gardner. “Most wallaroos sleep quite a bit during the afternoon, but with Yuri, once he’s awake he’s jumping around and ready to go.” 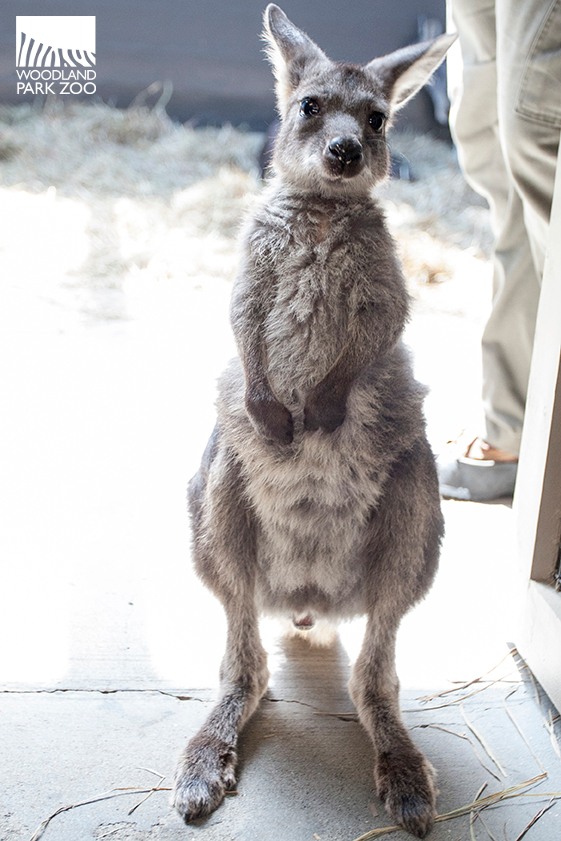 When out on exhibit, Yuri likes to explore. He’s often spotted hopping quickly from one end of the exhibit to the other and jumping on the other wallaroos. “I’ve been very impressed with how self-assured he is and he’s interacting well with the mob, he pays attention to their signals, which is so important, and something we cannot teach him.” said Frazier.

Yuri also has an off-exhibit space to himself where he can eat, sleep and play. “We’ve provided him with enrichment items to encourage wallaroo behaviors,” said Gardner. “He has a plush animal kangaroo that he loves to bite and kick, which allows him to play and be a wallaroo without exhibiting those behaviors on the keepers.” 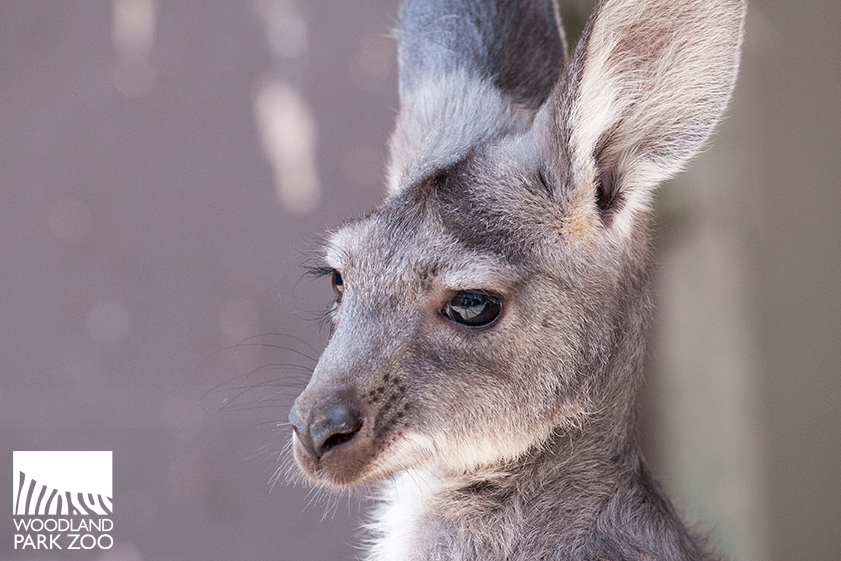 Along with his playful personality and, for the time being, his small size, Yuri has a very distinguishable characteristic that makes him easy to spot, his ears. “He is very curious and his ears constantly move around as he listens to everything that’s going on,” said Gardner. Yuri is an Aboriginal name meaning “to hear.”

Because he is being hand raised, Yuri spends a significant amount of time around humans. To promote wallaroo behaviors, keepers and animal health staff incorporate enrichment items into his daily routine. Pouches, similar to a pillow case but made from heavier material, are hung up for Yuri to sleep in. “If he were with his mother, he would have to jump into her pouch when he wanted to sleep or eat,” explained Frazier. “We want him to continue those behaviors so we hang up the pouch for him to sleep in and also hold one out for him to jump in before feedings.” 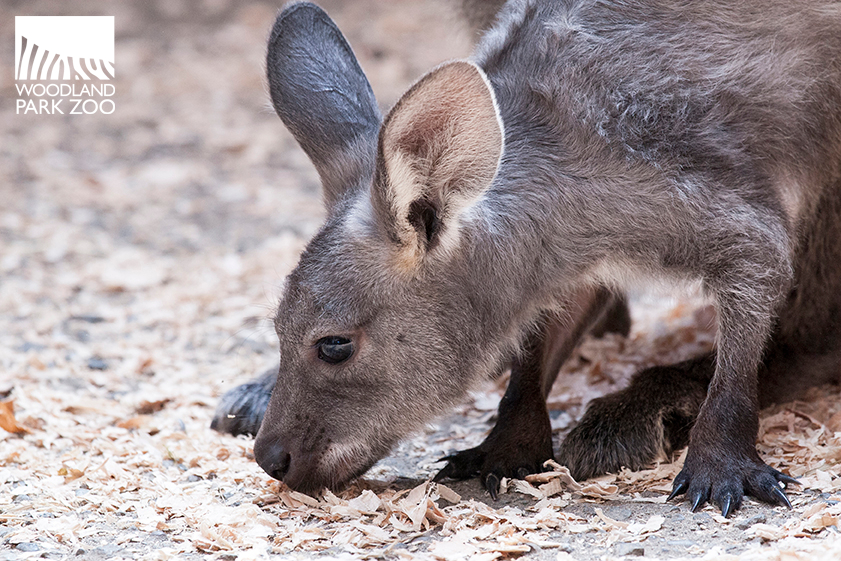 As Yuri continues to grow he will wean off of bottles and begin to eat more solid foods, a process that will take about four to five months. Keepers will also start weaning him from nursing inside the pouch to taking his bottles standing up as a joey at this stage would do naturally.

Eventually Yuri will leave Woodland Park Zoo to start his own family; but for the time being, he continues to steal the hearts of everyone he meets. “Yuri had a rough start and it was touch and go for a while but he was strong and determined to survive,” said Frazier. “It is so rewarding to see him prosper and to know the hard work and long hours have allowed Yuri to have a long, happy and healthy life.” 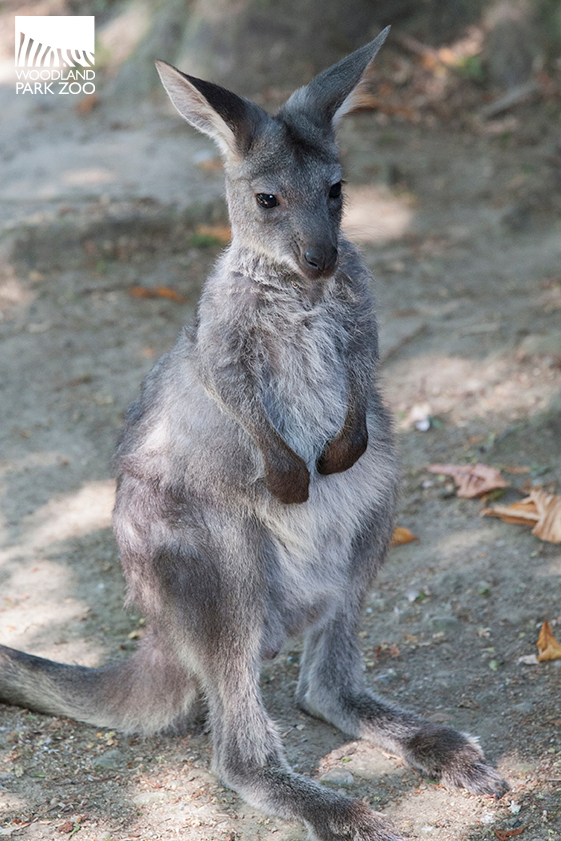 Anonymous said…
Thank you for putting out this fabulous report on Yuri!

Anonymous said…
Great article about the challenges and thoughtfulness that goes into the decision to hand rear an infant....and the joy from a successful effort. Thanks for all you do!
August 11, 2015 at 1:52 PM

Anonymous said…
Very inspirational story, but I wish WPZ could keep more of its "native" animals. I wish the exhibits could be enlarged so that more of our own animals--those we watch grow from birth--could stay here, rather than being shipped elsewhere. I know about the SSP protocols, but still....
August 11, 2015 at 4:02 PM