What do bowling, curling and rhinos have in common? You!

May 19, 2014
Posted by: Puget Sound Chapter of the American Association of Zoo Keepers

It’s almost time for the American Association of Zoo Keepers (AAZK) annual rhino conservation fundraiser, Bowling for Rhinos. But this year, the Puget Sound chapter of AAZK is going to try something a little different.

We’ll be curling for rhinos! 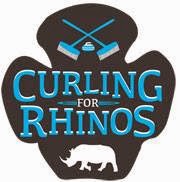 This is your opportunity to demonstrate your support for endangered rhinos and the worldwide effort to conserve endangered species. Please remember that when these animals are gone, it's forever; there is no bringing them back.

You can help the Puget Sound AAZK achieve its goal of raising $13,000 by any one of three ways:
1) Register for curling. As with all of our Bowling for Rhinos fundraisers, participants are asked to raise a minimum of $30 in sponsorship. Prizes will be awarded to the two participants at our event who raise the most in sponsor dollars.

2) Register to come to the party, hang out with us and show your support. This includes access to a taco bar, supplied by Pecado Bueno in Fremont, a raffle and bingo, and a marketplace where we’ll be selling t-shirts, Northwest Cellars Wine, Endangered Species Chocolate, and custom Curling for Rhinos scarves!

3) Can't make it to the event? Find a participant on our PSAAZK webpage and make a donation in their name. Registration and Donations can be made at psaazk.org and at brownpapertickets.com.

Help strike out extinction at the Puget Sound chapter of the American Association of Zoo Keepers 2014 Curling for Rhinos fundraiser.

This event is a great opportunity to try curling because Granite Curling Club is a members-only club not normally open to the general public. Don’t worry about whether or not you or others know how to curl, because an hour of instruction on the ice is included as part of the event. Sign up early to secure one of only 80 spots (40 curlers per shift).

Each year the American Association of Zoo Keepers (AAZK) sponsors Bowling for Rhinos, a fundraising bowl-a-thon. Over 60 AAZK chapters participate throughout the U.S. and Canada. Bowling for Rhinos provides zoo keepers of the world an avenue to raise funds and awareness for rhino and habitat conservation.

The beauty of the idea is that these fundraisers are organized by volunteers, who donate their time and organizational skills to help raise money to send directly to the places in need. Since all the people involved are volunteers, 100% of all donations are sent directly to these in situ rhino conservation areas!

Bowling for Rhinos began on a small scale and is now the signature conservation effort of AAZK. Events across North America raise over $300,000 annually. In 1990, AAZK began by supporting the Lewa Wildlife Conservancy (formerly Ngare Sergoi Rhino Sanctuary) in Kenya and has since expanded the program.


What does Bowling for Rhinos support?

In Kenya, Bowling for Rhinos supports the Lewa Wildlife Conservancy where our donations help protect both black and white rhinos and most of the other species native to East Africa.

In Indonesia, Bowling for Rhinos supports the remaining Javan rhinos at Ujung Kulon National Park, and the Sumatran rhinos in Bukit Barisan Selatan and Way Kambas National Parks through the International Rhino Foundation.

Bowling for Rhinos also supports Action for Cheetahs in Kenya. Cheetahs share much of the same habitat as rhinos and by working to conserve cheetahs we are also saving rhinos and the countless other species that call that habitat home.