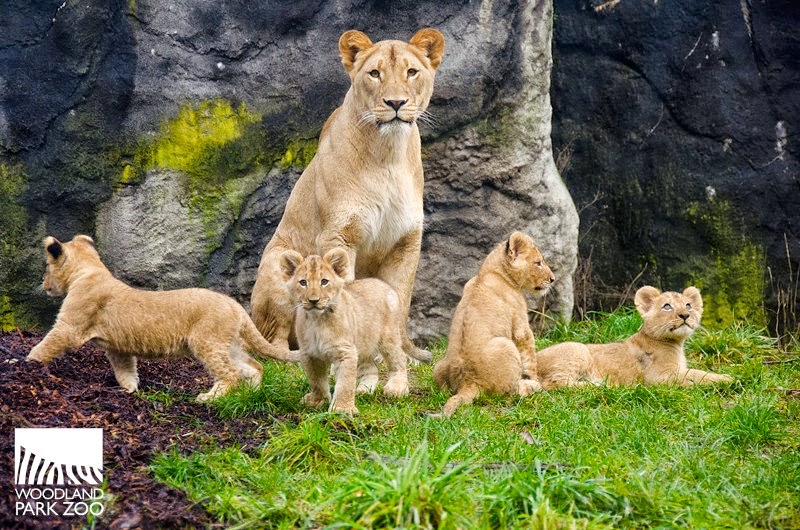 Anonymous said…
They are so beautiful - I have total envy for Dennis Dow and his position as photographer at the zoo, I totally love his photos

leslie said…
We love coming to the zoo with our kids and they still enjoy every moment of their days there at 17, 15, and 13!!!! Will never forget the first time we saw the babies at feeding time! We still talk about it. Thanks for the update!
October 29, 2013 at 8:32 AM

Anonymous said…
Wonderful update. Just returned from L.A. where I went to the zoo with my granddaughter. Although nice, doesn't compare to the wonderful work that's been done with our own zoo. Thank you all for your continuing efforts to provide a natural environment for the animals.
October 29, 2013 at 8:32 AM

It'll be hard to see them go, but by moving on, they'll have the chance to mature into breeding adults and each create their own families, which we don't have the room here to handle. The two girls will go together and the boys will go to different zoos.

This also means that Adia will have the potential to become a mom again to another litter in the future, so we may have more cubs to come if things go well!
October 29, 2013 at 9:25 AM

Anonymous said…
What time on Nov 8th will you be giving them their birthday treats?
November 7, 2013 at 8:38 PM

Anonymous said…
Really disappointed to see that one (and maybe more) have already left with no posts on your website or social media telling us to come say goodbye and send them off. Your members have been here to support you along the way and deserve to know when they are leaving.
January 25, 2014 at 11:43 PM

Woodland Park Zoo said…
We understand your disappointment, Anonymous. One male cub left a week ago. His move was a moving target with all of the weather issues impacting travel and traffic across the country this past month, so we lost out on the chance to prepare a communications message well in advance. But with the next two moves planned for February, we'll have the chance to give our friends and fans a heads up. Trying to organize all of that information for an update shortly. Thanks for your understanding!
January 26, 2014 at 10:10 AM

Anonymous said…
I still find it hard to believe you couldn't find time to post a quick message to Facebook as soon as you found out... that doesn't require a bunch of editorial work. I don't believe you can up and decide to move a lion in just a few moments. I don't expect anyone to admit it, I believe your communications team was either not informed, forgot, or was specifically instructed not to post anything.
February 8, 2014 at 12:46 PM