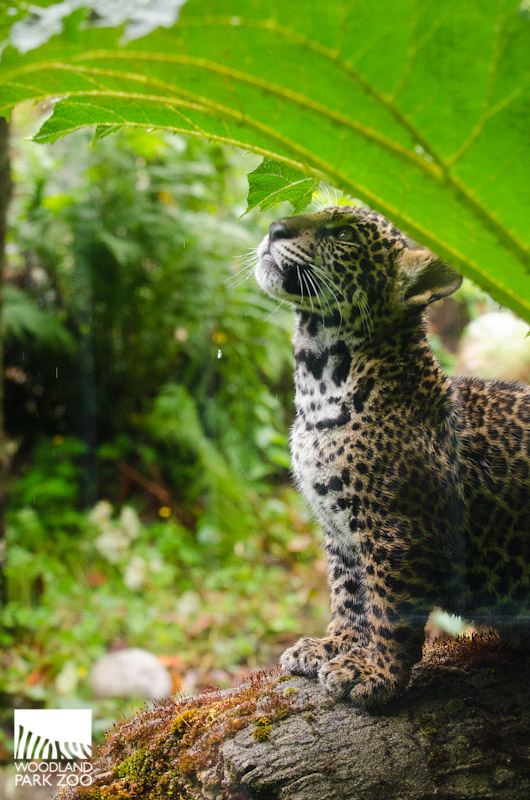 It’s a good thing these jaguar cubs are creatures of the rain forest, as their very first steps outdoors were soggy ones. 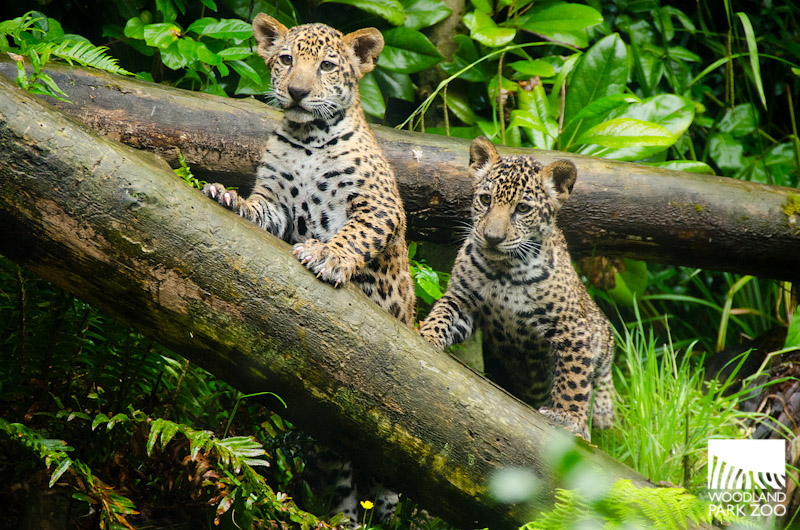 Three-month-old jaguar triplets—brother Kuwan and sisters Inka and Arizona—had their first practice session outside today. The trio is getting ready for their official public debut, which should be coming up any day as the cubs get used to their new digs. 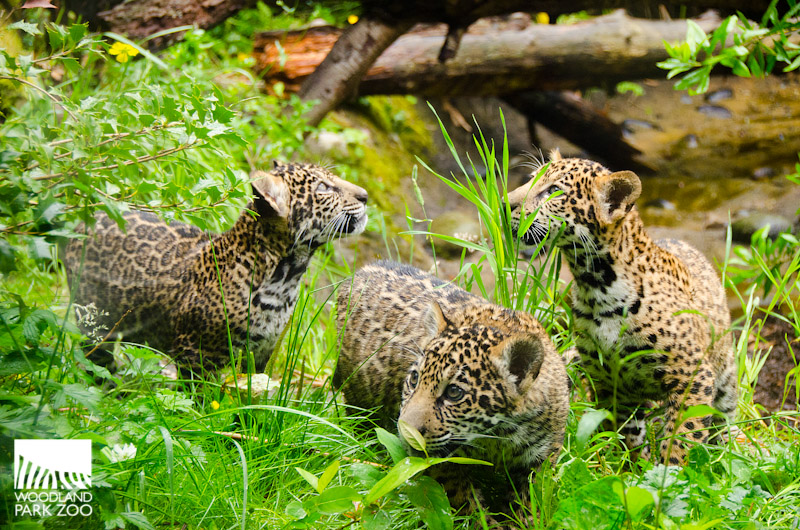 Before the zoo opened to the public this morning, a lucky few of us zoo staff gathered around the exhibit at Jaguar Cove and watched to see what would happen when the jaguars’ den door opened. Out came the cubs for the first time, bouncing out with less of a predatory slinking and more of an enthusiastic tromping. 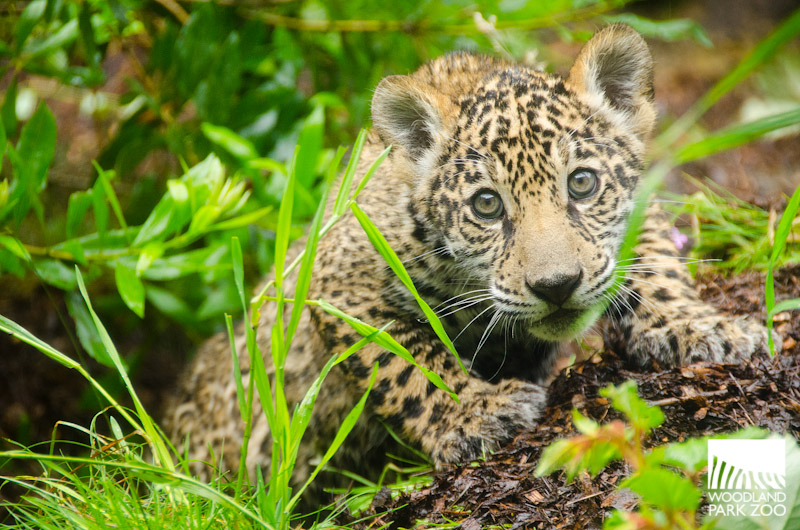 The keepers predicted Arizona, the boldest of the cubs, would be the first one out, and indeed her head was the first to be spotted emerging through the door. She sniffed absolutely everything in sight, so it was a sloooooow beginning for those of us watching. 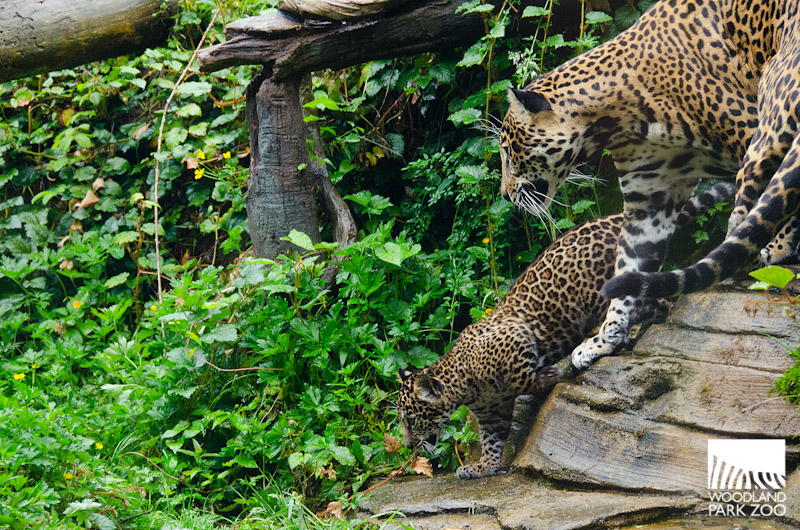 Then mom Nayla emerged and made her way around the space, inspecting the logs and some of the softer, bedded areas keepers put out for the cubs. Arizona tried to follow in mom’s footsteps, but it turned out to be a bigger challenge than Arizona might have expected. 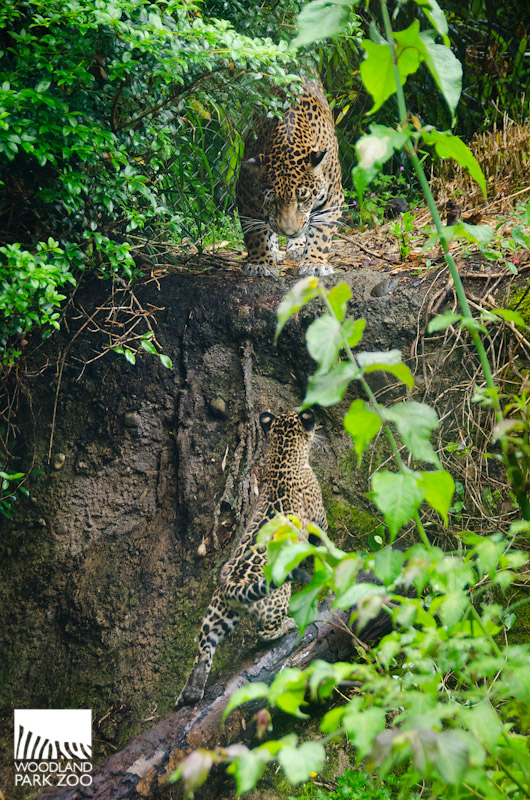 Nayla would effortlessly navigate across a wedged log to make her way down a slippery slope, while Arizona mostly tumbled her way down in mom’s shadow. Then Nayla would trot back up the log, but the slippery monolith intimidated Arizona. Instead, the little one would try to jump her way back up the side of the slope, digging her claws into rock and mud, willing herself up the side. 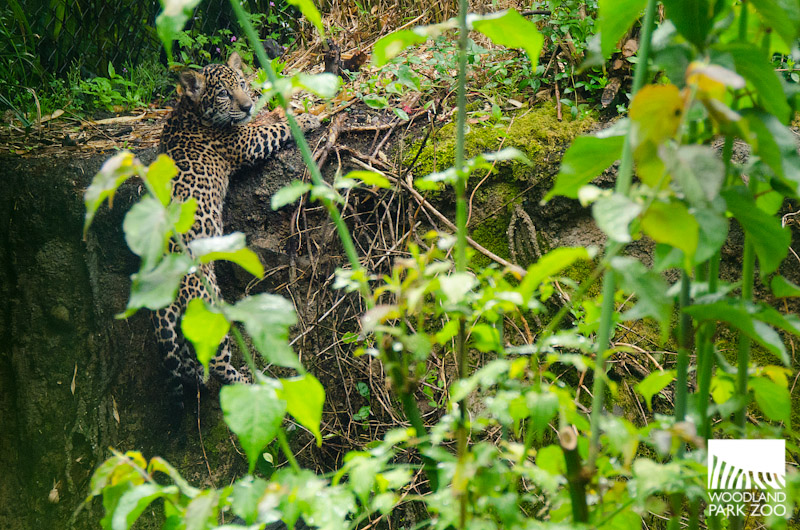 Jaguars can climb well and are even known to prey on treetop dwellers like spider monkeys in the wild. It’ll be a while before the cubs’ climbing gets that proficient. For now, trial and error will help them figure out how to use their muscles and claws, even when gravity and rain try to mess with them. 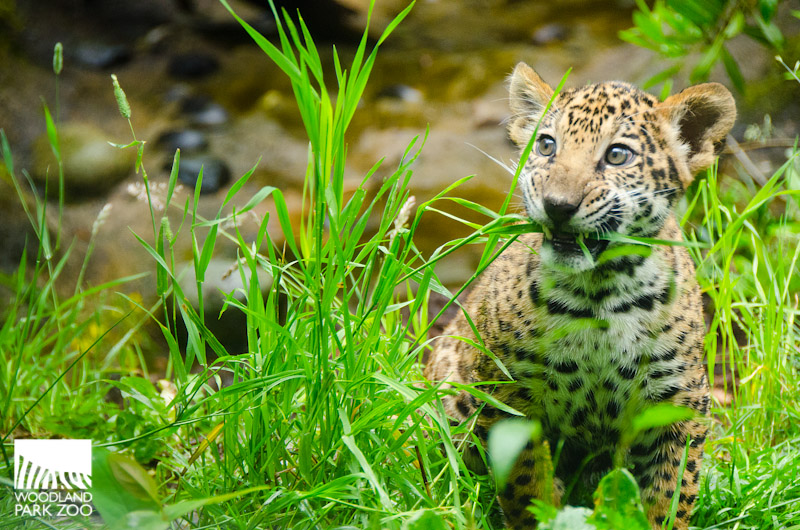 The cubs explored different sights, sounds and experiences, each one finding something that fit their style—the bold Arizona adventuring up and down slopes, the quiet Kuwan tasting leaves back near the den door, and the curious yet cautious Inka padding through puddles, tagging back and forth between brother and sister. 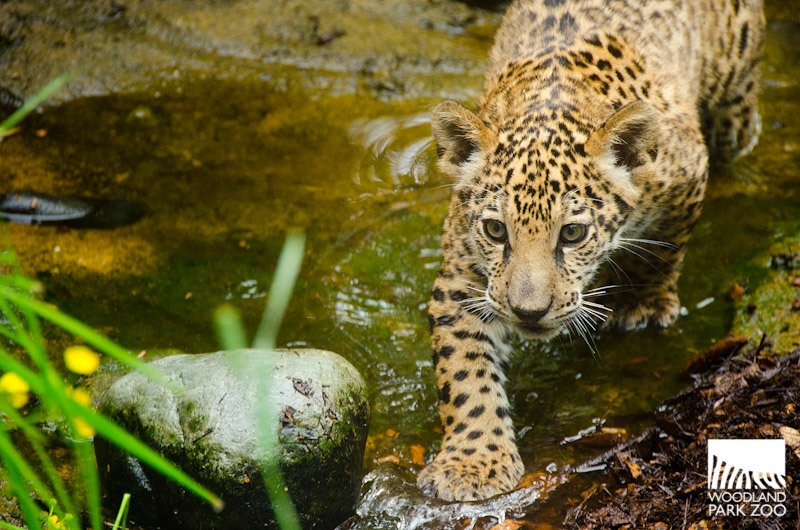 To keep an eye on all of this, mom Nayla frequently climbed to the topmost point of the exhibit to be able to see all of her cubs at once. 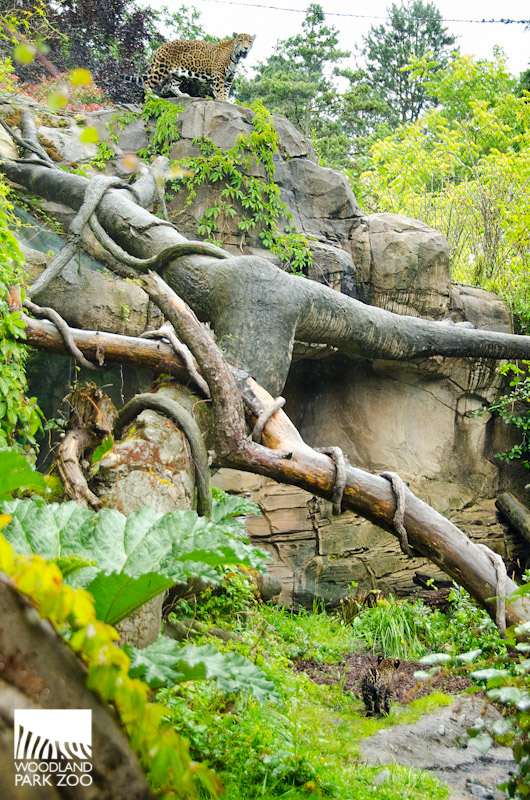 Eventually all three came together with mom and began navigating new spaces together like the cave, the pool, and the front slopes of the exhibit. 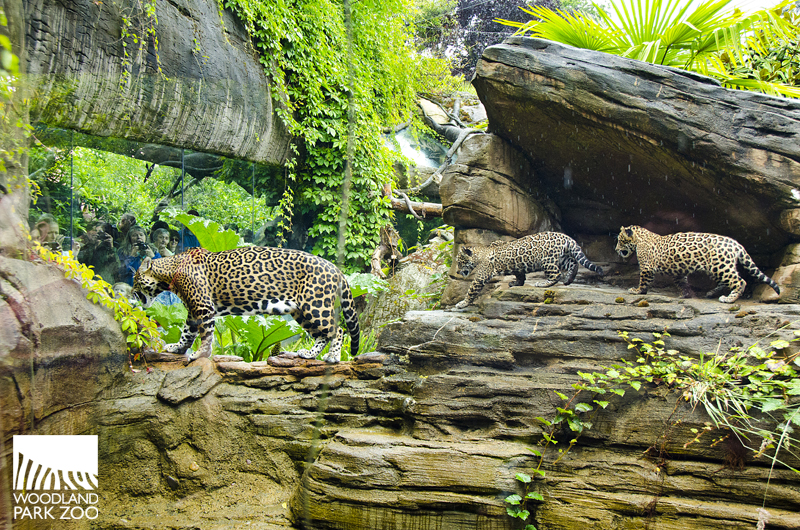 Adult jaguars are primarily solitary, but these youngsters are still at that playful age where they socialize with their siblings and learn how to be a jaguar by staying close to mom and watching her moves. When mom dared to walk away or out of their sightline, the little cats would cry out. We expect them to grow more independent, though, the more time they spend out there. 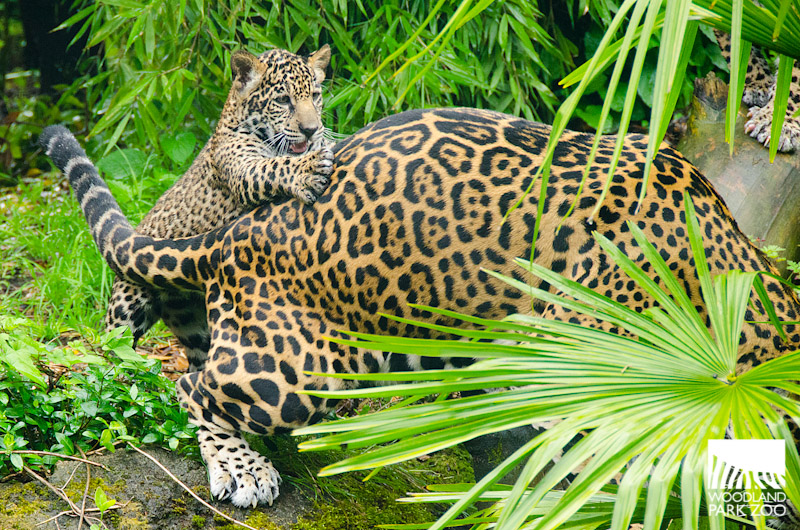 Keepers were stationed at different viewpoints and used walkie-talkies to call out observations and updates to each other through the first few hours. They agreed that once the family returned inside—the den door was left open to give them the choice—the keepers would regroup and decide what they might try a little differently at the next practice session. Do we need more bedded areas for tumbling? Did the whitewash on the window—meant to teach the cubs that the window is a barrier and not a clear thing to run through!—get the job done? 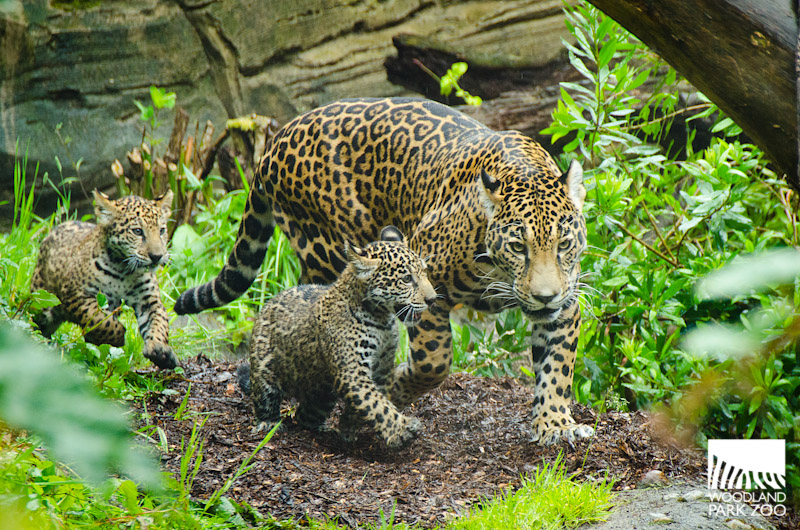 With a few adjustments on our end and a few more practice sessions on the cubs’ end, we’ll be ready for an official public debut in no time. We expect the cubs to make some ventures into the exhibit over the weekend, though the schedule will be unpredictable and there may be limited viewing if barriers are needed to give the cubs space to adjust. Once we have official viewing hours and a true debut date, we’ll be sure to share! 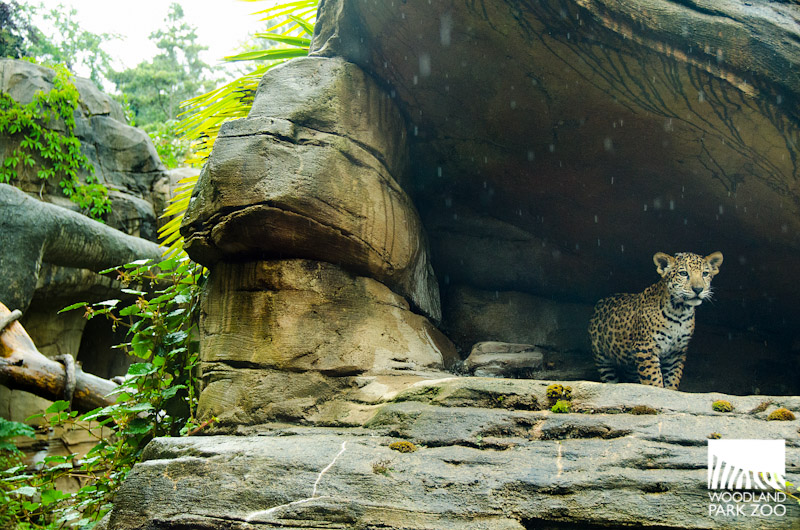 Until then, enjoy this Instagram video of the trio at play:

Love jaguars and want to support our conservation efforts to protect them and other wildlife? Become a jaguar ZooParent today! 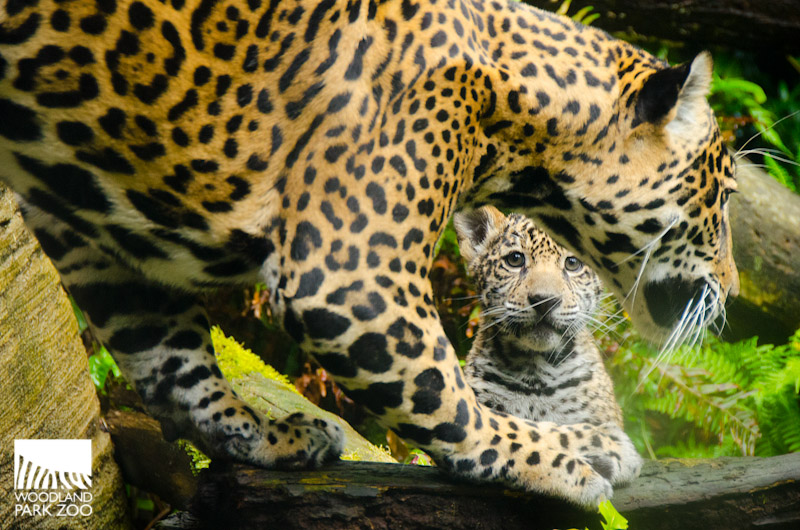 Your ZooParent adoption helps us care for the animals at the zoo and sends $5 directly to field conservation projects in the wild. 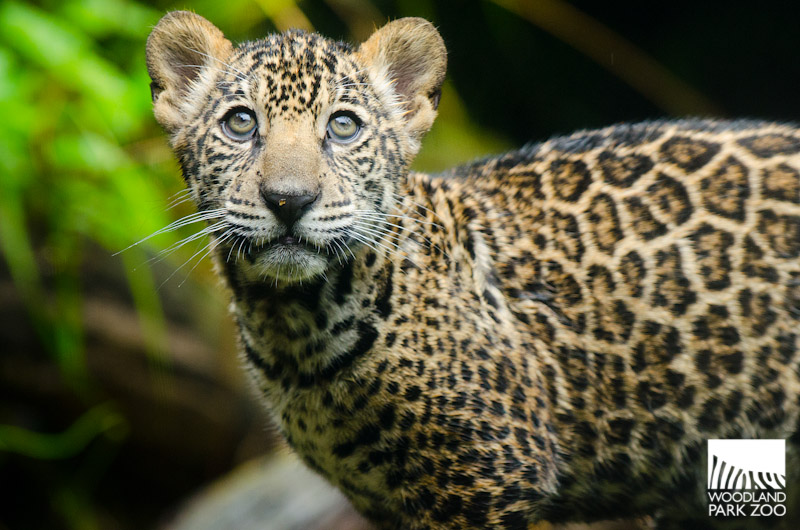 janet said…
Wow, they've gotten so big! They are adorable and beautiful; these photos and the video are so enjoyable; thank you! WPZ does great work, that's for sure!
June 28, 2013 at 8:34 PM

Anonymous said…
They are already so much bigger than in these pictures - and they are beautiful! Thank you for the posts!!
August 6, 2013 at 1:51 PM