Want to see what the tree kangaroo joey is up to? Now you can watch joey and mom through a limited-engagement web cam, streaming live from the family’s behind-the-scenes maternity den! 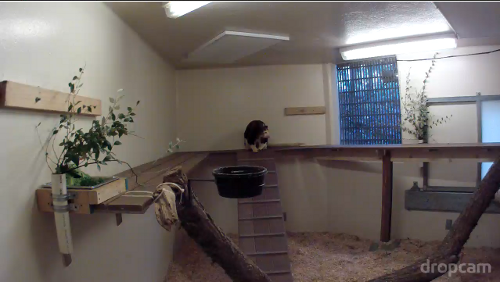 Screenshot taken from the live web cam (you can stare at it, but it won’t move in this pic!). Watch the tree kangaroos live at www.zoo.org/animalcam

Born the size of a lima bean in June 2012, this tree kangaroo baby is just starting to emerge from its mother’s pouch. Through the video monitor, you can see the joey and its mom, Elanna, in a behind-the-scenes maternity enclosure. The cam is streaming live from one of their rooms, but the family has access to an adjacent room, so there may be times when they are not visible on camera. When's the best time to watch? Tree kangaroos are crepuscular, which means they are most active in the morning and at dusk.

Mom and joey will remain behind the scenes to allow them to thrive in a calm, secluded environment. The web cam lets us check in on them without disturbing their environment. There are currently no plans for the young family to go on view, but you can visit an adult tree kangaroo on your next trip to the zoo when you stop by the Day Exhibit.

This rare birth is part of the Species Survival Plan, a cooperative breeding program across Association of Zoos & Aquariums-accredited zoos that seeks to maintain genetic diversity for healthy populations, while contributing to research and field conservation for endangered and threatened species.

The tree kangaroo cam is a limited-engagement event. In a few weeks, the cam will move on to another spot at the zoo—still to be determined—and then keep roving week to week. The web cam will travel around the zoo to feature new babies, behind-the-scenes happenings, and cool new angles on the exhibits you know and love. Bookmark www.zoo.org/animalcam and tune in weekly to see what's new.