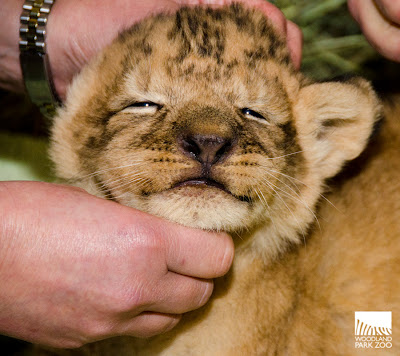 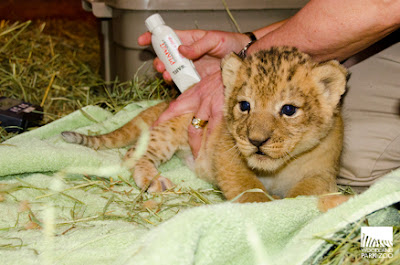 Last week, our four lion cubs received their first health check-up and the exam revealed the quadruplets are healthy and that we have two males and two females on our hands. 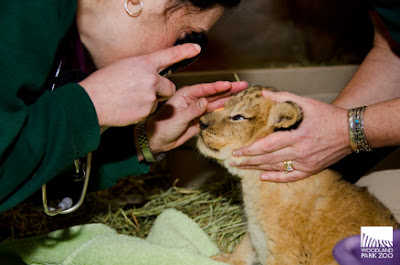 Our team of veterinarians performed the exam, which included a weigh-in, fecal sampling and an overall assessment of their health. They’ll get the first of a series of vaccinations at the next exam coming up in a few weeks. The cubs turn four weeks old this Saturday. 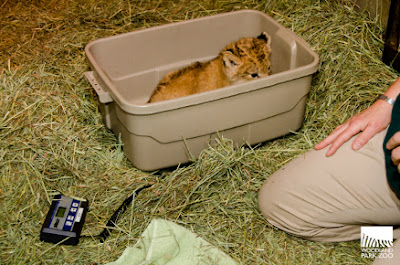 Each cub weighs between 8 and 9 pounds, which is in the normal weight range for their age. Vets noted that the cubs had full, round bellies, meaning they’re nursing regularly. Adia continues to show excellent maternal skills, and she has herself some robust, healthy cubs. 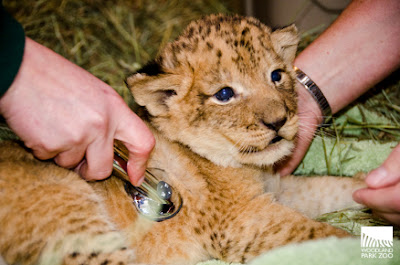 Mom and cubs remain in an off-view maternity den that allows the family to bond in a quieter environment. The cubs will go out in the public exhibit when they are older and outdoor temperatures reach a minimum of 50 degrees. Until then, zoo-goers can watch recorded video of the cubs at a kiosk stationed at the lion exhibit or at Zoomazium. We’re also posting updated footage and images here and at www.zoo.org/lioncubs.

shelly said…
How do you get them away from their Mom? Does she let you grab them willingly because she knows you, or do you have to get her away from them firs & sneak them when she's not looking?
December 5, 2012 at 4:03 PM

Victoria Marshall said…
I bet they let Adia outside for some exercise and then go get the babies!! Can HARDLY wait till Spring!!!
December 5, 2012 at 4:07 PM

Woodland Park Zoo said…
Shelly -
We have been working with Adia to get her comfortable with shifting outside for a little while at a time, which allows us access to the cubs briefly. We handle them as little as possible during these shifts other than for check-ups so that we don't interfere with their bonding.
December 5, 2012 at 4:29 PM

Anonymous said…
We are a group of volunteers and opening a new scheme
in our community. Your web site offered us with valuable info to
work on. You've done an impressive job and our entire community will be thankful to you.
Review my website - advanced african mango
December 12, 2012 at 12:07 AM