What could penguins and St. Bernards possibly have in common? 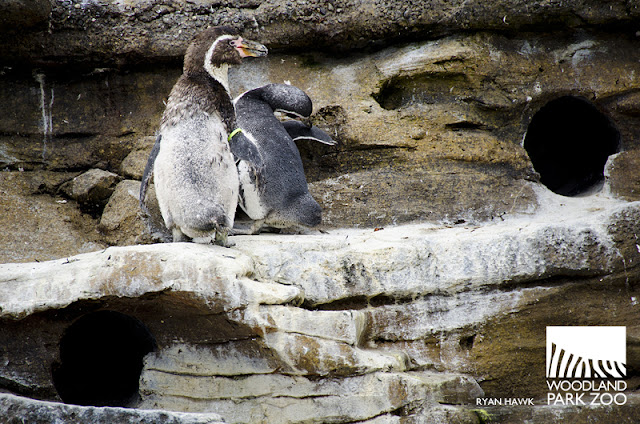 I overheard a visitor at the Humboldt penguin exhibit express concern over a “sick” penguin. I looked at the penguin, “Oh my, he is having a bad hair day for certain.” I immediately allayed her concerns by stating, “He is just blowing his coat.” I then quickly realized that only a large-breed dog lover would know what that is. I couldn’t think of the bird version word for “blowing his coat.” Wracking my brain it finally came to me. Molting! He is molting.

Penguin molting is a perfectly normal, annual event during which they replace all of their feathers. Penguins have more feathers than most other birds, with about 70 per square inch. Their feathers are stiff and overlap to waterproof and insulate their body. Molting can appear patchy as they lose a large number of feathers in a short period of time throughout the body, with old feathers falling out before replacement feathers grow in, a process known as catastrophic molting.  Before molting, a bird eats a large amount of food and increases its body fat. This extra fat helps fuel the molting process. While molting, the bird’s appetite and activity decreases.

Similarly, St. Bernards lose all of their undercoat once a year. Like the feather molt, the dog’s “coat blowing” makes way for new fur leaving a considerably larger mess. During this process St. Bernards look equally disheveled. Saints bad hair days last about one month.

Do penguins sneeze? Video courtesy of our friends at New England Aquarium.

What else do penguins and St. Bernards have in common, you ask? Penguins have a supraorbital gland which enables them to drink salt water in addition to fresh water. The gland withdraws excess salt from the penguins' blood and expels it in a concentrated solution (salt snot) which dribbles down its face. The penguins then give their heads a good shake which looks just like a sneeze. St. Bernards often give their heads a good shake, alleviating extra slobber from their faces. Sometimes dogs also do this because their ears itch. I wonder if penguins’ ears itch sometimes too?