News from the Field: Looking back on Punta San Juan


This post is part three of a three-part series based on Woodland Park Zoo penguin keeper John Samaras’ work in Punta San Juan, Peru with a zoo conservation partner. 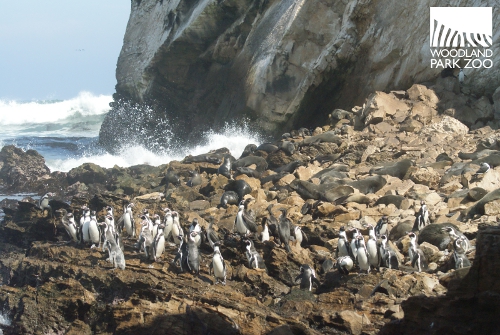 As I look back on the time since my trip to participate in the Humboldt penguin health assessment in Peru, I feel fortunate to have been able to share my experiences with so many people.  From giving a slide presentation to zoo staff and volunteers, to including vivid details of the penguins’ native habitat in my public keeper talks and on special tours, I can draw on the memories of that incredible place and the time and experiences I had there. I began working with Humboldt penguins at the Akron Zoo in Ohio in 1998, and was immediately hooked!  I knew that these peculiar penguins were native to the desert coast of Peru and Northern Chile, they nested in burrows and their main prey was anchovies.  I learned about their behavior from a first-hand perspective through caring for them at the zoo and reading about their natural history. 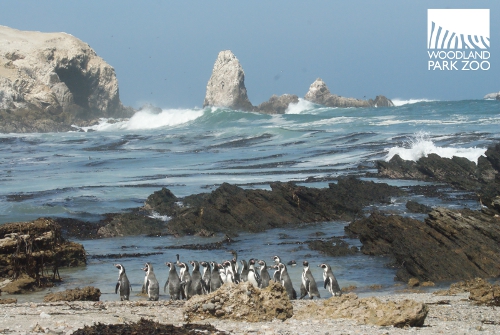 But now that I’ve seen them in their native habitat, it adds a new dimension of knowledge and appreciation for this species.  I knew they dug burrows in the sand and dirt on the coast, but what else I learned about their nesting behavior was amazing! They also nest in rock crevices amongst the jagged cliff walls, open nests under rock overhangs, in caves and even dig burrows and use artificial burrows (put in place by biologists to increase nesting options) at the top of an 80-foot cliff! 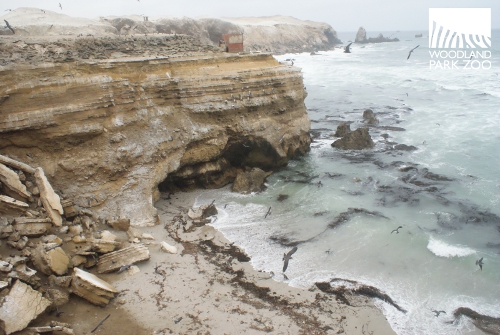 These awkward, foot–and-a-half tall birds are able to scale (actually hop) down the steep slope of this cliff to get to the sea and then make their way back up on a repeated basis to provide for and raise their chicks.  It was great to see them swimming in the turbulent ocean, hauling out and basking on the jagged rocks and sandy beaches, and mingling comfortably with so many other species. 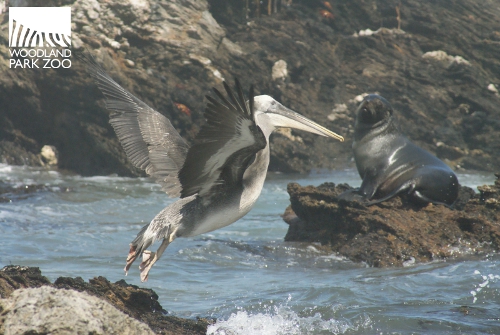 Another thing that struck me was the incredible abundance of life that exists there on the coast and on out into the sea, even though we drove seven hours along the desert coast to get there and it’s so arid in the region that plants don’t grow there.  It’s like being on the surface of the moon (especially with the thousands of cormorant nests that looked like small craters) until you come to the point where the desert abruptly ends and rock walls cascade steeply down to the sea below. 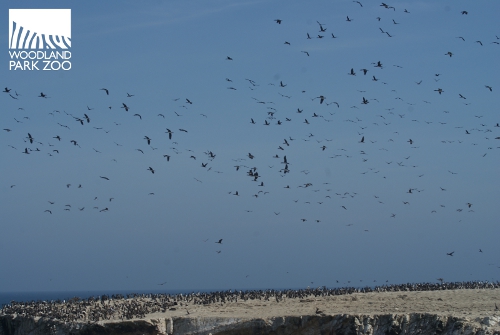 The view before me was astounding!  The sky was filled with birds flying around in every direction, and a large area of desert was blackened by an estimated 500,000 Guanay cormorants that sprung a constant stream of birds going off to their feeding waters along in the Humboldt current.  During breeding season, the population climbs to a million cormorants!  The striking Inca terns and Peruvian boobies (a plunge-diving species) were drifting in the swift winds and perching on the steep rock walls. 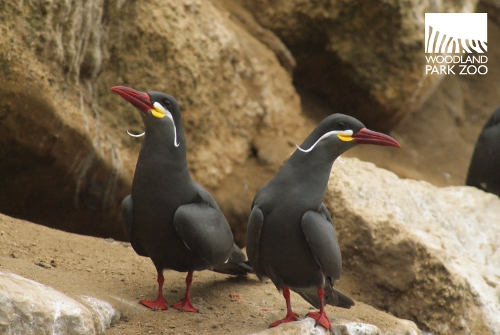 Tens of thousands of South American fur seals and sea lions piled over each other on certain beaches and covered every square inch.  There also were many that were swimming in the violent surf and hauled out, sunning on the jagged rocks that peppered the coast.  All of this life with the background of the beautiful blue ocean, the white caps of the crashing waves, and the huge rock formations and cliffs was a truly breathtaking scene. 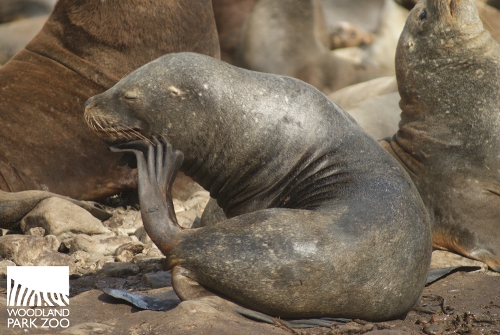 All of the animals that I saw got nothing from the land other than a place to nest or rest.  There is nothing else the desert can offer.  But it is the sea where all of these animals hunt and eat and are able to sustain themselves and their young.  Without those anchovies, mackerel and sardines off the coast in the Humboldt current upwelling, none of these animals would be there.  Actually, what I saw when I was there is only a fraction of the historic populations of these species prior to decades of overfishing and unregulated guano harvesting. 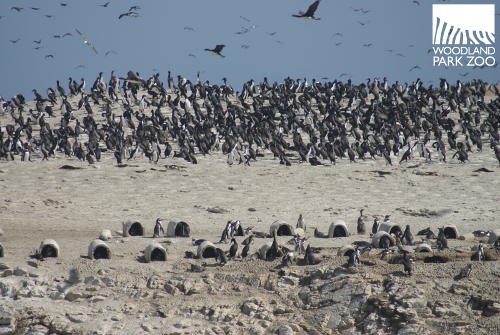 Going to Peru was also an amazing opportunity to meet and work with other zoo colleagues and with the Peruvian biologists who dedicate so much time and effort in trying to preserve these endangered penguins.  Everyone I worked with was kind and professional, and the atmosphere was relaxed but the work was serious. 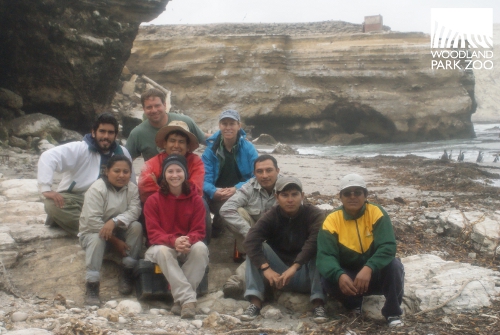 One of the sad parts of the experience was seeing the large amounts of plastic that were scattered about the Peruvian beaches.  There were plastic bags, bottle caps, toys, water bottles, everything you can imagine.  There were particles of plastic that had broken down so small, they were same size as the sand on the beaches!  There were also pieces of plastic mesh with the skeletons of various species of birds entangled in them.  It was a sobering thought that even in such a remote place as this, the effects of our disposable lifestyle are evident everywhere.  When we “throw things away,” it always goes somewhere. 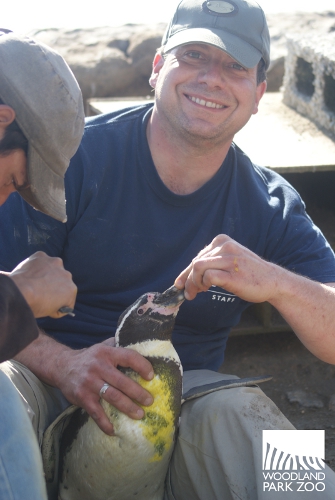 One thing that I didn’t mention in my previous blog is that the 51 penguins that we did physicals on were all adults. The chicks were just weighed and measured, then kept warm in safe hands while the adults were attended to. The average length of time from catch up to release was about 12 minutes. We performed a lactate test (to measure lactic acid levels, an indicator of stress) after catch up and just prior to release, and found that stress levels actually lowered significantly by the end of the procedures. The chicks or eggs would be put back into the burrow prior to putting the adult back in. Penguins have incredibly strong parental bonds with their chicks and eggs and immediately cover them upon returning. Our actions don’t disrupt the family’s bond, they’re too strong!


I really appreciate the opportunity to have gotten to go to Peru and see where these fascinating Humboldt penguins live and bring the experience back to Seattle! It was also an honor to participate as a representative of Woodland Park Zoo and be a part of one of our conservation projects abroad. 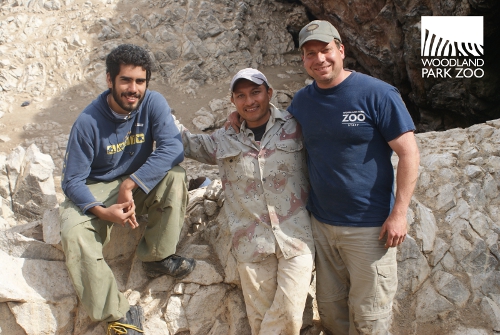 After being to Punta San Juan, I realize just how effective our penguin exhibit is in making you feel like you’re immersed in the place where these penguins are from!  It was the opportunity of a lifetime!