January 24, 2012
Posted by: Rebecca Whitham, Communications
How do you celebrate an ocelot’s 1st birthday? With a turkey cake and mouse candle, of course! 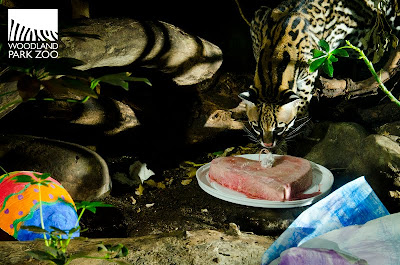 Our little Evita is not quite so little anymore. To celebrate her turning 1 year old last week, Evita’s keepers prepared a lovely birthday surprise including some wrapped presents (boomer balls generously bought for Evita from our animal enrichment wishlist), a papier mache ball with a mouse inside, and a heart-shaped frozen cake made from ground turkey, turkey breast and prepared feline diet with a “candle” that I hope to never see on any cake I eat—a mouse with its tail sticking up like a wick! 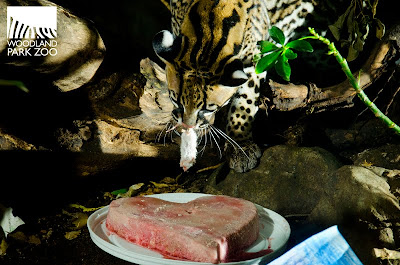 Evita was slow to investigate her treats until keepers added an unexpected twist—a fresh pile of snow picked from just outside the Tropical Rain Forest exhibit. Evita’s exhibit is near 80 degrees year round, so the snow brought out her curiosity. She rubbed her head in the snow and batted at it with her paws before moving on to the other treats. 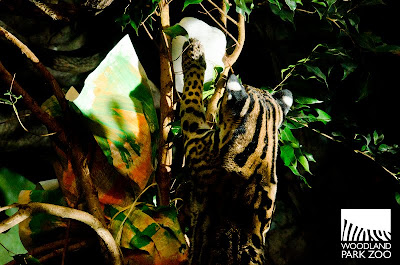 The mouse candle was first to go—Evita plucked it right out of the cake to munch on. Then one by one she inspected and tore into her other treats like any birthday girl would. 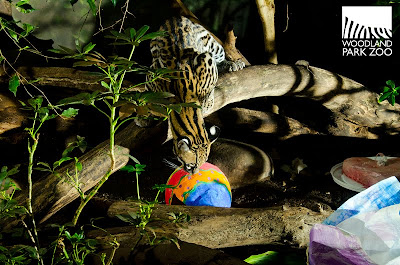 In the wild, an ocelot kitten will begin to hunt on its own by around 18-24 months of age and by that time is ready to leave its mother’s side. As Evita is now reaching that age, we expect to find a new Association of Zoos & Aquariums accredited zoo home for her soon so she can establish her own territory away from her parents and find her own mate.

Anonymous said…
Thanks for sharing her birthday with us!! It is a joy to see her enjoying her presents.
January 24, 2012 at 2:21 PM

Birthday Gift Ideas said…
Those are great so lovely ideas. I am so inspire your ideas.Thanks sharing..
February 9, 2012 at 12:21 AM