For the second year in a row, Asian elephant Chai made her prediction for who will win the Apple Cup. Last year her pick of University of Washington proved accurate when the Huskies won. This year she picked the Washington State University Cougars to win. Do you think her prediction will prove true or will Chai have broken her perfect record of one?

The wind and rain this morning didn’t stop a food-seeking Chai from bounding onto the field toward the identical Husky and Cougar treat piles made up of hay, apples, bamboo, football-shaped icepops, papier-mache team helmets and oversized papier-mache apples stuffed with biscuits and more apples. Ignoring the boos from the Husky fans in the crowd, Chai went straight to the Cougar pile first—the action that made her pick of the Cougs official. She munched through much of the Cougar goodies before turning to the Husky pile and snacking on those treats too. 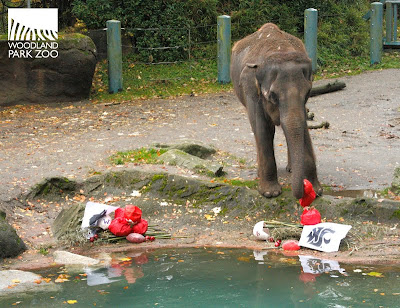 Those of us watching tried to find meaning in the littlest things. Did Chai intentionally squash the Husky football icepop? Did she reveal her true leanings when she tossed the Coug flag into the pool? 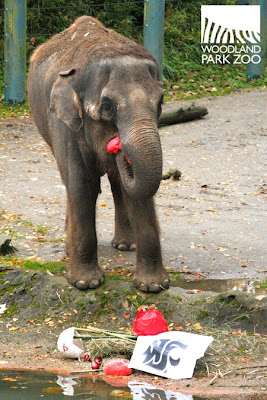 In the end, Chai thoroughly enjoyed apples from both the Coug and Husky piles, so maybe she’s just rooting for a good game.

Today’s pachyderm prediction is a part of the zoo’s admission discount in celebration of the game. Now through Nov. 27, Husky and Cougar fans receive half off zoo admission by sporting any garb from University of Washington or Washington State University, such as a jersey, sweatshirt, hat or gloves, or showing a valid student ID from either university. The admission discount applies only to the child or adult wearing the university sportswear and is not to be combined with other discounts or promotions.
Photos by Dennis Dow/Woodland Park Zoo. Video by Ryan Hawk/Woodland Park Zoo.