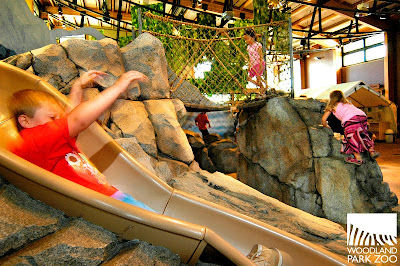 Happy 5th birthday, Zoomazium! We’re celebrating 5 years of child’s play in Zoomazium with a look this week at what it means to be 5 for humans and different animals. Then the party continues this Saturday and Sunday, Nov. 5 and 6, with cupcakes, live entertainment and birthday-themed activities at Zoomazium including enrichment treats for some of the zoo’s notable 5-year-old residents.

In this blog post, we spoke with penguin keepers at Woodland Park Zoo to learn more about what it is like to be 5 years old for a Humboldt penguin. 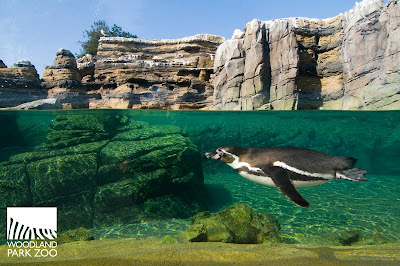 Q: Human children at age 5 are still very young and completely dependent on their families for care. Give us a brief description of what life looks like for a penguin. Is age 5 young or older for this animal?

A: Humboldt penguins are much further along in their maturity by age 5 than humans are. That’s because the average life span of a Humboldt penguin is around 20 – 25 years in the wild; 25 – 30 years in captivity. Penguins grow incredibly fast. A Humboldt penguin chick at age 40 – 60 days (when it is still on the nest) already weighs as much as its parents—about 7 pounds! At 1 year of age, young penguins lose their juvenile feathers and get in their full adult plumage complete with stripes and spots. They reach reproductive age at 2 – 3 years. 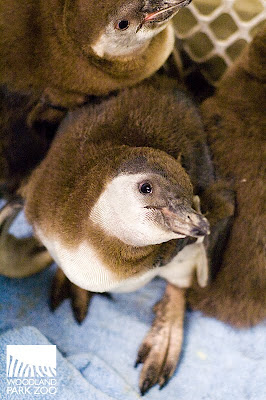 Q: For humans, kindergarten is just starting at age 5. Sometimes we go to school away from our parents and start being independent during the day. When do penguins start becoming independent from their families and how do they learn to do so?

A: Penguins begin to become independent at 70 – 90 days when a fledgling leaves the nest and is no longer dependent on its parents for food. In the wild, penguins typically spend their lifetime in the colony, however, once they are fledged and eating on their own, there is little interaction between parents and chicks. 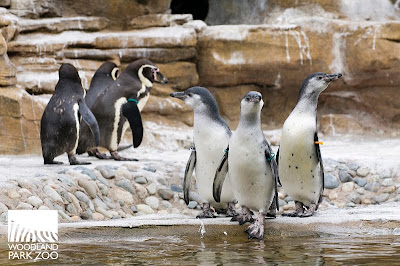 Q: Although we are beginning to be more independent at age 5, we still must be able to tell familiar people from strangers and know where home is. How does a penguin know its family and friends from others?

A: As these birds are a social species and can live in colonies numbering in the hundreds and thousands, penguins use a few methods to identify each other. Humboldt penguins each have a series of spots and stripe patterns on their ventral side and under their flippers. Each pattern is unique to each individual, much like fingerprints on humans. Penguins also use vocalizations to communicate. It is believed that each individual penguin has its own voice unique to itself. This is another way penguin parents can distinguish their young in a crowd and vice versa. 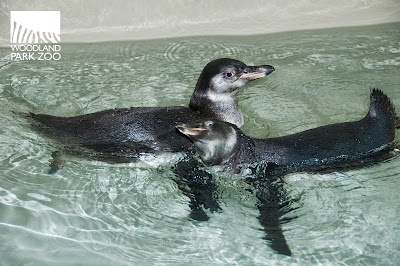 Q: Kindergarten is also a time of learning. We learn our numbers, letters and other useful skills for life (like how to tie our shoes). What kind of skills do penguins need to learn for life and when and how do they begin learning?

A: Upon fledging (at around 70-90 days), Humboldt penguin young are led to the water where parents and members of the colony introduce them to the fundamentals of survival. These fledgling juveniles quickly learn to swim and hunt for fish such as anchovies and sardines. Though swimming and fishing are innate behaviors to penguins, exposure, practice, and repetition of these activities when they are young will be of continuing benefit to the colony as they grow older. The sooner individuals can develop these important skills, the sooner they can participate in foraging and hunting strategies and contribute to the colony. Practice makes perfect! 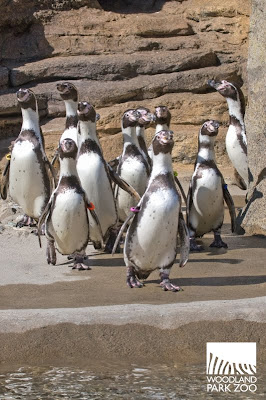 Q: An important step in Kindergarten is learning to share and make friends. How do penguins make friends and interact with each other?

A: Penguins, in general, are highly social creatures that typically live in groups of hundreds and even thousands. A social structure within a group develops over time and often dominant individuals are at the forefront. Competition is the name of the game when it comes to penguin survival. Adapting highly acute senses like eyesight, hearing, touch, and vocalizations (called braying) help penguins to distinguish and express who is friend or foe. Body posturing (using head, flippers, bill), though not easily interpreted by humans, is something penguins seem to use a lot to communicate. Penguins also bill fence when fighting, and a mate will tend to their partner's feathers or preen them when comfortable and relaxed.

Clearly, being 5 means different things for different animals. We’ll explore what it means to be 5 for the snow leopards of Central Asia in the next update. 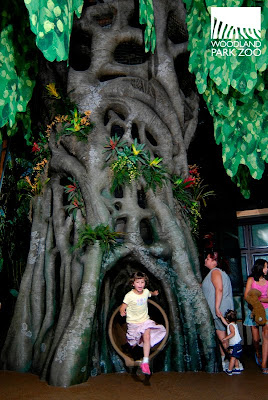 And don’t miss out on celebrating Zoomazium’s 5th with us this weekend! Hope to see you there!

Celine Pardo - Zoo Keeper said…
Did you know that by the age of five, a Humboldt Penguin could have already had six to twelve offspring?! Penguins sure have to grow up fast.
November 7, 2011 at 8:08 AM