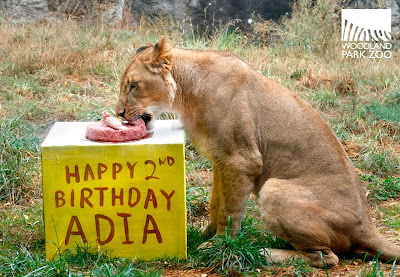 The female South African lion dug into her birthday cake specially prepared by zookeeper Matt Mills: a gourmet round of ground turkey stuffed with a whole raw chicken and topped with a pair of drumstick candles. Since Adia scarfed up every morsel and bone, the cake obviously earned a five-drumstick rating. 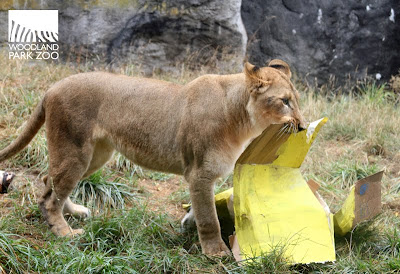 Next, Adia opened her gift box and out rolled a boomer ball, a favorite toy of the 240-pound lion. As kids and families squealed with wonder, Adia put on quite a show “dribbling” the ball throughout the exhibit. She had so much fun that at one moment the ball rolled into the moat filled with water and she dove straight into the water after it! Keep in mind that lions don’t swim and are averse to water. Adia was submerged to her shoulders before realizing she was in the water. She jumped out and, if she had a thought bubble above her head, it would be something like, “Whoa, did I just go into the pool?!” Let’s just say, she made her zookeepers gasp with surprise. The keepers tossed another ball to her and she played with it until, alas, it too landed in the pool. 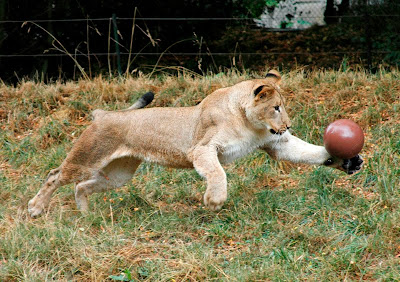 Adia is the newest addition to our family of lions and met the public for the first time at the beginning of this year. She arrived from Columbus Zoo and Aquarium under a breeding recommendation by the Species Survival Plan for African lions. The other lions at the zoo are Hubert and Kalisa, both 12 years old. In about four to eight months, zookeepers will begin the methodical process of introducing her to Hubert. Meanwhile, off exhibit, Adia has visual access to the adult lions on a daily basis. 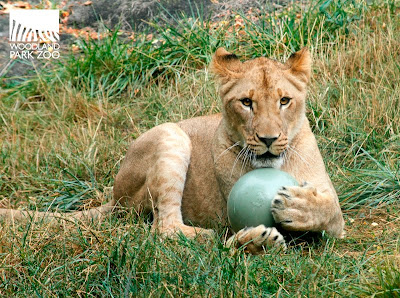 If you’ve ever had the opportunity to see newborn lions, you’ll notice they’re born with spots. As cubs grow, the spots gradually fade away. However, you’ll notice that Adia’s spots are still markedly visible along her rear legs, just like her mama. 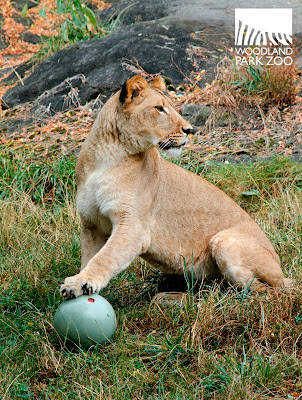 When you come to the zoo, look for Adia on exhibit in the award-winning African Savanna from 9:30 a.m. to 3:00 p.m. on Monday, Tuesday, Thursday and Friday. During other times, you’ll see Hubert and Kalisa. 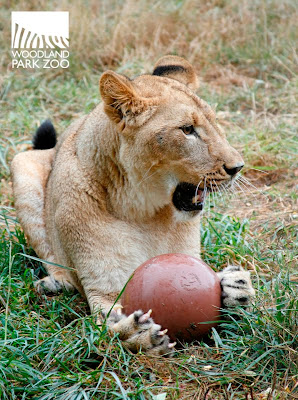 It’s been 20 years since the last birth of lions at Woodland Park Zoo. We have high hopes that the pair will bond and that we’ll soon establish a new pride of lion ambassadors here at the zoo.