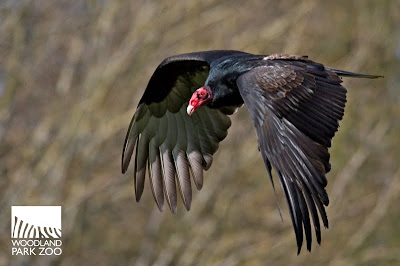 Turkey vulture Modoc in flight at Woodland Park Zoo. Photo by Dennis Dow/Woodland Park Zoo.
Vultures are often depicted as harbingers of death, yet many vulture populations face threats of their own with some species facing extinction. We’re celebrating International Vulture Awareness Day on September 3 to help zoo visitors look past the vultures’ bad reputation and highlight their vital ecological niche as nature’s clean-up crew. 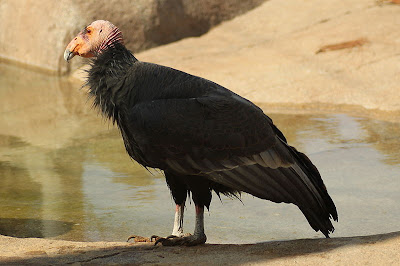 California condor at San Diego Zoo. Photo by Wikimedia Commons user Snowmanradio.
Vultures are scavenging birds that help recycle and prevent the spread of disease. But serving as a clean-up crew by feeding on carrion was partially what led to the California condor (Gymnogyps californianus)—a New World vulture—dipping down to a dismally low population of just 22 birds in the 1980s. The condors were dying from feeding on lead-poisoned carcasses, and poaching and habitat destruction compounded the problem. Zoos came together with a conservation plan in the 1990s to breed and release these birds into the wild, and offer them lead-free carcasses on which they could safely dine. And while condor numbers have bounded back now to a population of at least 399 condors living in California, Arizona, Mexico and in the captive breeding program, vultures around the world continue to face threats. 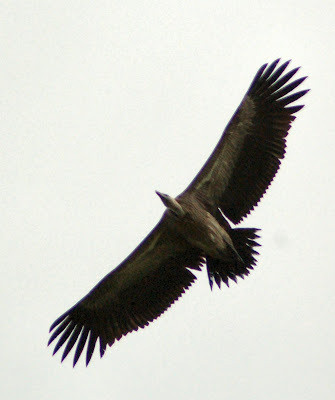 Long-billed vulture. Photo by Ravi Vaidyanathan.
Today three species of vulture in Asia are facing a similarly precipitous decline, this time due to consumption of the drug diclofenac, which was used as an anti-inflammatory in cattle until it was banned in several countries in 2006. Over the previous ten years the Long-billed Vulture, the Slender-billed Vulture and the Oriental White-backed Vulture populations have fallen drastically by 97-99%. 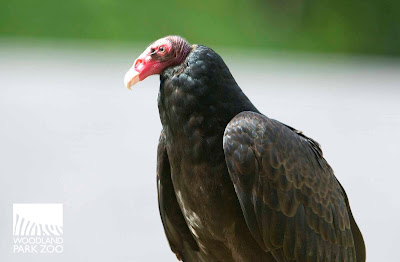 Modoc at Woodland Park Zoo. Photo by Dennis Conner/Woodland Park Zoo.
At Woodland Park Zoo, you’ve probably met our charismatic turkey vulture, Modoc. The turkey vulture ranges from southern Canada to South America. Their numbers declined in the 1950s and 1960s, most likely due to the mistaken belief that they spread diseases. Shooting and poisoned baits often targeted these useful birds. The good news is that populations have increased in recent years, due to more education that has led to less persecution for the birds and safer use of pesticides. 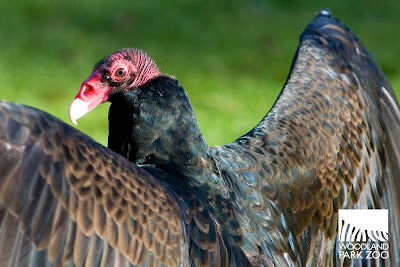 Modoc spreading his wings at the zoo’s Raptor Center. Photo by Mat Hayward/Woodland Park Zoo.
International Vulture Awareness Day is our chance to continue those education efforts and join the worldwide celebration of these misunderstood animals. Come down to the Raptor Center on Sept. 3, 10:30 a.m. – 3:30 p.m. to meet our turkey vulture Modoc and join us for vulture talks, raptor flight programs, bio-facts, storytime and more. See you there!