News from the field: Penguins of Punta San Juan, Part One 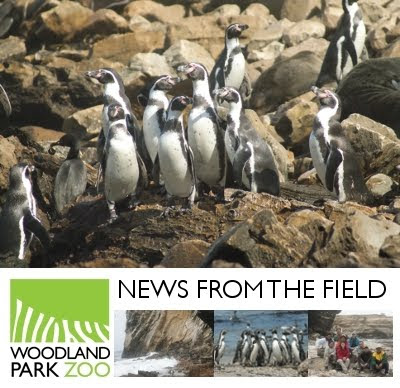 This blog post is part one of a three-part series based on Woodland Park Zoo penguin keeper John Samaras’ work in Punta San Juan, Peru with a zoo conservation partner.

As part of Woodland Park Zoo’s continuing effort in the conservation of Humboldt penguins, I had the opportunity to travel to Punta San Juan in Peru and take part in an annual health assessment of the wild population conducted by zoo professionals and Peruvian biologists. Woodland Park Zoo’s penguin exhibit, which opened in May 2009, replicates the coast of Punta San Juan, a barren desert peninsula that juts out into the South Pacific in southern Peru. Because of its proximity to the Humboldt current (a cold water current from Antarctica rich in fish and prey species) there is an amazing abundance of life on the rocky coast. Hundreds of thousands of seabirds and tens of thousands of fur seals and sea lions, as well as a large concentration of Humboldt penguins, call this place home. 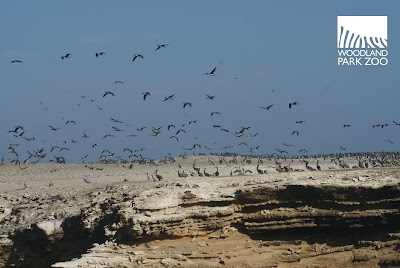 There are only an estimated ten- to twelve-thousand Humboldt penguins left in Peru, with historic numbers being hundreds of thousands. Years of intrusive guano harvests and overfishing of anchovies (the Humboldts’ main prey) have led to their decline. Years ago, a wall was built that blocked off the whole peninsula in an effort to protect the guano reserve and later, to help rebuild the devastated bird populations. The wall in front of our penguin exhibit replicates the real wall that helps protect Punta San Juan. 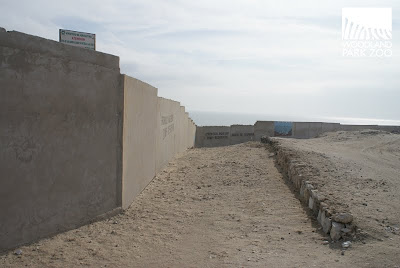 Due to the endangered status of the species, several zoos accredited by the Association of Zoos & Aquariums, including WPZ, support efforts to research, conserve and protect Humboldt penguins in zoos and in their native habitat. For years, zoo professionals have taken part in monitoring birds during guano harvests, the annual population census, and health assessments. The census is done in mid-summer when the birds are molting. I went down for the health assessment, which was in early June—when penguins are nesting and therefore easier to catch in their burrows. This is the first of a series of three blog entries describing my experiences at Punta San Juan and the work we did with the penguins.

From Seattle to Punta San Juan

After meeting up in Lima with the veterinarians, another zookeeper, researchers and students who would be joining me in the field, we embarked on the seven-hour drive through the desert coast of Peru, south to Punta San Juan. The landscape was a barren desert with the ocean to the east and desert mountains to the west. There were no plants except when we drove through the valleys, where farmers had used irrigation to grow crops.

It was dark when we arrived in Marcona, a small town just outside of the reserve. We drove through the town, across a stretch of desert and up to the large gates of the wall. Franco and Paulo, two biologists who worked at the reserve, were there to open the gates. After a long journey we had finally arrived. 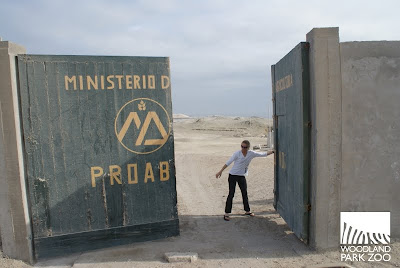 We stayed in a rustic building that had housed the managers of the guano harvest workers decades ago. There was no electricity there, so a headlamp was a must. The building sat on the edge of a cliff, and you could hear and see the waves crashing in far below. Although it was nighttime, the desert peninsula, which was just to the south of us, almost glowed in the dark from the white guano. There was a strong wind coming in off the coast and you could hear sea lions vocalizing in the background. 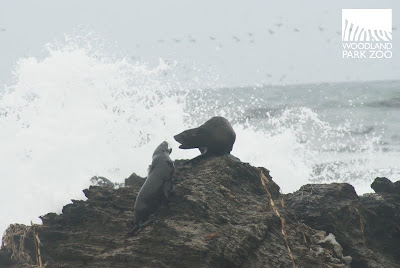 The sun revealed an amazing scene the next morning. The vast blue ocean pulsed with white waves that came crashing violently into the jagged rocks below. Huge rock formations stuck out of the sea like ancient monoliths. The beach was sandy, with several fur seals sprawled out basking in the morning sun and the sky was dotted with birds flying around in all directions. 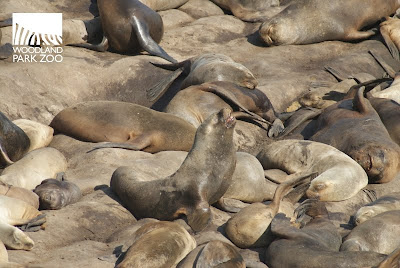 We all gathered for breakfast and afterwards, gathered our equipment. Once we got our gear together, we were off to catch penguins! As we walked along through the desert towards our destination on the coast, it almost felt like I was walking on the surface of the moon. The ground was arid and littered with cormorant nests that looked like small craters. 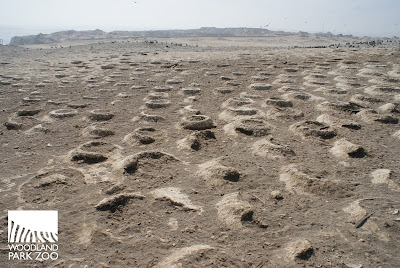 As I approached the edge of the cliff and looked down at the spectacular scene before me, the abundance of life was breathtaking. A few hundred meters to the south, the desert was blackened with over 500,000 Guanay cormorants, with a constant stream of the birds taking off and heading north across the sea in search of their aquatic prey. Thousands of Inca terns, Peruvian boobies and pelicans, Belcher’s gulls and turkey vultures filled the sky and populated the rocky cliffs. 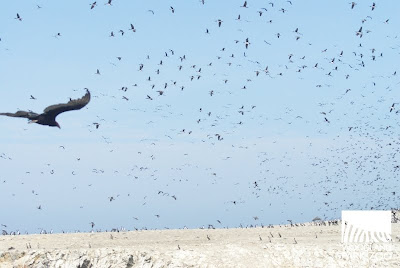 Covering every square inch of some beaches were thousands of South American sea lions. Another beach was blanketed with female fur seals and their recently-born pups. This beach was a nursery, where the young seals could be safely raised away from testosterone-fueled adult males. In and amongst all of this were the Humboldt penguins, standing on the beach below, drifting in with the waves and swimming in the turbulent surf. 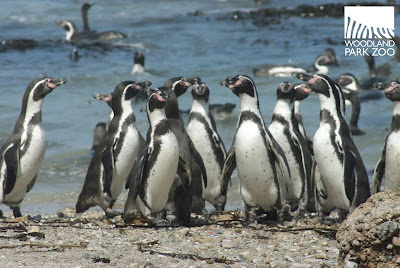 One penguin caught my eye as he maneuvered from rock to rock through the piles of lazy, sometimes grumpy, sea lions as he tried to make it back to his burrow. This would be the first of many Humboldt penguins that I encountered there while on my trip. In the next installment of this series, I will describe the actual field work that we did there, step one being “catch ‘em up!” Stay tuned!