As we celebrated 20 years of native turtle conservation last week, it was only appropriate that we release 20 western pond turtles into protected habitat in our continued efforts to rebuild a stable population of this state endangered species. 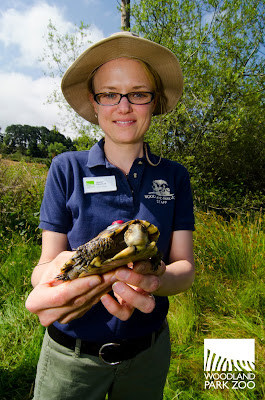 The 20 turtles were collected from the wild as eggs last year, hatched and head started at Woodland Park Zoo to improve their chance of survival in the wild. Once the turtles reach a suitable size of about 2 ounces—large enough to escape the mouths of bullfrogs and large-mouth bass—they are returned to their homes and closely monitored by biologists. 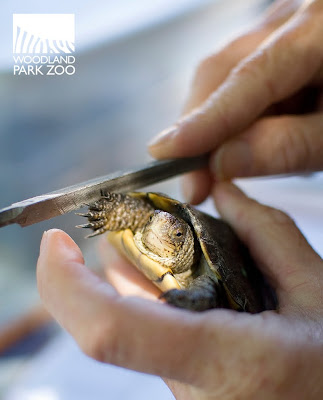 Before they could be released, the turtles underwent final prep work that included measuring, weighing and notching shells (shown above) for identification. 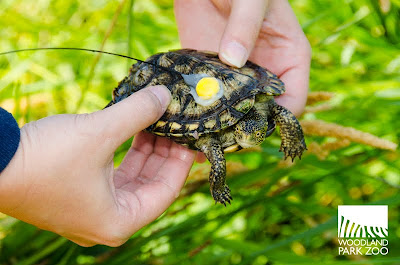 The largest of the 10-month-old turtles were equipped with tiny radio transmitters glued to their shells so biologists can learn more about post-release dispersal, habitat use during active and hibernation periods and, ultimately, their survival rate. 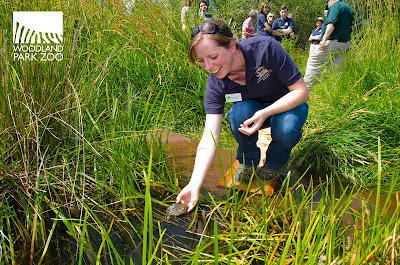 Western pond turtles were once common from Baja California to Puget Sound, including the Columbia River Gorge. However, loss of habitat, disease and predation by non-native species such as bullfrogs decimated their numbers. Habitat degradation and disease were, and still are, problems, but the biggest threat to fragile baby turtles is the bullfrog, native to areas east of the Rockies. 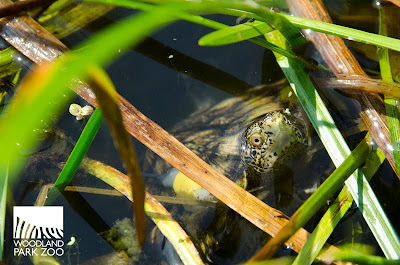 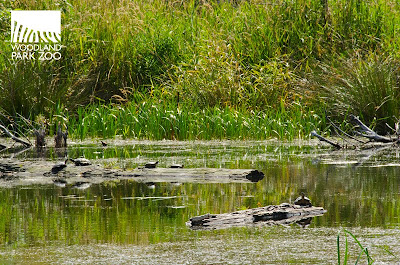 Thanks to the long-term, collaborative effort among Woodland Park Zoo, Oregon Zoo, Washington Department of Fish and Wildlife, and the U.S. Fish and Wildlife Service, the population has been restored from a low of 150 in 1990 to about 1,500 individuals currently surviving in the state.

We’re proud to play a role in bringing this species back from the brink of extinction and we’re committed to working with the communities around us to conserve the wildlife and wild places in our own Pacific Northwest backyard.