Then and Now: Monkey Island


For long-time Seattle residents, you have probably experienced first hand the difference between Woodland Park Zoo seen on the left approximately 50 years ago and today’s zoo seen on the right.

The side-by-side comparison above shows how profoundly different a type of exhibit the old Monkey Island (seen here circa the mid 1960s) on the left is from the same space after major modifications that now makes up the lemur exhibit—part of our Tropical Rain Forest—seen on the right. 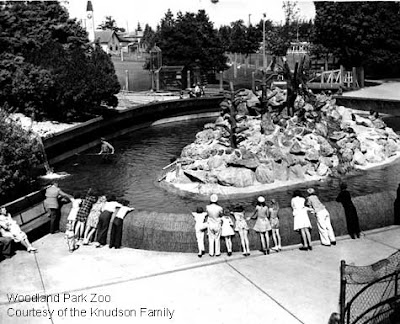 Monkey Island was a Works Progress Administration (WPA) project completed in the early 1940s. It housed several different species of monkeys over the years and old-timers might recall the bright yellow schoolhouse that perched at the summit of the faux rock, complete with a bell that the monkeys would ring. As zoos evolved into organizations that actively championed environmental causes, exhibits such as this began to be replaced with exhibits much more evocative of the habitats to which the animals were native. This approach not only provided a much more enriched environment for the animals to frolic in and enhance their natural behaviors, it also helped to educate and connect visitors to real-life, far-flung locales that the animals depended upon for survival. Dubbed "naturalistic immersion" the goal was to create exhibits that were location-based and provide a sense of belonging instead of the sterile cages that formerly meant "zoo" to the public. 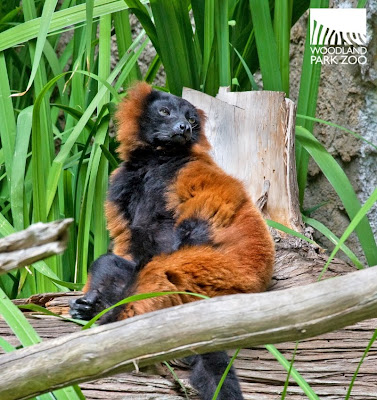 In contrast, Lemur Island today is as lush and verdant, even at this early spring time of year, as Monkey Island was stark and sterile. It's much easier to imagine lemurs above you in the trees of Madagascar now when you walk through this area than one could conjure up any sort of habitat for the monkeys that inhabited Monkey Island.
For a look back at more of Woodland Park Zoo’s 112-year history, don’t miss the history section of our website.
Photos: Then and Now photos by Woodland Park Zoo, Monkey Island courtesy of Knudson Family, Lemur by Dennis Dow/Woodland Park Zoo.

Anonymous said…
I know this is an old post, but I would LOVE to see some more pictures from the zoo during this era.
October 21, 2014 at 6:48 PM