Maybe it is just coincidence that “aguila” means “eagle” in Spanish, but when a Steller’s sea eagle from Woodland Park Zoo needed specialized surgery for a fractured bone, Dr. Alexander Aguila of the Animal Surgical Clinic of Seattle was ready! 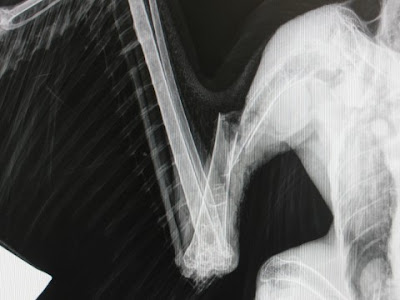 On March 23rd, Dr. Darin Collins, Woodland Park Zoo Director of Animal Health, contacted the surgeons at Animal Surgical Clinic of Seattle regarding a potential fracture repair on the right wing of a Steller’s sea eagle named Natasha. Exhibited in the award-winning Northern Trail exhibit at the zoo, Natasha is the female of a breeding pair acquired in 2010. Steller’s sea eagles are among the largest and heaviest of the raptor family, and Natasha weighs in at 13 pounds with a wing-span of over 6 feet! 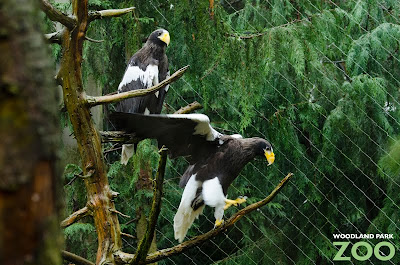 On the morning of March 22, Natasha (pictured in the background above) was found on the ground of her zoo enclosure. She appeared to be having difficulty maintaining her balance and was holding her wing lower than normal. Zookeepers quickly alerted the zoo’s veterinary staff of their observations, and preparations were made for a physical examination. 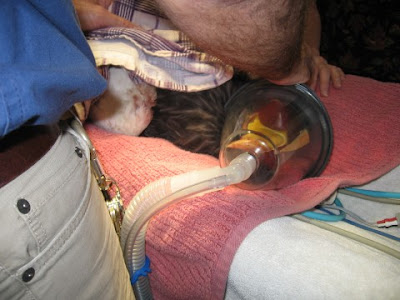 Natasha had come to Woodland Park Zoo with an existing right wing abnormality from a previous injury sustained several years ago, and had been living quite successfully with her disability. She was navigating her zoo enclosure with minimal difficulty given her limited flight capability and mostly moved from branch to branch with short flights. Speculation was that this new injury could have been the result of Natasha falling from a higher branch. 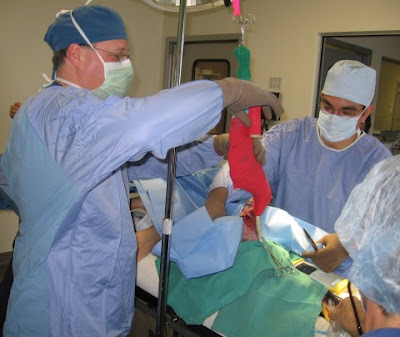 After examining the eagle and taking X-ray films at the zoo’s Animal Health Complex, Dr. Collins determined that she had fractured her humerus (equivalent to the human upper arm bone) and would require specialized surgery. Natasha was given fluids and pain medications and stabilized overnight while appropriate preparations were made to transport her to Animal Surgical Clinic of Seattle. 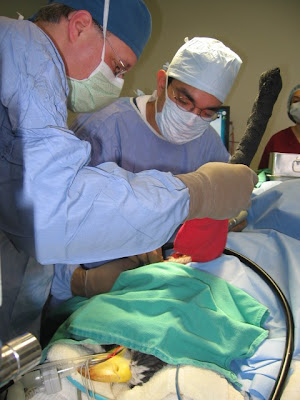 Upon receiving the news of the injury, ASCS board-certified surgeon Dr. Alexander Aguila swung into action. He and Dr. Collins collaborated with Dr. Ricardo de Matos, an avian specialist at the Cornell University College of Veterinary Medicine, to form a plan of action that involved placing an external fixator system to stabilize the fracture during the healing period. 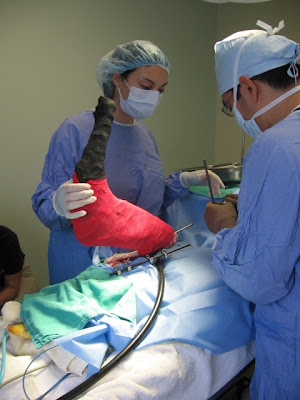 Thanks to the knowledgeable zoo staff, Natasha’s transport to ASCS and her subsequent anesthesia went very smoothly. Zoo and ASCS veterinary technicians worked side-by-side to place a breathing tube and IV catheter, as well as probes for monitoring vital signs. The surgical site was cleaned and Natasha was moved into the OR for her procedure. 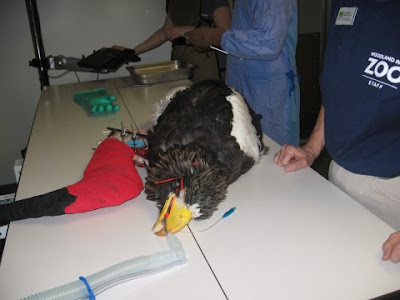 Dr. Aguila worked alongside another ASCS board-certified surgeon, Dr. Russell Bennett, to place the external fixator, with the help of surgical assistant, Dr. Cristina Flamini. Anesthesia and vital signs were monitored constantly by Dr. Collins, and in just over an hour, the surgery was complete. Post-op X-ray films showed good positioning of the fixator and Natasha was removed from anesthesia. After placing a leather hood over her eyes and wrapping her securely, zoo staff transported her back to their Animal Health Complex, where her recovery continued uneventfully. 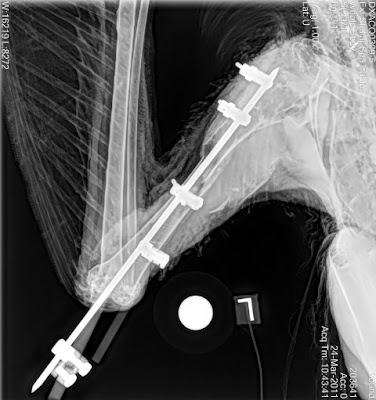 Natasha is doing very well now and her open wounds are beginning to close. Recheck X-rays are due at three weeks post-op to verify progress of healing, and again at six weeks to ensure completion of healing before removing the external fixator. The zoo vet and keeper staff members are keeping a close eye on her, and we expect an excellent outcome!

Thanks to the collaborative efforts between Woodland Park Zoo and Animal Surgical Clinic of Seattle, zoo-goers can continue to be inspired by this majestic conservation ambassador for the Steller’s sea eagle species.

Leslie Ritter said…
Woodland Park Zoo is an amazing steward of the animal in its care. It is able to call on really impressive resources like all the doctors involved in repairing this eagle's broken wing. I'm honored and proud to say that I'm a docent at the Woodland Park Zoo.
May 17, 2011 at 7:34 AM