News from the field: A magnificent bird


Raptor Ecology of the Shrub-Steppe, a Woodland Park Zoo Partner for Wildlife, is a project of the Washington Department of Fish and Wildlife to identify, track and study native raptors and their conservation threats. This is an update from the field... 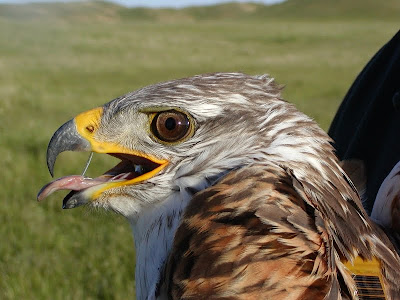 The 2011 field season for Raptor Ecology of the Shrub-Steppe is just beginning, but it is a good time to reflect on the past season and the fresh outlook a new spring will bring. Many raptors will be returning to their nests after a long-winter, rejuvenated and prepared to start the nesting cycle again. Sadly, some raptors won’t return to their nests this spring as they may have in previous years, not having survived the challenges created by humans and natural hazards in their environments.

I’d like to relate a short story that honors the contribution of a particular ferruginous hawk to our research and illustrates how difficult survival is for these birds. In 2006, as part of our migration ecology research, I worked with Dan Svingen, USFS biologist on the Dakota Prairie Grasslands, to capture and satellite-telemeter an adult male ferruginous hawk #47839 in the very southwestern corner of the state. The bird (pictured above) was a particularly vocal and aggressive male we dubbed “Charlie” after we captured and released him. In the next five years Charlie provided more than 17,000 satellite locations and four complete seasons of migration monitoring. Charlie nested and produced young every year, providing for his family through a steady diet consisting primarily of small mammals. Ferruginous hawks are historically known as squirrel hawks. 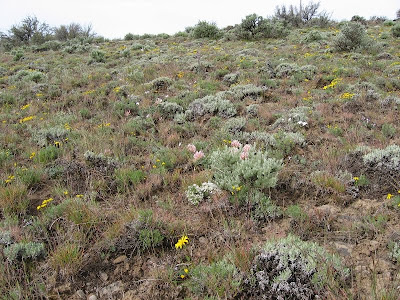 Early last year Charlie was perched on the north part of his range and when I checked his satellite locations he was not moving. I asked a biologist from North Dakota to check the location and she recovered his carcass. He had been shot in the shoulder, lived a couple days but then died. Unfortunately, there is still a problem in some places, including the Dakotas, of shooting raptors. In the Dakotas such poaching is from the belief that it protects pheasants, a prized game bird. But the reality is that ferruginous hawks don't feed on pheasants—they do eat small mammals (primarily squirrels, rabbits and pocket gophers) though, which actually makes them friends of the farmers.

This was a sad ending to a magnificent bird, but I relate the story to illustrate our need to understand shrub-steppe raptor mortality factors and survival, and to emphasize the importance of educating those without an understanding of raptors’ place in the shrub-steppe ecosystem. The ferruginous hawk is a species at risk and declining in North Dakota. The better we understand its range, its behavior and the risk factors out there, the better we can protect it.

Caitlin said…
We have a red-tailed hawk named Charlie in the raptor club at WSU. He has blessed the program with 30 YEARS of being an educational tool for the community. I just hope that his teaching and that of all our other birds will bring longer lives to their brethren on the outside by preventing sad events like this.
April 22, 2011 at 11:32 AM