That’s not an alien poking a snaky arm out of wallaroo Fergie’s pouch, but the naked tail of her young joey. 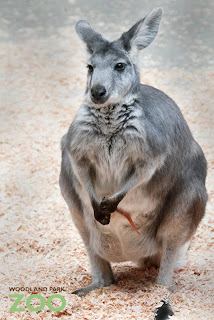 Young wallaroos, a type of small kangaroo from Australia, are born weighing less than a gram and roughly the size of a bean. The blind, hairless babies make the long trek after birth into the mother’s pouch where they suckle and develop over several months. 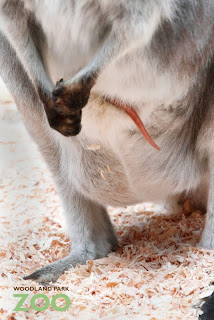 Fergie’s joey, born September 14th, currently weighs somewhere in the range of 500-1,000 grams and at a little over 6 months old, is only just beginning to be seen sticking arms, legs or, in this case, its tail, outside mom’s pouch. By around 7 months, the joey will emerge from the pouched, fully furred but remaining close to mom for another 3-4 months—about late June or early July for this joey. The gender of the joey isn't yet known.

Fergie is on exhibit in our Australasia exhibit. The best chance to get a glimpse of the joey is when Fergie is cleaning her pouch, even though zoo visitors can see the joey moving about inside the pouch. Fergie generally spends her time in the indoor portion of the exhibit unless it’s a nice, sunny day. Look for the green tag in her right ear.

Anonymous said…
We saw her joey today. We thought she became fat before knowing about the baby. Many people thought the joey was something else today, so we hope the Zoo will put a sign up about the joey.
February 19, 2011 at 7:19 PM

There is actually a sign up about the joey. It's on the railing closer to the windows. It has a bit of info on there about what to look for and the timing of development for the joey.
February 22, 2011 at 9:45 AM