An officer, a zookeeper and a dog go Bear Smart


I have a passion for educating people on ways to prevent human-bear conflicts so that bears do not die needlessly because of human caused problems. Since 2006, I have worked as a field assistant for the Grizzly Bear Outreach Project (GBOP), a Woodland Park Zoo Partner for Wildlife. In 2010, I had the privilege to expand my work in the field, joining with Washington Department of Fish & Wildlife’s Enforcement Officer Nicholas Jorg in the Skykomish Valley to establish the Sky Valley Bear Smart Project, focusing on educating the public in the Gold Bar and Sultan communities on how to be Bear Smart.

One of the most rewarding and thrilling experiences in my new position came last summer when I helped Officer Jorg handle a female bear that was roaming campgrounds in Monroe. The bear was drawn in by the temptation of food left out by a young group of campers. 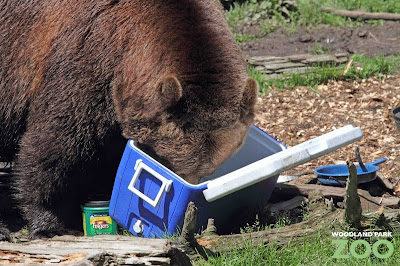 (Example of what happens when a bear finds an unsafe campsite. Photo from Woodland Park Zoo’s annual Bear Affair education and conservation event)

We darted the bear which caused her to take off running. But we had a powerful tool to help recover her—Colter, a Karelian bear dog. Karelian dogs are playing an increasingly important role in reducing human-bear conflicts. They are a unique, non-lethal wildlife management tool to deter and repel bears, reducing the number that have to be lethally removed. 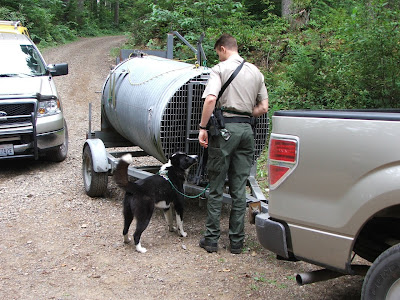 Soon, Colter found the bear anesthetized in the brush. She was carried out of the area and placed in a culvert trap and processed. What does that entail? Her condition was evaluated, teeth checked, a tag was put in her ear for monitoring purposes, and notes were taken on the process.

When the bear recovered from the anesthetic, the door to the trap was opened. As the bear ran from the trap, Officer Jorg helped her along with a bean bag shot to her rump, which stings but does not cause damage, and Colter finished the job by chasing her back into the forest.

Thankfully the bear did not have to be lethally removed, but to help prevent future issues, Officer Jorg and I talked with the campers, answered their many questions, and shared information about how to co-exist safely with bears. Before your next camping trip, it’s a good idea to refresh your memory on all the Bear Smart tips and what to do if you encounter a bear, available on the Grizzly Bear Outreach Project website. Or you can get a first hand look at how dangerous an unsafe campsite can be at our annual Bear Affair event, planned for June 4 this year.

The Washington Department of Fish & Wildlife fields hundreds of calls each year when bears get into garbage and bird feeders, or break into cars and houses in search of food. Unfortunately, they do not always have time to respond to every call; hence, GBOP’s collaborative partnership in educating the public and talking to community members has been hugely beneficial both to the agency and the public.

Working with Officer Jorg in the Skykomish Valley on similar goals keeps me motivated and inspires me to do more in the region to reduce human-bear conflicts.

Want to help support Woodland Park Zoo and our conservation partners in the Pacific Northwest? Text WPZ to 20222 to donate $5 to the zoo today. Messaging and data rates may apply. For details visit www.zoo.org/text2give.