This conservation update comes from the Snow Leopard Trust, a Woodland Park Zoo Partner for Wildlife working to study and conserve wild populations of the endangered snow leopard. Their field research, based in Mongolia, includes camera monitoring and GPS collaring of wild snow leopards in order to better understand the range and behavior of this elusive species. The more we know about snow leopards, the better we can protect them…

As we come to the end of our 2010 field season, we are pleased to close the year with two wonderful stories.

The first is about Tsagaan, who has been out of contact since March 2010! This fall, our team caught up with Tsagaan, a large adult male cat we have been following for two years. Although re-collared in March 2010, his collar never switched on and we received no GPS locations over the last eight months. Within weeks of placing this new collar in September, we received some astounding information. Simultaneous uplinks separated by just about 16 meters indicate that Tsagaan shared a cluster of GIS locations with Khashaa (a female in the study), and it is likely that they may have shared a meal! Could it be snow leopard romance? 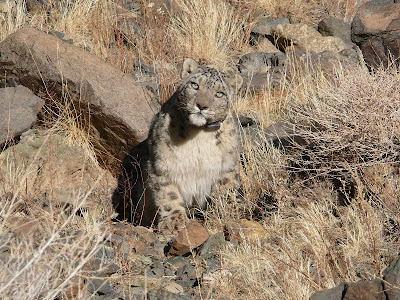 The other astounding news is that in October we placed a collar on a female snow leopard we named Tenger, meaning Sky Spirit. We believe that Tenger, who is a larger and older snow leopard, is the mother of Zaraa, who is notably both younger and smaller. We’ve seen them together in remote sensor camera images, and now we can watch as they move and hunt together!

We’re excited to see these snow leopard sagas in the South Gobi unfold and we believe it will yield unprecedented data on snow leopard social interactions; dispersal of young from their mothers; differences in male and female movement patterns, and much more.

Thank you to Woodland Park Zoo for their generous support, and to our partners Panthera Foundation and Snow Leopard Conservation Fund, Mongolia.

Want to help support Woodland Park Zoo and our global and local conservation efforts? Text WPZ to 20222 to donate $5 to the zoo today. Messaging and data rates may apply. For details visit www.zoo.org/text2give.