Chai (rhymes with eye), our female Asian elephant, doesn't yet have the fame of the late Paul the World Cup-predicting octopus. But today she prognosticated the winner of the Apple Cup. Presented with two boxes of apples, one decorated with Dawg and the other in Coug-themed wrapping paper. The 31-year-old elephant used her trunk to snatch an apple from the purple and gold box, picking the winner with a firm bite. Then, as you can see in the video, promptly smashed the box with the Coug paper. 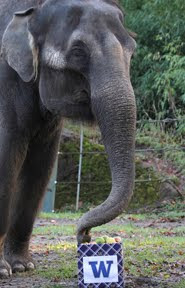 Woodland Park Zoo has had its own legion of fans in the region by a mere year longer than the first Apple Cup game played in 1900. But today marks the first time an animal here has "predicted" a winner in this heated rivalry. Pat Maluy, the lead elephant keeper joked that "Since Chai has never done this before, her record of forecasting the winner is perfect. But I guess we'll know after Saturday's game if she has an pre-cognitive ability when it comes to football."

But never fear die-hard Cougs fans, you still get your props. Today's pachyderm prediction is part of the zoo's special Apple Cup admission discount where anyone wearing Husky---or Coug---garb gets half-off zoo admission through December 5. It can be a jersey, hat, gloves, scarf or gloves. It's your choice. Or show a valid student ID from either school.

(This admission discount applies only to the child or adult wearing the university sportswear and cannot be combined with other discounts or promotions. Good through December 5, 2010.)