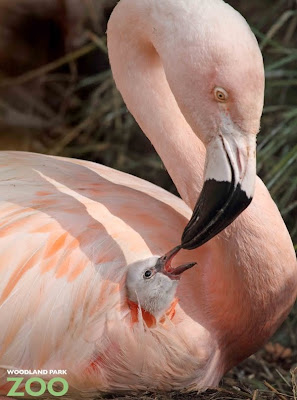 Stop by the flamingo exhibit and you’ll notice two small, white puffs emerging among all those pink feathers. That’s because two Chilean flamingo chicks hatched at the start of October, and are being cared for now by their parents out in the flamingo exhibit.

This is the first time that our colony of flamingos is raising chicks on exhibit. Last year, the flock produced three chicks which were hand-raised by the zoo’s team of expert staff before being introduced to the colony. The flock decided to breed a bit late in the year, but the chicks are well insulated and should have no problems with acclimating to colder temperatures. Chilean flamingos typically breed at very high altitudes in the Andes. 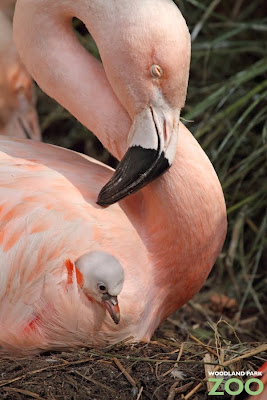 So far, the parents are doing a great job of caring for their young. With flamingos, both parents care for their chick, feeding them “crop milk,” a dark red secretion produced in the upper digestive tract. The substance is nutritionally similar to milk that is produced by mammals.

The chicks leave their nest about three to five days after hatching but remain in close proximity to their parents for feedings and brooding. 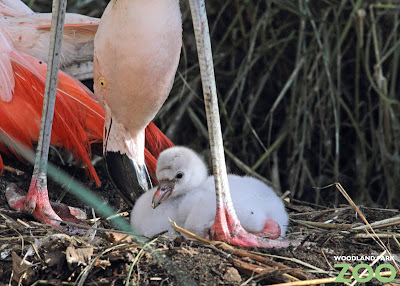 Flamingo chicks hatch with a whitish, gray down and can acquire extensive pink feathering that can be mixed with gray-brown contour feathers at about 1 year of age. Juveniles usually have full pink feathering by 2 to 3 years of age.

We’ll be watching the parents and these chicks closely to make sure the chicks remain in good health as they grow. Three more eggs are expected to hatch later in the month, so more chicks could be on the way.

Merry said…
It will be interesting to watch these chicks develop and to note at what age each one's gray feathers turn to pink and at what age each one starts to develop the characteristic curved beak. I wonder if there is as much variation in rate of development as there is in other species (like humans), or if they all tend to develop at about the same rate.
October 13, 2010 at 10:38 AM

AKnox said…
Real great post, thanks for the heads up. I went out to the zoo today and managed to get some great photos of the chicks. I am one of the candidates for the zoo's photography division.

Anonymous said…
Aww, I'd love to know if the chicks matured into healthy adult flamingos! They are so cute/goofy with that big noodle neck...the baby's all squat though! I wonder when he'll develop his long noodle-y neck?
May 29, 2012 at 7:54 AM