September 17, 2010
Posted by Ric Brewer, Communications
For the fifth time in our history, Woodland Park Zoo has been honored with an Exhibit Achievement Award by the Association of Zoos & Aquariums (AZA) for our Humboldt penguin exhibit. The prestigious award, equivalent to an "Oscar" in the zoo and aquarium world, was presented this week at AZA's annual conference in Houston. 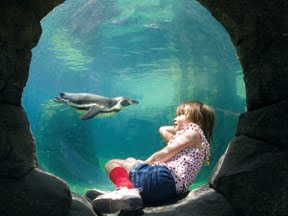 In a rare move by AZA, the top award also went to a second institution, Oregon Zoo, for its Predators of the Serengeti. The achievement award is presented by AZA for outstanding dedication to conservation issues, construction of exhibit space and simulation of species natural habitats.

The state-of-the-art penguin exhibit, opened in May 2009, transports zoo-visitors to the rocky coastal peninsula of Punta San Juan, home to the largest breeding population of Humboldt penguins in Peru. There are many factors used to determine "best exhibit" status, but the many energy-efficient and "green" elements were key. The exhibit uses geothermal energy to heat and cool the water in the pool, and an innovative filtration system utilizing a constructed wetland to filter water, saves three million gallons of water and nearly 22,000 kilowatts of energy per year. It also avoids run-off into the city's storm drain system and pollution of Puget Sound.
Everyone at the zoo would like to thank the public and private support provided by more than 550 donors, including the King County Park Levy, community fundraising campaigns, The Hugh and Jane Ferguson Foundation, Bill & Melinda Gates Foundation, Bank of America Charitable Foundation, Seattle City Light and Seattle Public Utilities.
Photo by Jennifer Svane