The newest species to join our Tropical Rain Forest dome, the bananaquit, is not rare in the wild, but this oddly named bird is certainly unique due to the fact that many scientists still disagree about exactly which taxonomic group it belongs. 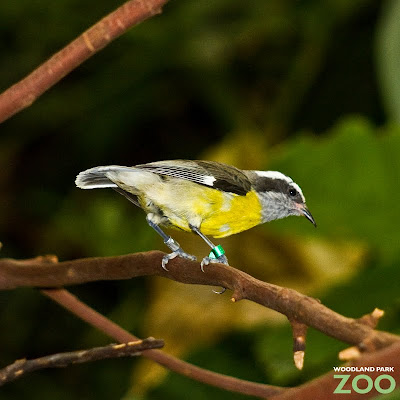 The bananaquit (Coereba flaveola) is a species of passerine bird (the order of birds which contains nearly half of all bird species ranging from warblers to crows and sparrows). It features a brilliant bright yellow breast with a dark gray-to-black top and horizontal white stripes above and below its dark eye. Its beak is slightly curved and awl-like.

It is tentatively placed in the tanager family, but classified as incertae sedis by other authorities (such as the American Ornithologists' Union) as its affinity to other species is uncertain. This fancy Latin term basically means, "We don't know for sure." While its classification is debated, it is often placed in its own family, Coerebidae. Some birders describe it as a "miniature great kiskadee" and it is known for its tireless, high-pitched tsri song. 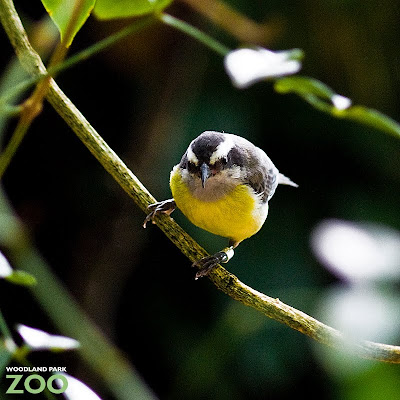 Bananaquit inhabit a wide range of open to semi-open habitats and are commonly seen in backyards, gardens, parks and other areas of human habitation in tropical South America, north to southern Mexico and the Caribbean. It is found throughout the West Indies, except Cuba. Birds from the Bahamas are rare visitors to Florida. More than two-thirds of the bananaquit diet consists of nectar which they obtain by piercing the calyx of flowers (the structure that protects the bloom before it appears). This hole will enlarge to allow other birds, such as hummingbirds, and insects to reach the nectar more easily.