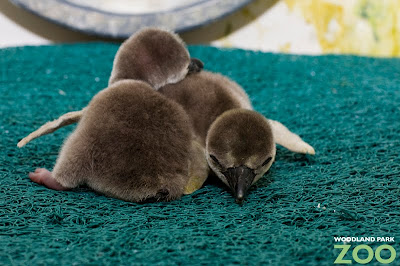 With five chicks hatched in April, we were thrilled with the breeding success of our endangered Humboldt penguin colony in just the first year of their new exhibit. Well, now there’s even more to cheer. Two more penguins just hatched at the start of August!

The keepers regularly weigh the chicks to ensure they are achieving acceptable weight gains. At the weigh-in today, the 12-day-old chick came in at just over 1 lb and the 9-day-old chick at 0.6 lb. They looked healthy and it seems their parents, 18-year-old mother Cujo and 20-year-old father Oedipus, are properly caring for them in their off-exhibit nesting burrow. 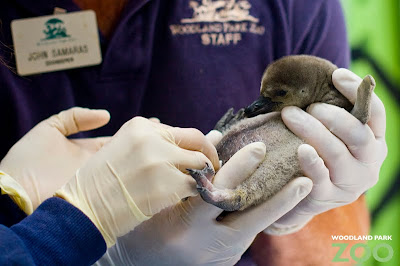 The parents are among the oldest penguins in the zoo’s colony and also the most genetically valued breeding pair at the zoo. As part of our work in the Species Survival Plan for the endangered Humboldt penguins, ensuring such genetic diversity is critical to the stability of the population. 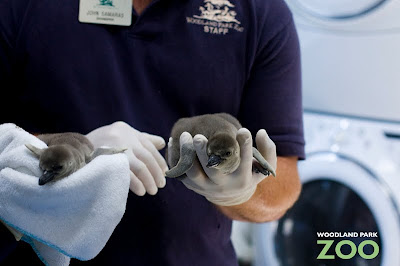 The two chicks will stay under the care of their parents for a while longer, and then will start their swim practice and food training with their keepers behind the scenes. The keepers will train the birds to approach staff for hand feeding and to allow close-up visual inspections. 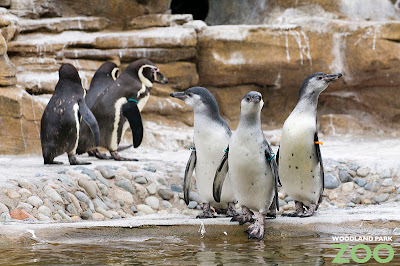 This is the first nesting and breeding season for our colony of Humboldt penguins since the exhibit opened last May. The five older chicks—including Pisco, the chick named by our Facebook fans—joined the adult penguins on exhibit in early July. You can tell them apart by their lighter, more grayish feathers. It will be several weeks before the two youngest chicks are ready to join the colony in the exhibit.

Anonymous said…
omg post as soon as we can see them I HAVE TO see them in person while there still babies
September 11, 2010 at 11:56 AM