August 25, 2010
The Louisiana Pine Snake Species Survival Plan is one of more than 30 field conservation projects in 50 countries around the world supported by Woodland Park Zoo. Here is an update from the field by one of the conservationists working to return Louisiana pine snakes to the wild… 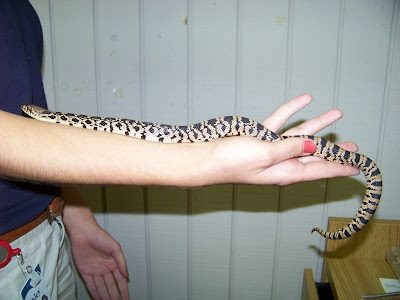 Repatriating the Louisiana pine snake to the eastern portion of its historic range, 50 years after its extirpation, progressed further this August with the release of three more hatchlings. These are especially important snakes because they are carrying externally attached radio transmitters which will allow us to keep tabs on them, at least for a short while, and thereby learn a little about how they are adapting to their environment. 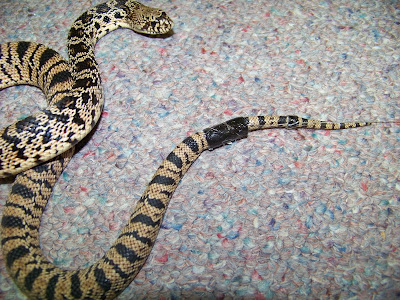 Early in the morning, I met staff biologists and rangers who work in the Catahoula District of Kisatchie National Forest, which is where our reintroduction is taking place. The potential significance of the day’s simple task, turning three little snakes loose in a remote tract of piney woods, was not lost on any of us, and the Forest Service had sent photographers to document the moment. Some of the rangers who had been working in the area for a long time recollected back to their predecessors, all the way back to the CCC workers of the Great Depression years, who began the restoration process of these woods with the planting of longleaf pine trees to mend the complete razing of the original forests the decade prior, during a time when forests were seen simply as stores of natural wealth to be harvested. We thought these men, most of whom are surely deceased and whose names were never noted, would love to see how their labors had been the foundation that had made today’s event possible. 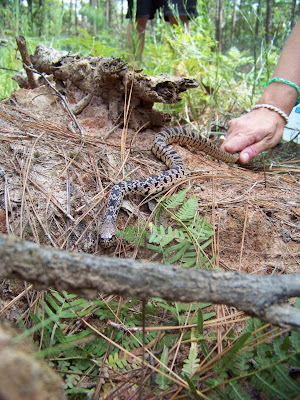 We departed the Ranger Station and headed out to the release site, trying to beat the ever higher and hotter sun that would soon heat these piney woods to near 100 degrees. The actual release seemed an anticlimax – we simply guided each hatchling down a hole created by an uprooted pine tree that had been toppled by a storm. That was it. But many more snakes will be following these over the next few years, and walking back to the truck, I couldn’t help but think that maybe one day 10, 20, or 30 years from now, biologists would be trapping adult pine snakes that, through DNA fingerprinting, would prove to be the offspring of these first pioneers.

Over the next few weeks, rangers will be tracking these snakes, and each time one is relocated, the data we gather will tell us a little more about how these zoo-bred snakes are adjusting to their new home.