The endangered snow leopard is elusive and hard to study in the wild. So researchers with the Snow Leopard Trust, a Woodland Park Zoo conservation partner, are testing with us a new method of luring these felines to research sites—Calvin Klein Obsession for Men. 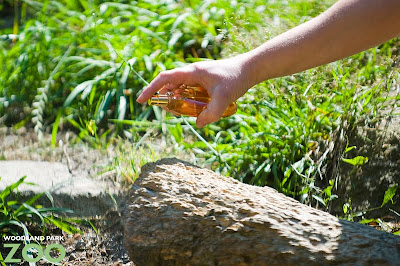 Today, we tested the appeal of the cologne on our 1-year-old cubs Gobi and Batu, and their mom Helen. We installed a camera in the snow leopard exhibit and sprayed the cologne around the area of the camera in hopes of capturing stop-action images and measuring the reaction of the cats to the lavender, spice and woody elements of the cologne. 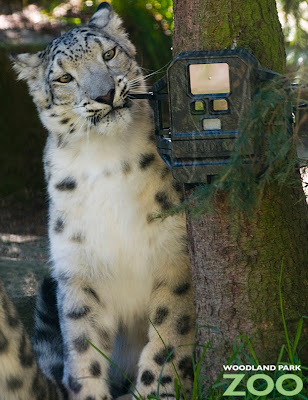 The results? Well, we wouldn’t quite call it an obsession, but the cats are definitely interested in Obsession. The cologne proved to be a strong attractant…eventually. It just took the cats several minutes before they caught the scent and became interested in it, rubbing up to the areas where the scent was splashed. 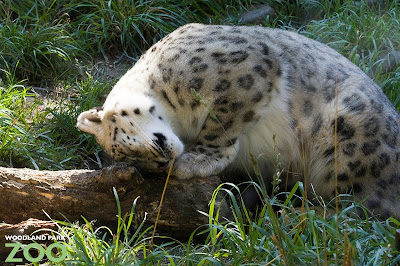 The novelty of the camera in their exhibit also proved quite stimulating, and the cats spent a good amount of time biting and clawing at the camera. Here's a series of photos taken by the camera in the exhibit, triggered by the movement of the snow leopards.

Based on our pilot test, it seems like the cologne could very well be successful as an attractant in the wild. This summer, Snow Leopard Trust will apply the cologne technique to try to attract more snow leopards to research sites in South Gobi. At these sites, cameras like the one in our pilot study will capture images to help us identify and track the wild population of snow leopards. Researchers will also attempt to attract the snow leopards for collaring with GPS trackers in order to learn how they use their habitat, which will help us better understand their needs and how we can protect them. 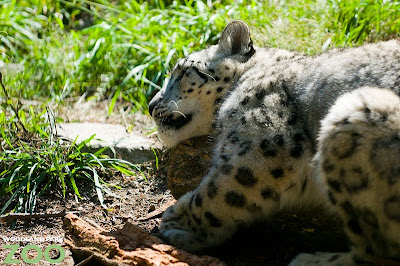 Where did the idea to use this cologne come from? Snow leopards have a strong sense of smell and are stimulated by scent enrichment, something our keepers do with them regularly. But the Wildlife Conservation Society’s Bronx Zoo is credited with discovering the particular potency of Obsession for Men when it applied a variety of perfumes and colognes to trees and rocks in the zoo’s tiger, snow leopard and cheetah exhibits.

For many of our conservation partners, Woodland Park Zoo is a great testing grounds for field research methods such as GPS tracking, animal cams, and DNA studies. The cologne technique tested today is one of several pilot tests that the zoo’s snow leopards have engaged in to help improve research techniques and conservation efforts for their counterparts in the wild. 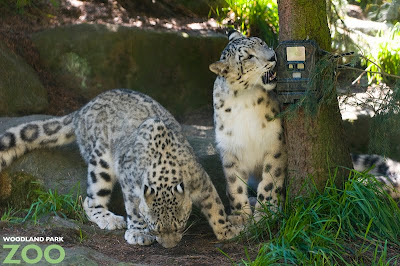 The endangered and very elusive snow leopard will be in the spotlight at Woodland Park Zoo’s fourth annual Snow Leopard Day this Sat., August 14. Hosted by the zoo and the Snow Leopard Trust, this full day of activities highlights the fascinating adaptations of the snow leopard and critical conservation efforts to protect them in the wild. Come join us!

SnowLeopard said…
I read about this on the Saving Snow Leopards blog recently! It's interesting that the big cats are drawn to this scent- I was wondering if any zoos were going to try this "catnip" test with their larger cats. :)
August 13, 2010 at 3:55 PM

pheromone cologne said…
I agree that the cologne proved to be a strong attractant,I like Calvin Klein and I wanna try this.

Anonymous said…
I read about this at facebook! Someone posted a link. Any information about the bombing in Afghanistan and how this is affecting the snow leopard population?
August 23, 2010 at 6:47 PM

Woodland Park Zoo said…
We spoke with our friends and conservation partners at the Snow Leopard Trust about the effects of the war in Afghanistan on snow leopard populations. There have been no formal studies on this yet as it is difficult to have any researchers there while the conflict continues.

For more information about snow leopards and the research being conducted, visit the Trust's site: http://www.snowleopard.org/
August 24, 2010 at 10:34 AM

pheromone cologne said…
Calvin Klein's obsession for men does smell great for sure, thanks.
June 3, 2012 at 7:39 AM