Zoo Corps teen interns Garrett Brenden and Ariel Thompson stood at the edge of a pond in a south Puget Sound protected wildlife area yesterday and released from their hands something precious…hope for the endangered western pond turtle. 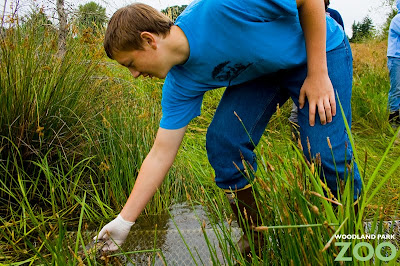 Garrett (shown above) and Ariel have been working alongside zookeepers to raise 76 western pond turtles behind the scenes at the zoo as part of a headstart program to recover their wild population. Turtle hatchlings are collected from the wild then raised here until they are around 2 ounces—large enough to escape the mouths of bullfrogs and large-mouth bass—giving them an edge on surviving in the wild. 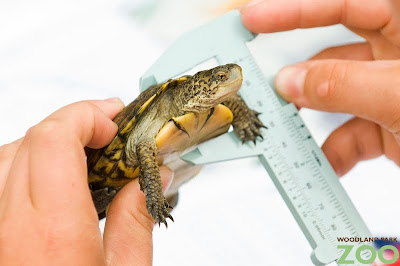 Each summer, we take trips to several protected wildlife areas and release these headstarted turtles back into the wild where we continue to monitor them. Since starting the program in 1991, we’ve seen the population of western pond turtles grow from a dangerously low 150 to now 1,500—a positive sign that this collaborative recovery effort is critical in helping these little creatures make a comeback. Here is a look at yesterday's release with Garrett and Ariel along with Woodland Park Zoo and Washington Department of Fish and Wildlife staff:

“It was wonderful to come into this project almost 20 years after it started because not only can we see the tremendous progress it has made, but also imagine the future impact the newly released turtles will have on this project after we leave,” said Ariel, shown below getting ready to release one of the turtles. 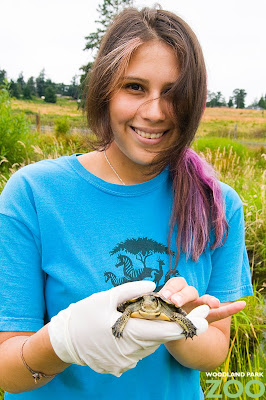 There’s a powerful moment that happens when you open your hand and hear the first plop of the turtle’s legs reaching the water, heading into its new life filled with challenges yet also hope…for the individuals learning to survive and breed in the wild, and for a species coming back from the brink. Congratulations to Garrett and Ariel for all their hard work leading up to that moment and for helping to build a future for this species.

The Western Pond Turtle Recovery Project is a part of Woodland Park Zoo’s Partners for Wildlife conservation initiative, an expansion of the zoo’s efforts and resources in proven wildlife conservation projects. The zoo currently partners with 37 field conservation projects in more than 50 countries around the world. The Zoo Corps teen volunteer program gives motivated teens from diverse backgrounds the opportunity to develop useful skills, increase their knowledge of animals and habitats, and expand their conservation awareness, in a supportive, fun learning environment. If you think this experience may be right for the budding scientist or young nature lover in your life, bookmark this page and look for the next round of applications available later this year.